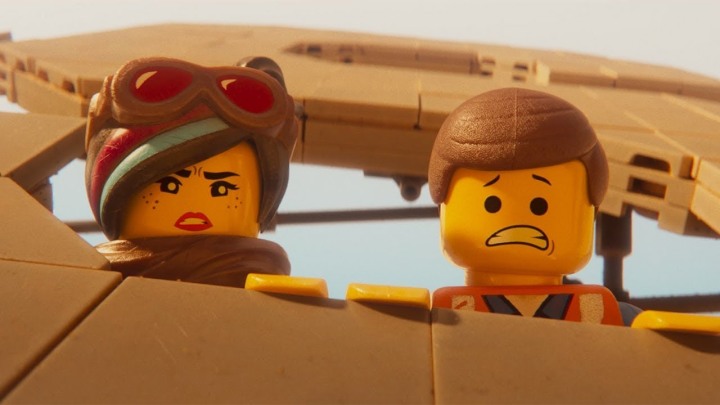 Emmet tried to make peace with the aliens from the Systar System.  But every time something new or shiny appears in Bricksburg, the aliens destroy it.  Five years later, Bricksburg is now Apocalypseburg.  Everyone’s spirits are down and they have become hardened.  Except for Emmet.  Lucy tells him he must change and stop pretending that everything is awesome.  His spirits maybe up but he had a horrible dream.  He dreamt that at 5:15 the abyss of StoreAge would take all his friends into a dark hole.  Lucy worries his dream is a premonition.  He has built a small home on the outskirts of Apocalypseburg for him and Lucy.  It’s not long before the aliens find it and destroy it.  They run to safety in the Batcave but a star’s cries implore Emmet to save it.  Emmet obliges, opens the Batcave, and lets in General Sweet Mayhem.  Mayhem invites everyone to a wedding ceremony at 5:15 for Queen Watevra Wa-Nabi and Batman (without his consent).  Lucy gives a sound ‘NO’ with a kick but Mayhem kidnaps Lucy, Batman, Princess Unikitty, and Benny.  Lucy believes this is the start of Emmet’s premonition.  After seeing his friends being taken away, Emmet flies to the space unknown called Upstairs galaxy.  Emmet flies off course and is saved by Rex, the space cowboy archeologist raptor trainer.  He will fly Emmet to the Systar system and help save Emmet’s friends.  In order to save his friends, Rex knows he must teach Emmet to become a Master Breaker.

The second installment of The Lego Movie franchise does not disappoint (FTC Affiliate Disclaimer).  It includes the Justice League, Suicide Squad, Ruth Bader Ginsburg, and Mad Max with the imagination of a 12-year-old boy and an 8-year-old girl (FTC Affiliate Disclaimer).  It teaches kids the valuable lesson of not hardening yourself because the world is unhappy.  And it teaches them to value family.  While the action will draw in the kids, the jokes will make the parents laugh for days.  This movie blends different animation style to move between the real and imagined worlds.  With stop animation, computer animation, and puppetry, you will be compelled to watch and see the deeper meaning of it all.  The songs will stick with you, especially The Catchy Song (FTC Affiliate Disclaimer).  It lives up to its name.  Also, Everything’s Not Awesome will tug at your heartstrings while making fun of Radiohead (FTC Affiliate Disclaimer).  You and the kids will laugh so hard that seeing it twice is a must.  They even made the credits a catchy, fun song.  See it with the whole family today.

It was perfectly fine without raisins – Princess Unikitty

You’re couching for an ouching – Emmet

I can’t believe another year has passed – Batman 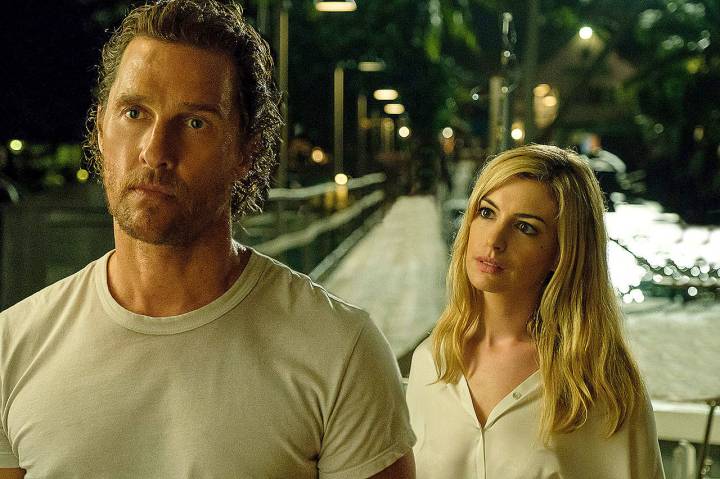 Baker Dill is a freelance fisherman.  He takes tourist on his boat, the Serenity, for money during the day and fishes for money at night.  But there is one fish that continues to elude him.  It is a 400-pound tuna he calls Justice.  He keeps track of its sightings and almost caught it a few times.  One night while sitting in a bar, Baker is approached by Karen.  She wants Baker to kill her husband Frank for $10 million.  Every year, Frank gets bigger, drunker, meaner, and more abusive.  He inspects her body and beats her if he sees any imperfection.  But Karen doesn’t want Baker to kill Frank for the abuse but for their son.  Thirteen years ago, she and Baker had a son named Patrick.  When Patrick was 3, Baker left because he was having problems adapting to life after the war.  He changed his name from John to Baker.  Patrick has confessed to Karen that he has been able to communicate with Baker in a special way.  Baker has that feeling too.  As Baker wonders if he can commit murder, Reid Miller finds him and ask him to test out his company’s new fish finder.  Reid wants Baker to find fish instead of doing ‘something else’.  At that moment, Baker knows there is more to the story.

Um, ok.  Have you ever left a movie with more questions than answers?  And one of the questions you have is ‘What just happened’.  This is that movie.  It is a weird mix of Inception and A Perfect Murder with the gender roles reversed (FTC Affiliate Disclaimer).  You have a feeling you know what is going on until Reid Miller has a drink with Baker.  Then, the movie just enters a weird place.  However, the ending does explain some of the jittery camera angles and character dialogue.  The style of the shots are great and the acting is fun, but the overall story is just weird.  If you are good with weird, see this matinee.  Otherwise, wait for Redbox.

He’s down there, somewhere, making up his damn mind – Duke

Every man has his price – Frank

I am the rules – Reid

If I don’t fish all day, I would think of ways to kill you – Patrick

I’m here to tell you, you were right and I was wrong – Karen