Death of a Cheerleader – Review

Death of a Cheerleader – Lifetime – 2 hours and 3 minutes

Nina looks back on the murder that changed her small, tight-knit town.  On September 1983, Nina decided to change her look. She was tired of being the cookie cutter image of the perfect, affluent town.  She dyed her hair, started dressing in darker clothes, and left her old friends behind, including Kelly.  Kelly is captain of the swim team, a straight A student, and trying out for cheerleader.  The more pressure she is put under, the more she thrives.  She is admired by most in the school, including Bridget.  Bridget decided to make a transformation but the opposite of Nina.  Bridget decides to join an elite club called the Sonata, wants to join the school newspaper, and wants to try out for the cheerleading team.  She wants to become friends with Kelly and her group to be more like them.  She wants to be admired and loved.  In less than 9 months, one girl will be dead, one girl will be a killer, and one girl will be accused.

A remake of the 1994 cult classic, tells the story inspired by Bernadette Protti and Kirsten Costas murder case (FTC Affiliate Disclaimer).  Two girls trying to be the best in a town that expected nothing less.  It is up to you to decide who is to blame for the death of this teen.  Is it the girl who committed the crime? The victim? Or the town for putting so much pressure on its kids?  Now there are some differences from the original.  First, its told from the accused’s perspective.  Not the killer’s POV.  Next, they don’t go into great detail of how the killer thrived after the murder.  Also, the ski trip scene and the mayo on the head scene was removed.  Finally, there is no “friendship connection” letter at the end.  Just the conclusion of the town, the arrest, the resulting jail time, and a monologued realization.  Now, original “Death of a Cheerleader” fans will get to see Kellie Martin grace the screen again as a profiler.  So keep your eyes open.  It’s not as good as the original but it does spark your interest to see it.

I am surprised. Surprised it took this long – Kelly

But it comes so naturally – Trish

I hope you die. I want to see your blood drip – Nina 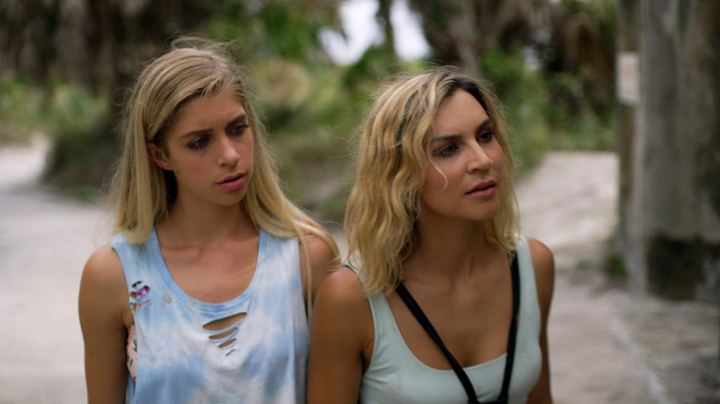 Samantha is ready for a well-needed vacation.  Recently, she found her husband David making out with her employee Barbara.  She is opening another restaurant with too much construction left and not enough time.  And her daughter Ellie will be leaving soon for college but feels like a ping-pong in her parents looming divorce.  To reconnect and clear her head, Samantha decides to take Ellie to St. Petes for spring break.  David isn’t happy that the two are still going on the trip but there is nothing he can do about it.  On their first night, Samantha decides to go to a bar.  She meets Javier.  The two hit it off, take a walk on the beach, and sit in his boat.  He offers to take her out but she doesn’t want to go at night.  Just as the two get close, they are discovered by Ellie.  The two women go back to their hotel.  With a hangover, Samantha wakes up and decides not to go on the boat trip but Ellie convinces her to say yes.  They meet Javier on his boat and sail off.  Javier hasn’t told Samantha that he has been finding women for a special client.   But the client has no need for Ellie.  Samantha and Ellie will have to fight to save themselves, find land, and make a connection.

So the first hour is painful to watch as this mother/daughter duo make every dumb Lifetime mistake in the book.  This movie displays Samantha as being a tough businesswoman.  However, she becomes a dolt when a new man comes around and pays her a little attention.  If you hang on for the second hour, it gets better.  The two work together to survive being lost at sea, make camp on a deserted island, and finally make a connection to the outside world.  And stay tuned for the twist and a possible part 2.

Hell of a vacation, huh? – David

Professor Amy works in the English Department as a Crime Fiction Professor.  Her father is a retired teacher and an accomplished author.  Amy pays close attention to her students and details.  It’s this attentiveness that forces Amy to notice Lacey.  Lacey is a campus reporter who received a threatening note while investigating the disappearance of her boyfriend Rex.  Lacey is going through a lot but she decides not to tell Amy and Amy doesn’t want to push the subject.  Later, Amy meets Det. Travis and Det. Claire.  Travis is new to town but a seasoned detective.  Claire is a rookie, the boss’s daughter, and Travis partner.  Travis and Amy get along well until Lacey goes missing and Rex’s body is found.  Travis wants Amy to leave the detective work to him.  Amy wants to use her knowledge of crime and the campus to help him.  It doesn’t take long for Travis to see Amy as an asset and not a liability.  The two will work together to find Lacey, Rex’s killer, and a million dollar plant.

A strong start to a new sleuthing series.  With a college campus setting, there are a lot of potential storylines to follow.  While Hallmark may not get as risque as Law & Order, there is still plenty of crimes to solve.  The characters are all well-developed with the potential to grow in the future.  It will even be great to see how Claire comes into her own as more plots are written.  Now its great to see Travis accept Amy’s help but will this newfound awareness of her abilities last.  Only time will tell.  The overall plot did seem to be all over the place in the beginning but it came together at the end.  Enjoy the new series.

Never walk away from a challenge – Prof. Amy