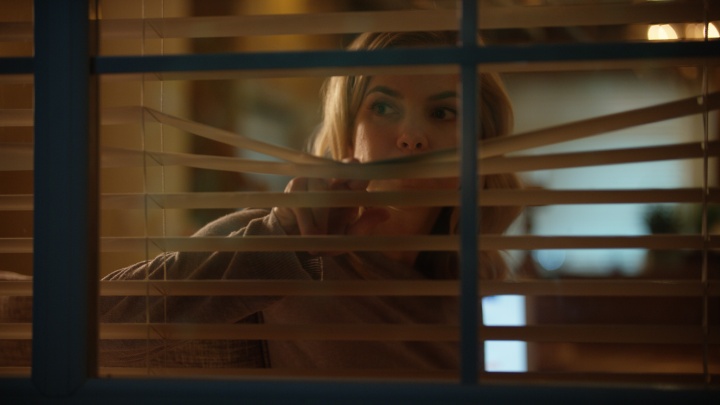 Alison, a former lawyer, works in a big box outlet store.  She doesn’t want to sell her childhood home, so she decides to rent her basement for some extra cash.  Her first renters are a couple with a daughter.  They look trustworthy and she did some background checks before choosing them.  Alison is taken aback when she sees the husband at her front door alone.  James apologies and tells her its an old picture.  He and his wife Hanna are separated but they still get along.  He will be the only person staying.  She takes a deep breath and decides to let him stay.  The first time he oversteps his boundaries by cooking in the kitchen, she says nothing.  The next time, she speaks up.  But when he tells her he fixed her sink, she apologizes and starts to let him have more freedom throughout her house.  Soon he is planting flowers and meeting her friends.  Her friendship with him grows at just the right time, people around her are being murdered and the police believe she may be the killer.  She will only see the truth when her best friend Sarah’s gut instinct kicks in and discovers the evil in Alison’s bed.

This movie just doesn’t grab your attention.  It does try but the plot is overdone on Lifetime.  However, it does speak to a female issue of being over-apologetic.  It can cause someone to not stand up for themselves even if it is to their own detriment.  Alison is guilty of this at her past job, current job, and her relationship with James.  Learning from that character flaw is one great aspect of this movie.  Also, it displays an awesome best friend in Sarah.

You just hung up on me – Sarah

Three years ago, Jason and Carley met in culinary school.  While Jason, the son of a diner chef and owner, like to stick to the classic recipe, Carley prefers to go off script.  Carley has lived under the shadow of her famous chef father but wants to make her name for herself.  Taking risks with recipes is her way to rebel and get her father’s attention.  However, Jason left school without any notice or saying goodbye.  Now, Carley is a professional chef that studied with France’s finest chef.  She loves the job but it doesn’t allow her to be creative.  Jason is a chef at a high-end restaurant but they want to cut cost.  He knows the best ingredients makes the best dishes.  Both are encouraged to apply for Kitchen Showdown Chicago.  Jason is afraid he doesn’t have the experience and Carley is afraid her father will disapprove.  The show’s grand prize is financial backing to start their own restaurant.  This is their dream.  And it is close to coming true when they are both picked to go on Kitchen Showdown Chicago with 4 other chefs.  They have to survive 5 rounds to win.  And the moment they lay eyes on each other they start their playful banter back and forth.  The producers and other contestants can see the love in the air but there can only be one winner.

The overall Hallmark flow is there but the end is a shock.  However, it’s up to you to determine if the ending is sweet or a letdown.  Some will see it as sweet when love conquers the competition. While others feel let down by not knowing the judges’ true decision.  The movie is mildly funny but is relatively background noise that can make you hungry.

Bouillabaisse is not your best look – Carlie

Your Husband is Mine – Review

Your Husband is Mine – LMN – 2 hours and 0 minutes 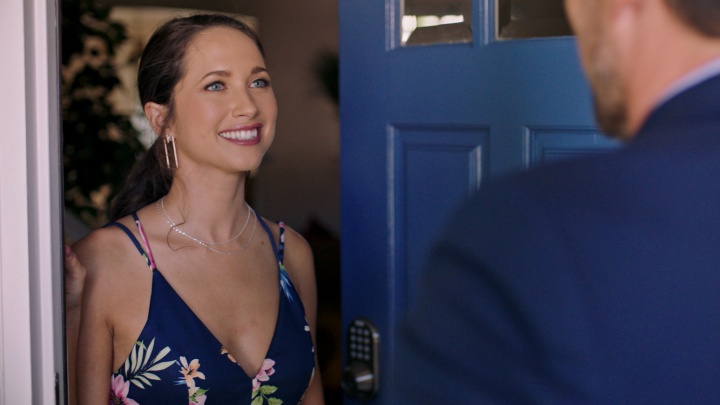 Katie sees the new neighbor moving in the house next door and makes a welcome basket for her.   After a few days with no response, the children’s author worries she won’t be able to connect to her new neighbor.  Katie’s husband Dan tells her to stop trying so hard and the new neighbors may just be loners.  However, during her run, Lousia catches up to Katie.  She introduces herself and says they keep missing each other.  Louisa moved to get a new start because she dated a guy for 10 years but he never wanted to settle down.  She and Katie spark a friendship.  When Katie is attacked, Louisa is there to help treat her wounds.  Dan comes home to see Katie bruised and Louisa, his ex-girlfriend, treating Katie’s injuries.  They both keep quiet around Katie but the next day, Dan confronts Louisa.  He gives her a warning but she doesn’t care.  Worried about her safety, Dan confesses his past to Katie.  She is understandably upset but trusts her husband.  And that’s a good thing because when Dan is arrested for murder, he will need Katie in his corner.

This is your typical Lifetime plot with a frame job.  Crazy ex comes back and wreaks havoc until the innocent party stops them.   It just doesn’t have a memorable moment throughout the entire film.  Nothing that leaves a chill up your spine, makes you jump, or laugh.  While it does follow the same plot, the ending does leave a mystery for a part 2.  Hopefully, it will be more compelling than this movie.

What are you doing here – Dan

We dated for 10 years – Louisa

So here’s what we know, Tara’s body was found in the woods after disappearing 3 years ago.  Back then, her husband Mike was tried for her murder but acquitted after the defense presented another possible killer.  While the court found Mike not guilty, the public did not.  Tara’s twin, Tim, still thinks Mike is the killer.  Mike and Tara were known to have marital issues but Mike denied the rumored affair with Betsy.  And Betsy denied it too.  Before she went missing, Tara stalked, threaten, and keyed Betsy car.  Tara also traveled north before she died but no one has any idea where or why she went.  With a whiteboard, pictures, and police files, Alex promises Mike she will try to find who killed Tara.

This next installment of Chronicle Mysteries is better than the first.  It gives you the mob, counterfeiting, and a knockdown, drag-out fight.  You will be on the edge of your seat with each new revelation and secret. Also, they make sure Tara isn’t squeaky clean.  Having a victim with ‘not so nice’ behavior helps give more suspects and motives to the plot.  And it makes for juicy gossip.  You will be second-guessing yourself and Mike every step of the way.  The acting is superb and the writing is the absolute best on HMM.  Don’t just record and watch.  Save it to watch over and over again.

Why did you pick this case – Tim

You know if you take a deep breath, I hear it hurts less – Drew

You’re into it. Admit it – Alex

Tell me you got a good story – Shawn