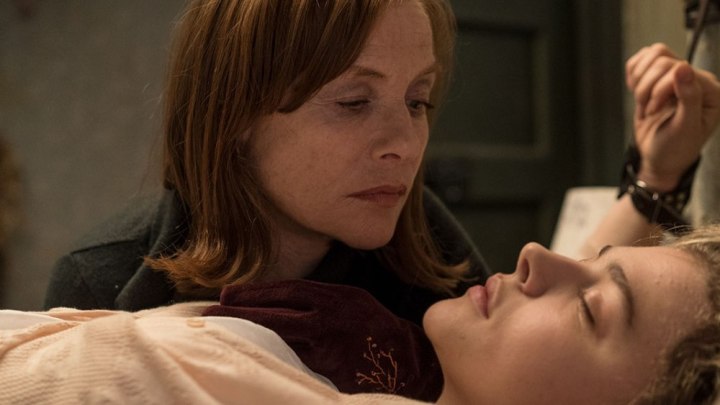 Frankie works as a waitress in an upscale restaurant. She is still reeling over the loss of her mother when her father starts dating again. Her friend and roommate Erica urge her to talk to her father and repair their relationship. Greta is an older French widow who misses her daughter Nicola. Nicola moved to France to study music, leaving Greta extremely lonely. After a long day at work, Frankie finds a purse on the subway. She tries to turn it into the lost and found but no one is in the booth. She takes it home and uses the ID to discover the owner and her address. Frankie delivers the purse to Greta and is invited in for coffee. Frankie agrees and the two have a chat. They bond over losing loved ones but Frankie suggests that Greta get a dog. Frankie’s mother worked with dogs in the past and she is willing to help Greta find a pet to keep her company. During their conversation, Frankie hears a commotion. Greta explains the neighbors are doing construction. And she gets Frankie’s number to help if she decide to get a dog later. The next day, Greta decides to get a dog and calls Frankie. The two walk, talk, and take photos. They share a love of cooking so Greta invites Frankie to dinner the next day. Erica thinks their relationship is strange and worries Frankie is using Greta as a replacement mom. Frankie is furious at the notion and leaves for Greta’s. During preparation, Frankie tries to find candles but she finds several of the same purses, each with a post-it attached with a different girl’s name and number. Frankie feigns sick and leaves. She decides to ignore Greta. But once Greta has you on the hook she will never let you go. Just asks all the other girls who found her bag.

This thriller plays with the audience just as much as Greta plays with Frankie. Rest assured this isn’t a horror movie. So you won’t jump out of fear. But you will get uncomfortable as Frankie makes several mistakes at the start of the friendship. You will feel you have a handle on what is going on but great editing will take you on a different path. Let it be known that certain parts of the movie Greta will remind you of a Lifetime movie (don’t click the link unless you want a big spoiler). However, in the end, Frankie asks a question and you will want the answer but you will only get a vague response. With all the plot changes to fool the audience, this movie does feel like a Lifetime movie with a bigger budget and better actors. And it proves one saying true: No good deed goes unpunished. If you like suspense and want to kill 2 hours, see this matinee.

What a mess. What a dreadful, terrible mess – Greta

This is Manhattan. If you find a bag, you call the bomb squad – Erica

I should just ignore her, right – Frankie 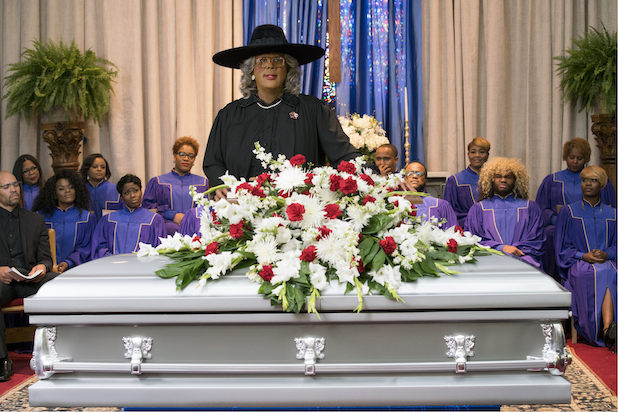 Bryan has the tough task of driving Hattie, Bam, Joe, and Madea to a 40th-anniversary party for Anthony and Dianne. After 3 hours, he is grateful to arrive at the hotel and get their rooms. In the hall, they see Vianne and Anthony’s eldest son AJ and their family friend Renee in a doorway freaking out. Anthony was cheating with Renee and AJ overheard it. AJ ran into the room after recognizing his father’s voice. But when AJ entered the room, his father had a heart attack. Bryan gives him mouth to mouth resuscitation and he is rushed to the hospital. Vianne meets Bryan and his family at the hospital. Vianne brings her youngest son, Jesse, and her only daughter, Silvia with her for support. AJ’s wife Carol, Silvia’s husband Will, and Jesse’s fiance Gia come to the hospital too. Hattie reveals that Anthony was in a hotel when they found him but Madea stops her before she can spill the beans about the affair. And AJ isn’t talking either. Next, the nurse enters and tells everyone that Anthony passed away. Heartbroken, they all head back to the Vianna home. Vianne decides to have the funeral in 2 days and ask Madea to help. When AJ, arrives the sees Renee and snaps. While his anger is confusing to the family, Renee walks out and AJ follows. He threatens to tell everyone if she comes back to the house. Renee counters AJ by telling him she knows why he was at the hotel too. She saw Gia, his brother’s fiance, leaving his hotel room. She knows they are having an affair too. And if he talks, she’ll talk. With 2 affairs and a funeral, it will take Madea’s entire family to help straighten out the mess.

Like a lot of Tyler movies, he throws a bunch of characters at you at the same time. It’s a lot to take in, remember who is related to whom, and remember who is married to whom. You will get characters you know and love like Madea, Bam, Hattie, and Joe (FTC Affiliate Disclaimer). But you will see Tyler’s new character, Heathrow. A wheelchair-bound, ex-smoker who speaks with an electrolarynx and has Joe’s sense of humor (FTC Affiliate Disclaimer). This movie will make you say O.M.G at the one-liners, big reveals, and heavy-handed (pun-intended) advice. But nothing is truly memorable. It is funny at the moment but not quotable. Tyler fans, you will see sets from other TV shows like The Have and Have Nots (FTC Affiliate Disclaimer). If you are a fan of Madea, see this movie at the matinee price. Otherwise, wait for Vudu.

I wanna thick chick on a cat – Heathrow

You don’t need nothing but me – AJ

And I said yes – Vianne

I know, that was inappropriate – Madea