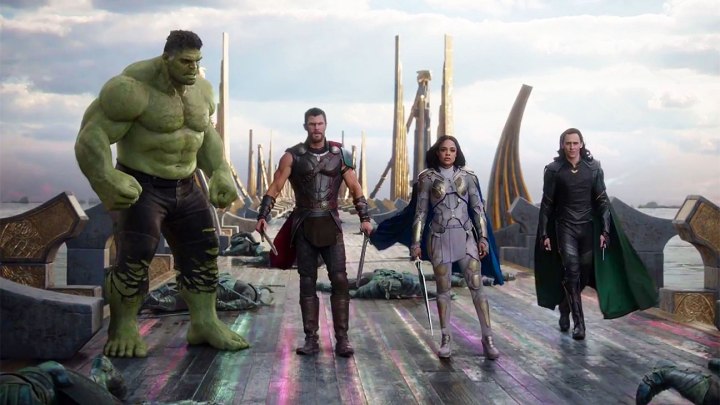 Thor has been working to stop the prophecy of the Asgard’s demise called Ragnarok.  However, when he gets home, he learns that the 9 realms are falling apart.  Thor knows his father would never let that happen, so he confronts him and exposes that it is Loki.  Thor demands to be taken to their father.  Oden lets his sons know that Hela is on her way.  She is the Goddess of Death, bent on revenge, and their sister.  As the oldest, Hela feels she is the rightful heir to the throne.  She despises Oden for changing his way and locking her away.  While absorbing the news of a new found sister, Thor and Loki stand before her.  During the fight, Loki calls for Heimdall.  But all three are swept up in the Bitfröst Bridge while still fighting.  Hela throws Loki and Thor out; she heads to Asgard to rule while the brothers land on the planet Sakaar.  Hela sets her sights on taking over all the realms and by destroying everything in her path.  Her only obstacle: someone stole the Bitfröst Sword.  She must find it to continue her domination.

Be prepared to laugh and be in awe.  When there isn’t a physical battle, you are given a verbal battle.  Sakaar is given its own color palette which completely separates it from Asgard.  New characters are introduced with clear and concise backstories which allows them to shine with their own personalities.  Since this movie is one of the funniest in the Marvel series, the humor causes special effects to be more cartoonish than realistic.  So, the Hulk looks like a cartoon next to a real object.  At times it just doesn’t blend.  Don’t worry, you will get the joy of cameos from Stan Lee and Dr. Strange.  As well as post end credit scenes.  So see this movie at full price and IMAX, before someone tells to much.  3D is not necessary

I have been falling for 30 minutes – Loki

Let’s call it a tie – Grandmaster

I see you. But you are far away – Heimdall

Many apologies your highness – Valkyrie

Murder on the Orient Express – Review 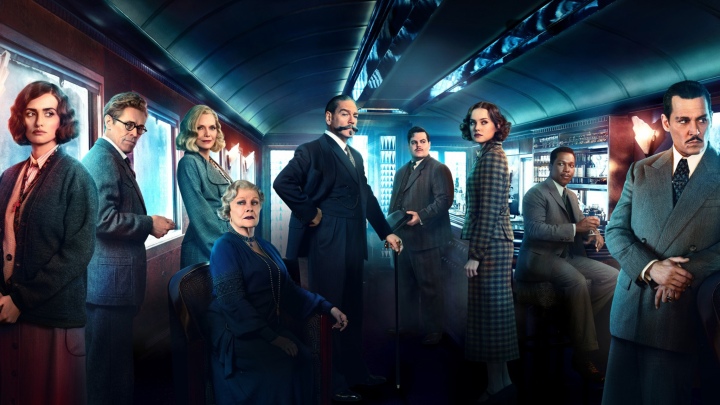 World famous detective Hercule Poirot just finished a case at The Wailing Wall and wants to take a vacation.  Just as he is planning to relax, he gets a new case from London and must return.  Poirot’s friend Bouc (director of the Orient Express) offers him a ride on the full train.  During a dessert service, Poirot is approached by Samuell Ratchett.  Ratchett has received several death threats and wants to hire Poirot as his bodyguard.  During the night, Poirot sees someone running in a red robe and hears noises coming from Ratchett’s room.  The butler knocks on the door, hears “It’s nothing”, and walks away.  Poirot goes to his room and sleeps.  Later an avalanche, the train derails and leaves them all stranded together.  The butler knocks on everyone’s door but when Ratchett doesn’t answer, Poirot opened the door.  Inside Ratchett is dead with 12 stab wounds to the chest.  Poirot finds a partially destroyed note, a bloody handkerchief with the letter “H” on it, and a cup of barbital drugged coffee.  Poirot must discover the killer before the train is back on the tracks.

Based on the novel Murder on the Orient Express by Agatha Christie, this movie has to be watched twice (FTC Affiliate Disclaimer).  There is so much going on with so many characters, it’s hard to keep up.  While telling a grim tale, it does provide a few laughs at the human condition.  You feel an urge to solve the mystery along with Poirot.  This movie allows you to come up with your own theories as Poirot questions each suspect.  But be warned this movie DOES follow the book; no new suspects, plots, or murders are given.  The director, Kenneth Branagh, must be applauded for his use of continuous shots as Poirot enters and leaves the train.  Also, some scenes are shot from above, allowing the audience to be a fly on the wall or ceiling.  Seeing the behind the scene and the director’s commentary on this movie will be amazing.

Order me the fish – Princess Dragomiroff

Vice is where the devil finds his darling – Pilar Estravados

I blame the chicken – Hercule Poirot