Death on the Nile – Review 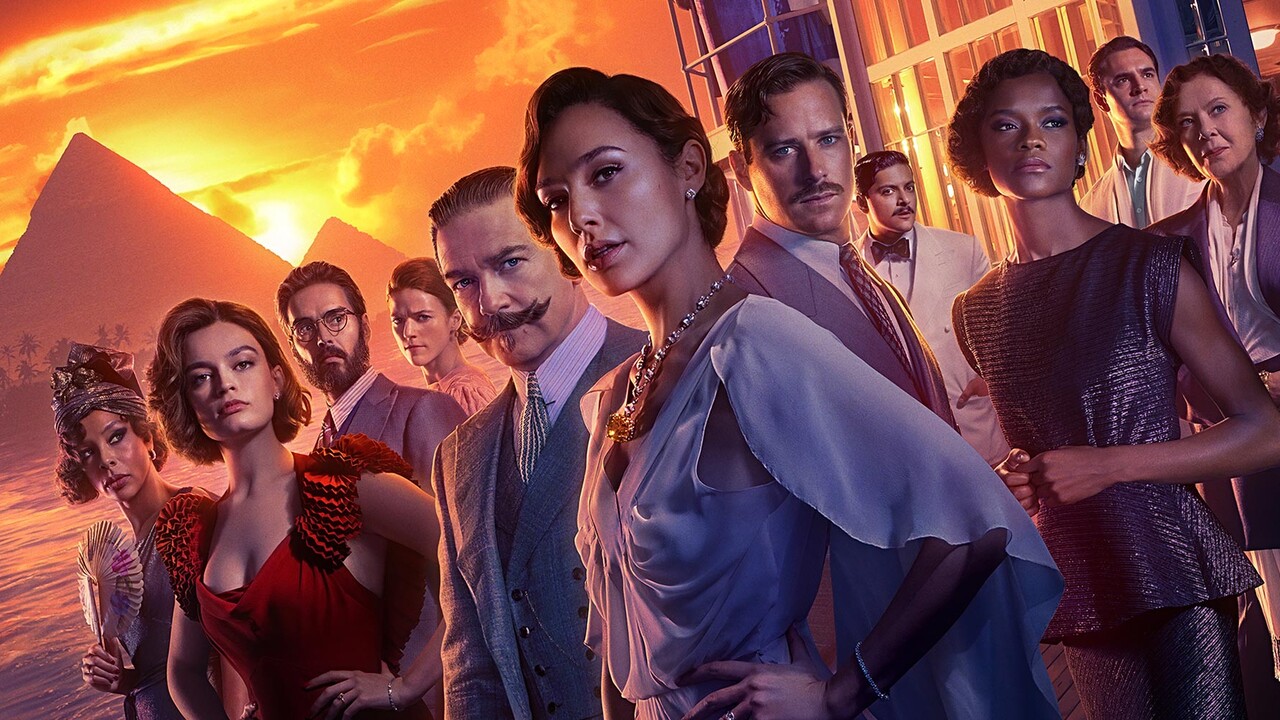 Hercule Poirot sits at a jazz club and watches a love story develop.  Jacqueline introduces her fiancé, Simon, to her friend, Linnet.  Jacqueline asks Linnet to give Simon a job, and Linnet does.  To celebrate, Jacqueline asks Simon to dance with Linnet.  Later, Hercule tries to enjoy dessert in front of a sphinx.  Then he sees a man flying a kite from the middle of the pyramid.  Hercule runs to the man to admonish him but stops when Hercule sees it’s Bouc.  Bouc doesn’t work on the Orient Express.  Instead, he is a professional son.  Bouc takes Hercule to meet his mother, Euphemia, and they invite Hercule to a wedding party.

At the party, Hercule sees Simon with his new bride, Linnet.  Stunning Linnet wears a $2 million Tiffany necklace and a smile for her guests.  For Hercule, this is act two for their love story.  Hercule listens as Bouc tells Hercule about Linnet’s godmother, nurse, cousin, ex-fiancé, school friend, and personal entertainment.  But a hush falls over the crowd when Jacqueline walks into the room.  Linnet backs away in fear and walks out of the room.  Later Simon and Linnet approach Hercule to request his services to stop Jacqueline.  During each leg of their trip, she appears unwanted to spoil their fun.  Hercule doesn’t believe he can do anything because Jacqueline hasn’t broken the law.  At the market, Hercule spots Jacqueline and attempts to plead to her better nature.  Jacqueline tells Hercule that she will never give up, and she has the perfect thing to fix a broken heart: a 22.  Hercule tells Simon and Linnet that they should end their trip, go home, and stay on the property until Jacqueline calms down.  But Simon refuses to let Jacqueline ruin their vacation, and he decides to gain distance by renting a ship, The Karnak, to travel the Nile.  And they invite Hercule to come aboard.

With everyone on board, Linnet takes a moment to pull Hercule aside.  She wishes they had gone home because she doesn’t trust anyone on the ship.  They travel to the rock temples at Abu Simbel, and Simon grabs Linnet for some alone time.  Then a rock comes close to killing the couple, but Hercule doesn’t think it is an accident caused by the sand storm.  They board the boat in fear and find a shock.  Jacqueline awaits their return.  Linnet wants Jacqueline to leave the ship immediately. But Jacqueline bought a ticket.  After night falls, Linnet takes a pill and resigns to her room.  Simon grows tired of Jacqueline’s actions and makes his feelings known.  Jacqueline grabs her gun and shoots Simon in the leg.  Others pull them apart and Linnet’s school friend, Rosalie, kicks the gun under the couch.  Linnet’s ex-fiancé, Dr. Linus, tends to Simon’s leg, and Linnet’s godmother’s nurse, Mrs. Bowers, calms Jacqueline down with morphine.

In the morning, Linnet’s maid, Louise, finds Linnet dead with a gunshot to the head and her necklace missing.  They grab Hercule and ask him to look into the murder.  At first, everyone blames Jacqueline, but Mrs. Bowers says she never left Jacqueline’s side.  Simon doesn’t know anyone else who would hurt Linnet.  However, Hercule remembers that Linnet was afraid of everyone on the Karnak.  Hercule swears to find the killer before they hit land.

Based on Death on the Nile: A Hercule Poirot Mystery by Agatha Christie, this movie doesn’t pick up exactly where the first one left off, but it does bring the films together (FTC Affiliate Disclaimer).  You must watch from the beginning because the writer explains Hercule’s famous mustache and wartorn start.  Within 30 minutes, the plot introduces all the characters and their connection to Linnet.  You don’t get to the juicy details of their relationship until Hercule’s interrogations.  This movie has scandal, double-cross, and manipulation to keep you engaged in the plot.  This chapter in the Hercule series is better than the first and will make you want more.

What do you think of my kite – Bouc

Money is the only thing a lady can rely on – Euphemia

I am not wrong – Hercule Poirot

I don’t think I ever loved you – Simon

I will buy the whole country – Linnet

Popstar Kat Valdez will marry singer Bastian in front of 20 million fans, performing their hit song Marry Me (FTC Affiliate Disclaimer).  While she is happy to exchange nuptials, late-night comedians make fun of Kat because this is her 4th marriage.  As the day draws near, Kat wishes it was a private ceremony.  Kat’s manager, Colin, tries to keep Kat’s mind focused on the show and her endorsements.  And her assistants, Tyra and Melissa, keep Kat looking gorgeous and on film for social media.

Charlie is a single dad to Lou and works as a math teacher at Lou’s school.  He coaches the math club and wishes Lou would rejoin.  But after an embarrassing moment at last year’s competition, Lou won’t consider it.  Charlie feels distance growing between him and Lou because she is getting older and has a fun stepdad.  In between classes, Charlie’s friend, Parker, finds him watching over Lou in the hallway.  Parker has a way to make him the fun dad.  Parker broke up with her girlfriend and obtained three tickets to Kat’s show.  Lou can’t wait to be at the ceremony and concert of the year.

At the concert, Parker holds a sign that says ‘Marry Me,’ and Lou is having the time of her life.  Backstage, Kat changes costumes when she notices everyone looking at their phones.  She grabs Colin’s phone and sees an article on Page Six.  It shows Bastian cheating with Tyra.  As the gravity of the betrayal hits Kat, her platform lifts her to center stage.  Parker gives her a sign to Charlie and grabs her phone to record the wedding.  Kat explains that she was in love with a fairy tale.  Now, Kat wants to do something new.  She points to Charlie’s sign and says yes.  They pull Charlie on stage, and the two get married.  Kat’s team whisk her off stage while Bastian and Tyra try to explain.  Colin grabs Kat and Charlie and puts them into an SUV.   On the ride to Kat’s penthouse, Charlie sits in amazement.  He can’t believe he got married.  Kat gets out and tells the driver to take Charlie home.

Later, Colin wants Charlie to sign an agreement and annul the marriage.  But Kat wants to stay married so she won’t be a punchline.  Colin did a background check and discovered that Charlie has a regular life.  So he agrees to go with Kat’s wishes.  They pick Charlie up for press junkets and social media posts.  But how long can they keep up the act before it becomes real? And will it last after a Grammy nomination with a surprise performance with Bastian?

Based on Marry Me by Bobby Crosby, this film is about Jennifer Lopez being herself (FTC Affiliate Disclaimer).  That’s why this movie feels honest and authentic.  Also, Owen Wilson’s self-deprecating yet charming sense of humor makes this love story believable.  They fall in love as they get to know and challenge each other.  She challenges him to get on social media, and he gets her to be independent.  That independence is the juxtaposition of the film.  Kat works so hard to show an image of female strength, but she falls apart for love and needs constant assistance.  This storyline is nothing new to Hallmark fans because it follows the network’s format.  The only difference is it’s a visual album for a catchy soundtrack.  If you are a fan of J. Lo or Owen, see it at the matinee price. Otherwise, catch it on Peacock.

You can’t marry an idea – Kat

Remember if you sit in the question, the answer will find you – Charlie

She’s making a fool of herself – Bastian

This is a manic response to an insane situation – Colin

Get your ass to the Garden – Lou

Travis completed another extraction for FBI Director Gabe and got the undercover agent out safely.  When Travis meets with this daughter, Amanda, at his granddaughter’s birthday party, Travis promises to quit his dangerous job.  He wants his granddaughter, Natalie, to have positive male role model in her life.  Amanda is not comfortable with this.  She believes his dangerous job impacts his OCD, and it’s having a lasting impact on Natalie’s mental state.  He promises to put Natalie first.

Mira is a reporter that found a story about social activist and political hopeful Sofia Flores.  A few weeks ago, Sofia was a hit-and-run victim.  But Mira thinks there is more to the tale.  The police say they have a suspect but won’t release the name.  However, Mira discovered that the uber driver gave a fake name, and the uber’s license plates were fake.  Her boss, Drew, has an easy explanation for everything, but Mira keeps digging.  One day, Dusty calls Mira with evidence to prove her suspicions are correct.  But four police officers stop his call.  They spot Dusty’s gun on the passenger seat and direct him to get out of the vehicle.  He complies but starts to fight.  They take him down and to the precinct.  Travis bails Dusty out but tells the police to keep it off the books.  Gabe ordered Travis to capture Dusty and bring Dusty back to him.  Dusty escapes and runs to Mira when Travis is distracted by his duties as a grandfather.  Mira comes outside to see Travis chasing Dusty.

Travis reports Dusty’s escape and contact with Mira to Gabe.  Gabe tells Travis to visit Mira.  Travis tells Mira to stay away and politely threatens her, but Mira can’t forget the story.  Soon, Dusty contacts Mira again, and they meet up.  Travis is in hot pursuit.  After a chase, two agents kill Dusty in front of Travis and Mira and walk away.  Travis knows something is wrong and confronts Gabe.  When Gabe doesn’t give him information, Travis quits.  However, Gabe won’t let him and hides Travis’s family.  Travis searches high and low for his family but comes to an abrupt halt when he gets a call from Mira.  She believes someone murdered her boss and sullied Dusty’s name.  She needs Travis to help her find the truth behind Dusty’s last operation.  And it all revolves around Sofia Flores.

This movie is exciting, but the overall conclusion falls flat.  With car chases, shootouts, and electrocution, you expect more to the ending than a one-liner joke.  You assume a twist about Mira’s father, Amanda’s estranged husband, or Natalie’s stranger.  This plot throws out a lot of open-ended information but offers no conclusion for them.  Don’t be mistaken: the action is thrilling, intriguing, and inventive.  It’s the plot that feels empty and soulless.  It’s an action movie, masking as a political drama, and should have found a home on Paramount+.

You work for me.  You are my weapon – Gabe

How do you feel about explosives – Travis