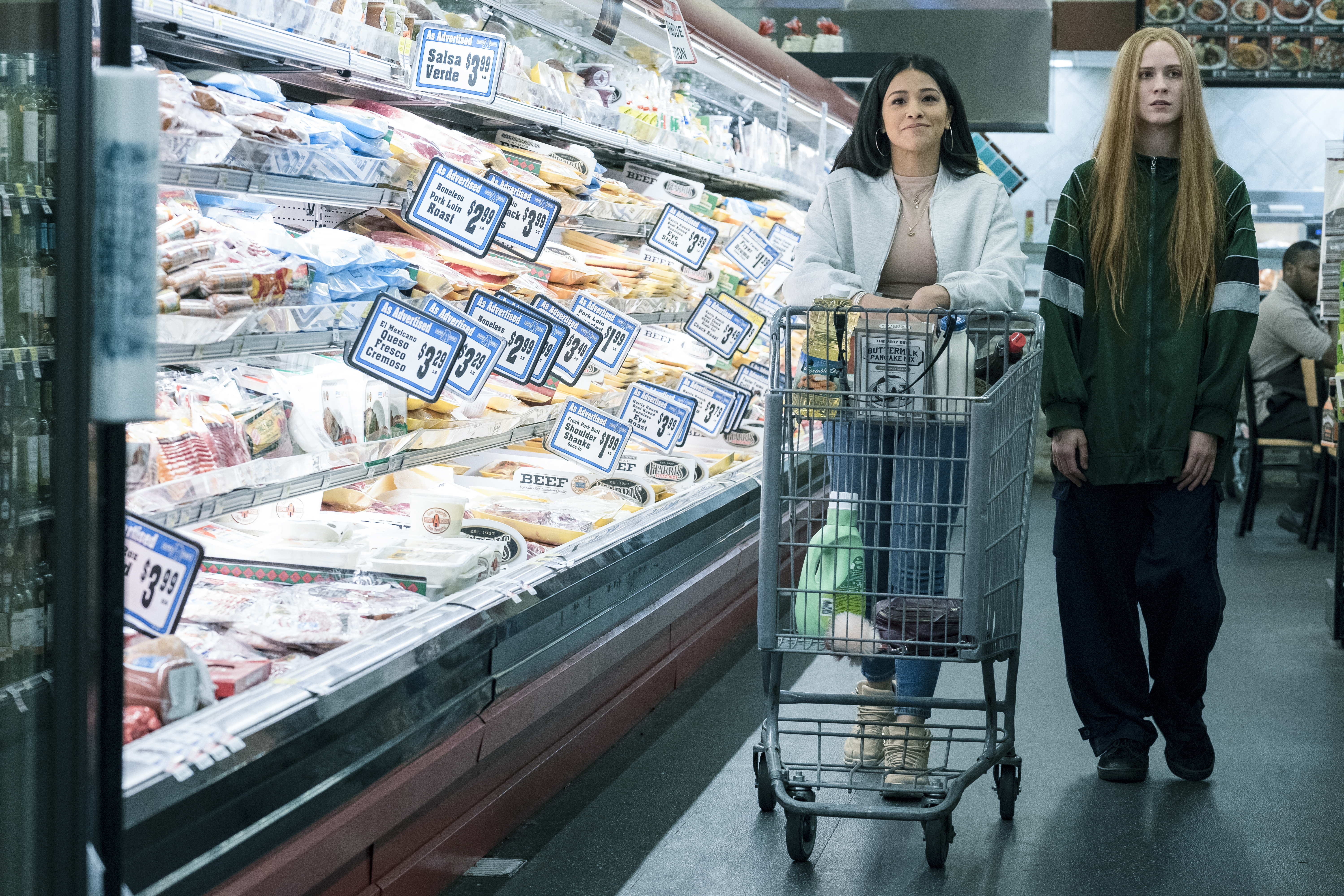 Old Dolio learned the art of the hustle from her parents, Theresa and Robert.  They rob mailboxes, forge checks, and note the blind spots in any cameras coverage.  They live in a run-down office that leaks suds once a week for $500 a month.  But they missed the last three months rent.  So, Old Dolio comes up with a plan.  They won a trip to New York, so they will fly together but pretend they don’t know each other on the way back.  Theresa and Robert will pick up all three bags, and Old Dolio will declare her bag lost.  Since she insured the bag, the airport will send her a check for $1575 if they can’t find it.  This scheme will easily cover the $1500 they owe for the rent.  However, Theresa and Robert change their plan when they meet Melanie on the flight back.  Melanie realizes something is up with the pair, so they let her in on their heist.  Instead of Theresa and Robert picking up three bags, Theresa, Robert, and Melanie get the bags, while Old Dolio files the claim.  When Old Dolio meets up with them at a bar, she is not happy to see Melanie there.  For Melanie, they are having the Ocean’s Eleven adventure she always wanted, but, to Old Dolio, Melanie is a liability (FTC Affiliate Disclaimer).  Then, Melanie comes up with a new plan.  Often, elderly clients ask her to visit their homes.  She plans on complimenting their heirlooms and hopes they will offer it to her.  Next, she will pawn their heirlooms for money.  At the first mark’s home, seeing Robert steal checks leaves Melanie stunned.  She had no idea they were that devious.  But she stays with them for the next victim.  During that heist, Old Dolio discovers the mark wants them to carry-on typical family life until he dies.  Seeing her parents act like real parents with Melanie leaves Old Dolio wanting more from them.  When Old Dolio hears Theresa call Melanie hun, Old Dolio offers Theresa all the insurance money if Theresa can call her hun too.  Theresa can’t do it.  Theresa tells her they don’t hug, dance, make pancakes, call each other pet names, or give birthday presents.  It’s just not them.  Melanie interjects and calls Old Dolio hun.  Melanie offers to do everything Old Dolio’s parents didn’t do for her if she gives Melanie the money.  Old Dolio says yes, but Melanie knows Old Dolio is addicted to them.  And when they come around, Old Dolio will need another fix.  With $1575 on the line, you know they are coming back.

Robert and Theresa are neglectful, abusive, and heartless parents.  It’s evident in all of Old Dolio’s actions.  She hates to be touched, looked at, or loved by anyone.  She jumps when people come too close and believes everyone has an angle.  In the first 15 minutes, you feel hopeless and sad for Old Dolio, her past, and her future.  This movie will hit a nerve for anyone who has grown up in an emotionally dysfunctional family.  Old Dolio has been a tool for her family’s schemes, not their child.  She has to decide to skim like her parents or be a Kajillionaire of spirit.  But Melanie has problems with her mother too.  Her mother is loving but doesn’t listen to her.  Instead, she buys her things.  It makes Melanie easy pickings for Robert and Theresa.  If you like an independent movie with a conclusion, see this one matinee.  But don’t expect to laugh or cry.  Expect to leave with a better understanding of a loving family.

If a man gives you wood or anything made of wood, he is saying you give him wood – Theresa

Rich people can be so cheap sometimes – Robert 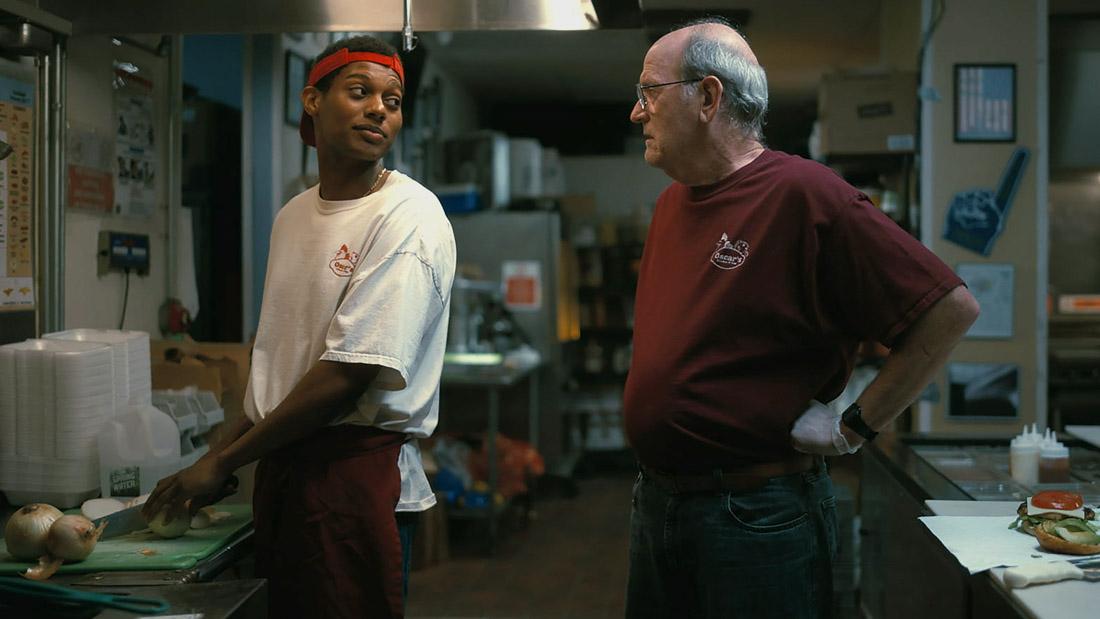 At Oscar’s Chicken and Fish in Albion, Michigan, Stanley works the night shift and does it with grace.  He knows the customers, the flow, and the rules.  After 38 years, Stanley is ready to leave and take care of his mother in Florida.  With every penny saved, Stanley plans on buying a car and making the drive down, but he has to train his replacement before his boss will give him his last check.  Stanley’s boss, Jasmine, told him the new employee’s name is Javon.  Javon is on probation, the father of one, and doesn’t have a direction in life.  He’s not sure what he wants to do, but he knows what he doesn’t want to do.  And he doesn’t want to go to jail again, so he needs the job at Oscar’s.  If he doesn’t keep this job, he will go back to jail for the remainder of his sentence, 10 months.  Stanley’s by the books, work at peak performance, and calm demeanor is in stark contrast with Javon’s out of the box, minimal effort, and confrontational behavior.  As the two learn from each other and bond over frozen patty pucks, drunkards, and responsibilities, what will it take for them to turn on each other?  Money.

This movie covers a lot of topics in a short amount of time.  Topics like the wealth gap, capitalism, minimum wage, ageism, racism, white privilege, social perception, the probation system, and lying all within this short relationship.  There isn’t a winner or a loser in this story, just a sad honesty.  Be prepared, The Last Shift has a independent movie ending.  It doesn’t end with flowers, song and dance, or a true conclusion.  You will leave feeling these two people are still living within time and space.  With that, there is a conclusion in their relationship, but no resolution.  That is the hardest part to deal with when you leave the theater.  You want them to air out their feeling and resolve things with compassion or force.

I didn’t get this smart by being stupid – Stanley