Dying to Be a Cheerleader – Review

Dying to Be a Cheerleader – Lifetime – 2 hours and 0 minutes 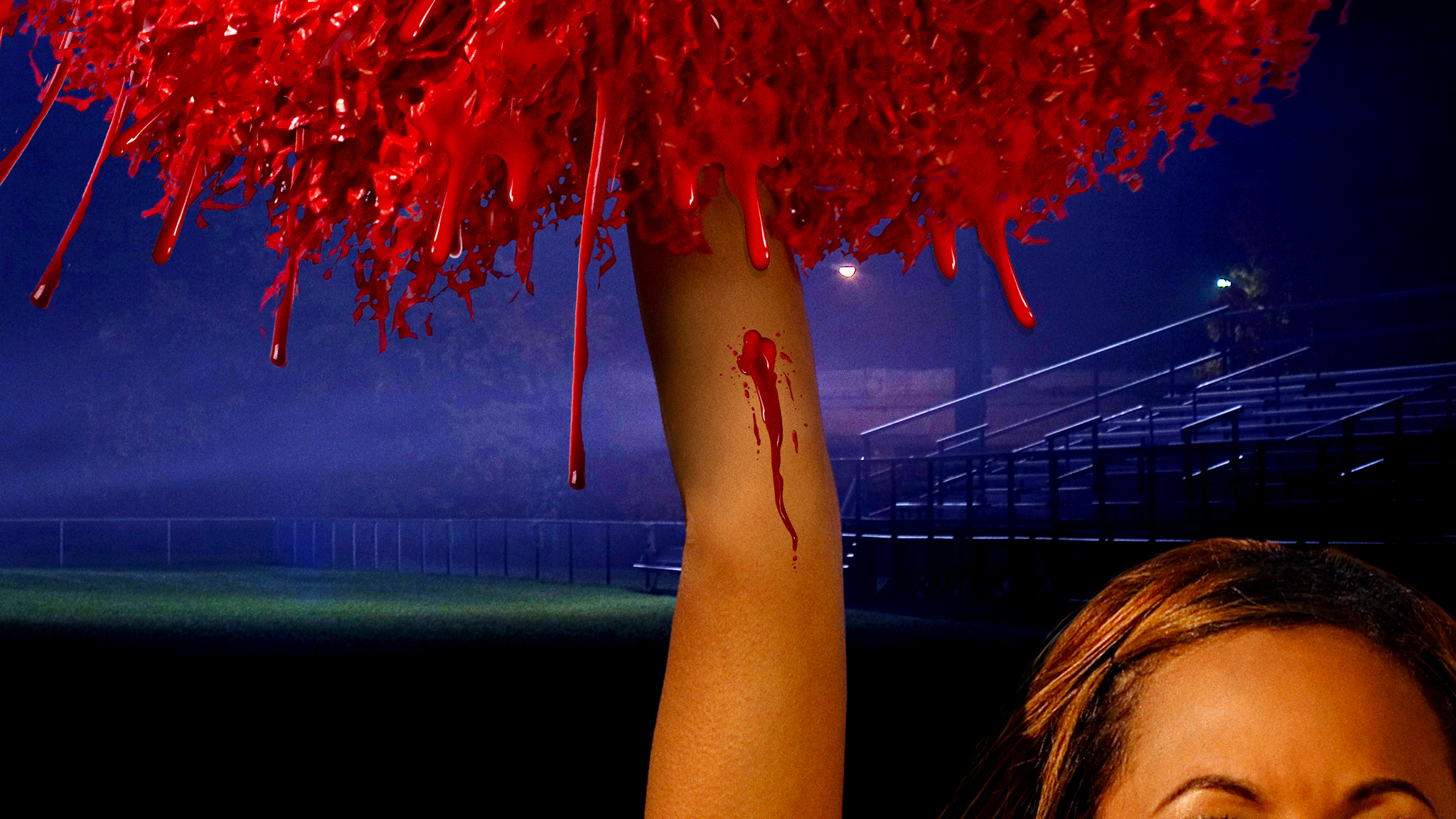 After losing her unstable mother, Darcy is moving in with her aunt Cassie.  Darcy is not comfortable with a stable household, but she is trying her best.  On her first day, Darcy meets Warren and watches the cheerleaders, called the Amazons, practice.  As she and Warren talk, they hear a scream.  Amazon Tracy fell and broke her leg, although she claims Amazon Taylor tripped her on purpose.  With an open spot, Coach Janice calls an emergency tryout.  Summoning all of her courage, Darcy decides to give it a try.  On her way, she bumps into Brandon, Taylor’s boyfriend.  While everything is innocent, Taylor, looking from afar, doesn’t see it that way.  Taylor vows to punish Darcy for trying to take her boyfriend.  After tryouts, Janice tells the Amazons Darcy is the obvious choice.  In private, Taylor threatens to reveal that Janice is sleeping with the married principal if she picks Darcy.  So the coach pick someone else instead.  Darcy walks over to the Amazons for constructive criticism but Taylor tells her off and pushes her.  In a split second, the girls are fighting.  Brandon overhears the argument and breaks up with Taylor.  Taylor vows to make Darcy’s life a living hell.  Amazons Madison and April try to tell Darcy to apologize and become friends with Taylor, but Darcy refuses.  The next day, sad news flows around the school.  Madison is dead and Taylor believes Darcy did it.  With more accidents and deaths, Darcy becomes public enemy number one.

A fun movie that puts little clues all around to help you figure out the killer.  And avid Lifetimer will spot the clues immediately.  For others, it make take some time.  But you won’t get that information here.  Giving the watcher a workable mystery and a far-fetched plot makes the movie fun to watch.  This movie does right some of lifetimes common wrongs like students ruling the teachers, bad girls given free reign, and the new girl being passive.  The writers kick these common plot points to the side and get at the heart of the matter, the mystery.  If you need a few hours to kill, this is the movie to watch.

I don’t know what better is – Darcy

You’re perfect. Just the way you are – Cassie

You will never be an Amazon – Taylor 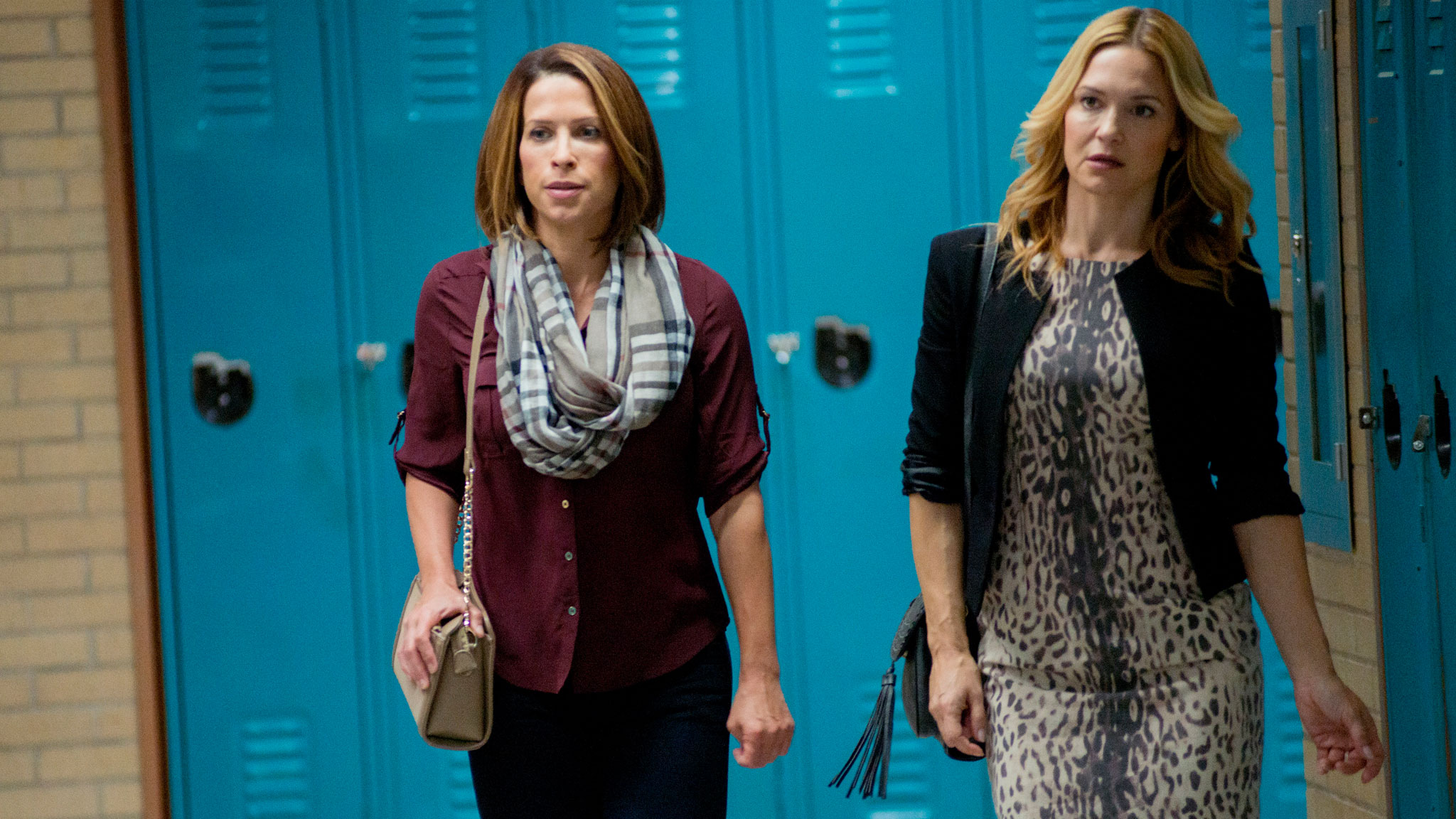 Lisa, much to her daughter’s embarrassment, is the fun mom.  She treats her daughter, Amber, more like her friend than her daughter.  Heather, to her daughter’s chagrin, is a drill sergeant.  She monitors her daughter, Kelly, every day and has strict guidelines to follow.  Best friends since kindergarten, Kelly and Amber start their new school year with heightened anticipation.  They both have boyfriends, Kelly is dating Zander and Amber is dating Alex.  Both wish they can change mom and advocate for each other’s mother.  After school, Amber meets up with Alex, and they go for a date in the park.  Alex gives her a beautiful keychain and says, ‘I love you.’  They start to kiss, but he tries to go too far.  Amber stops him and tells him she wants to go home.  Alex calls her a prude and breaks up with her.  Seeing her daughter is sad about the breakup, Lisa tells Amber to go to a back to school party and have some fun with her friends.  Upon arrival, Amber sees Kelly, and they begin to chat.  Kelly offers to introduce Amber to Zander, and Amber his happy to meet him.  Until she sees his face.  It’s Alex.  Amber tells Kelly immediately, and they both storm off.  They promise not to end their friendship over a guy, and Kelly says she will dump him.  The next day, Kelly blows Amber off, and Amber is unsure why.  But Amber has a sneaking suspicion.  At school, Amber grabs Kelly’s phone and sees she is still texting Zander, and they fight in the school’s courtyard.  Since this is the girls’ first offense, the principal gives them a slap on the wrist.  But the law won’t be so kind after someone finds Zander at the bottom of the stairs with a large gash in his head.  The police interview Amber and Kelly on their whereabouts that night.  After Zander dies and Amber ends up in jail, Lisa will fight to save her daughter, and Heather is by her side.

With a riveting premise, the movie never makes the watcher feel a sense of urgency or panic.  Also, the trailers ruined the twist ending, but the ‘why’ is a mystery.  While the actresses did great, the script was slow, and the victim was repugnant.  You didn’t care that he was injured, and you will care less when he dies.  This movie is background noise for your daily work.

Do you really want to know what I think – Amber

A client or a client with benefits – Heather

If your pissed off at your kid, you point it at her.  Not at Amber.  Not at me – Lisa 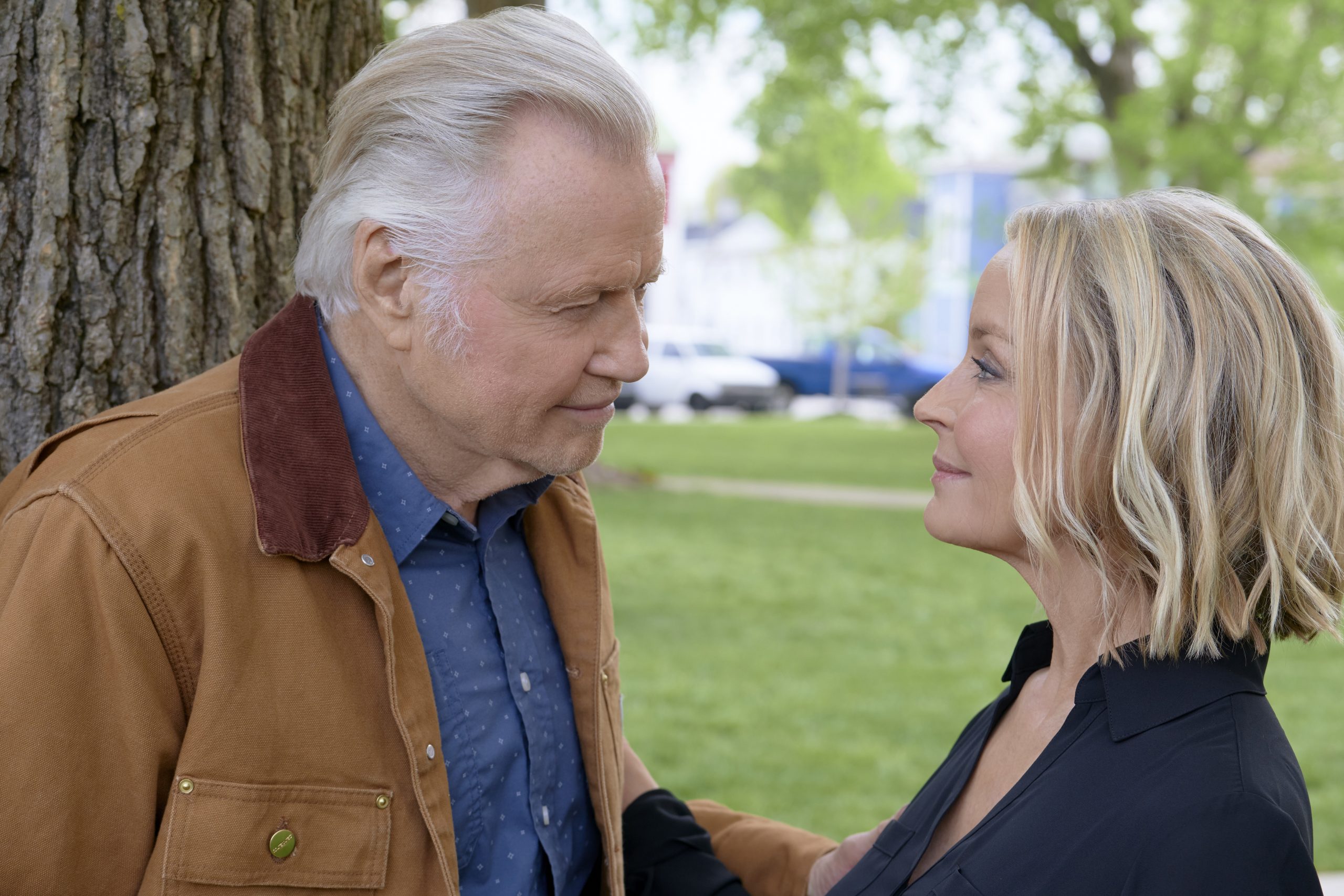 JL Family Ranch is bustling with three generations.  Patriarch and widower, John, loves the ranch, its tranquility, and all its wonders, but he loves his three adult children, Reagan, Becca, and Brady more.  With sad anticipation, John steadies himself for the incoming changes.  Reagan is turning the family ranch into a Bed and Breakfast.  She wants to give city folks a look at beautiful country living. Reagan has three sons, all who love their grandpa.  With the Bed and Breakfast, she can generate more money for the ranch.  To generate buzz about the Bed and Breakfast, Reagan invited reviewers to come and stay.  And to her surprise, Claudia and Frederick, came a day early.  Becca is a single mother of one and dating Sheriff Henry.  Henry loves Becca and her daughter, Lynnie, with all of his heart and plans on proving it soon.  While she is happy for her mother, Lynnie wants to find her father, Caleb.  Caleb left town before she was born, which caused a rift between Caleb’s family and Becca’s family.  Lynnie hired a private investigator after her paternal grandfather, Tab,  didn’t have any answers about Caleb’s whereabouts.  Lynnie knows John and Becca don’t want to discuss Caleb, but she is determined to find her dad.  Brady is the family peacemaker and sounding board. He settles disputes between Lynnie and Becca, John and Reagan, and Becca and Henry.  With two failed proposals, one lost ring, and an unwelcome blast from the past, this family will have to put everything behind them to save a ranch, but not theirs.

The second installment of JL Family Ranch packs the heart and drama expected from the HMM channel (FTC Affiliate Disclaimer).  The first proposal will make you cry tears of laughter as Tad, Brady, and John grab their guns and prepare for battle.  The second proposal will have your jaw on the floor as an unexpected guest arrives.  When Henry calls off the wedding, the drama amplifies.  Of course, this is Hallmark, so you know the plot will settle the tension in two hours, but the movie is engaging enough to keep you guessing.  When the movie ends, you will be ready for the third installment.

There’s something you need to know about your grandfather, I’m a ninja – John

He’s got a gun – Frederick

Code 7 is our lunch break – Henry

Well, this was memorable – Becca

What is it? We don’t want to go against the country way – Claudia 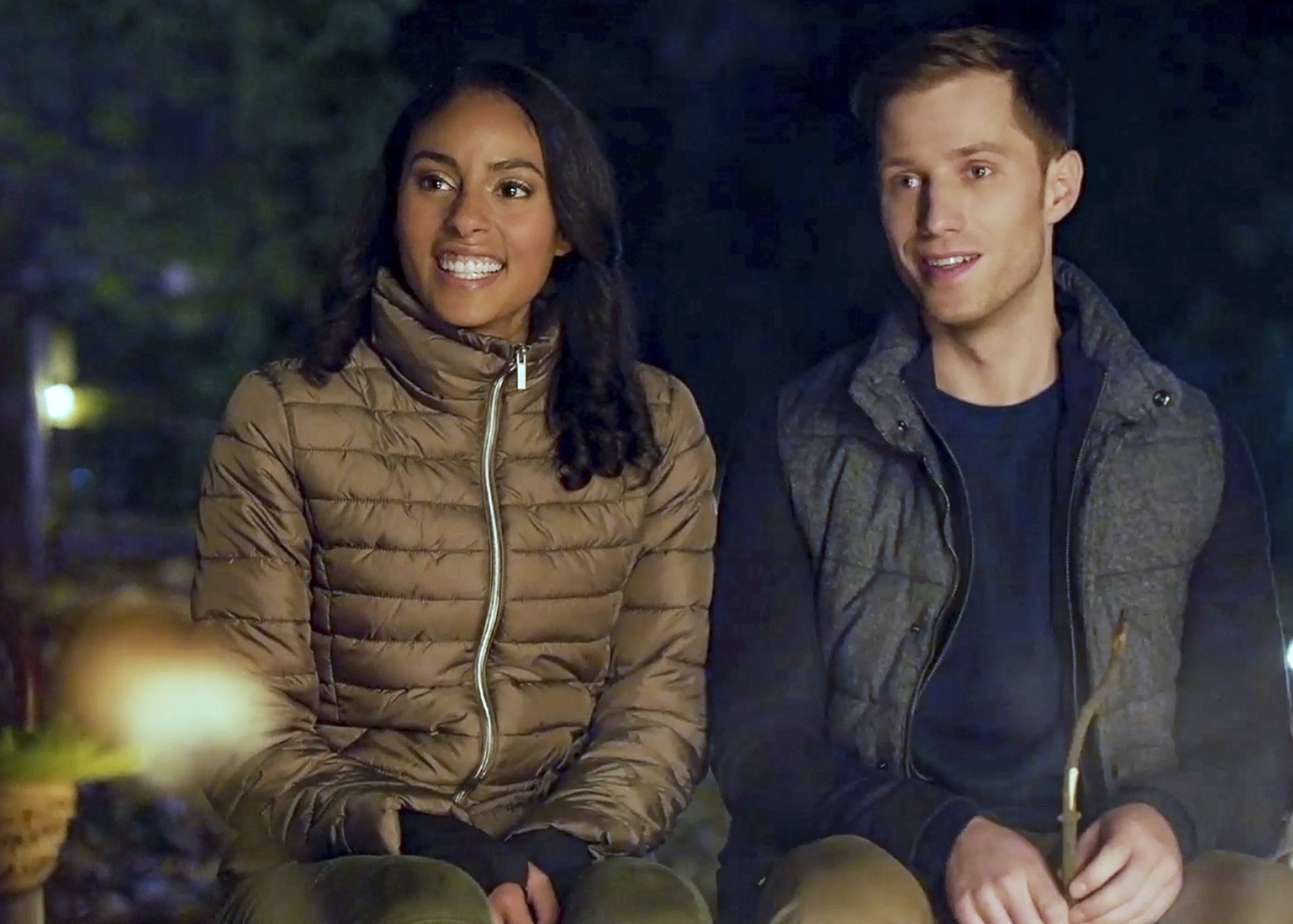 Lily takes a bike ride around Look Lodge.  She bikes up the driveway, and Noah opens his car door without looking.  Lily swerves to avoid hitting the door and hits the ground instead.  She starts to chastise him but stops after realizing he is a guest.  She does an about-face and apologizes.  Inside, Kate gives Lily good news.  The activities director quit with very little notice, and he didn’t leave the activities for the wedding party.  Lily wants to prove she is ready for the job, so she asks her sister, Charmaine, who is also the owner, to plan the wedding party’s activities for the week.  Charmaine agrees to give her the job if the wedding party gives good feedback.  Lily meets with the bride and groom, Justine and Greg, his parents, Alice and Russell, and Greg’s daughter, Beatrice.  Lily tries to coax the plans out of Justine, but Justine left the planning up to the former director and her brother, Noah.  Justine turns to Noah to get the information, but she gets a blank stare.  Her heart sinks as she realizes his assistant did it all.  Lily jumps to his rescue.  She offers to work with Noah to plan everything and get him away from his computer.  As they work together, Lily sees Noah is distant from Justine and Greg’s family.  She wants to bring them all together.  But Noah can see Lily isn’t fulfilling her true passion, owning an adventure tour company.  They both set a plan in motion to save each other.

This movie feels obvious but goes in an entirely different direction.  It focuses more on Noah rebuilding his relationship with Justine while creating new bonds with Greg’s family.  You will instantly fall in love with Beatrice and Alice.  The two smartest people in the movie.  Since the love between the two main characters is in the background, it allows the viewer to digest it easily.  With its fair share of laughs, awkward moments, and fun, you will enjoy it with ease.  And let’s not forget Kate finding love too.  Sit back and get comfortable, because you will love this movie.

I got the door prize in the parking lot – Lily

But that’s what I’m good at – Kate

Alice, where did that come from – Russell

I still got a few tricks up my sleeve – Alice

This tin man has a heart – Noah