Jack, a former teacher, stocks shelves part-time and takes any gig he can book.  Ellie, his friend/manager, has some good news and some bad news.  Good news: She got him a spot at a huge festival.  Bad news: He’s performing in a small local tent.  Jack performs with the best intentions but very few people come to hear him sing.  He decides to give up music and rides home.  Then, for 12 minutes, the world goes dark causing Jack to be hit by a bus.  His beard was shaven to apply stitches, two of his teeth were knocked out, and his guitar is broken.  Ellie is by his side when he wakes up and takes him home.  His friends have a party for him and Ellie gifts him a guitar.  He is overwhelmed by her generosity and starts to play Yesterday.  His friends are blown away by the song.  Not because of his singing, but because they never heard it before.  To make matters worse, they never heard of The Beatles (FTC Affiliate Disclaimer).  Jack starts to write every Beatles song he knows and pawns them off as his own.  He is discovered by a producer and creates an EP.  He passes the EP around his store and gets attention from a local TV station.  When he sings at the station, he becomes a viral sensation and catches the eye of Ed Sheeran and his manager, Debra (FTC Affiliate Disclaimer).  Together, they plan to make Jack the top-selling artist in the world.  Can Jack keep the lie going when he learns the truth about Ellie, potentially losing her forever?

This movie’s slow plot is saved by 3 things: the music, Debra, and a special appearance.  Without this, Yesterday is a boring romantic comedy with little to no meaning.  As the story develops, Jack learns that other items have been forgotten like Coca Cola.  Debra is hilarious because she says exactly what she means when she wants.  It’s bold and refreshing.  If you are a fan of the music, see the matinee.

Yeah, I got some of the words right – Jack

I have a question. Is that the best you can look? – Debra 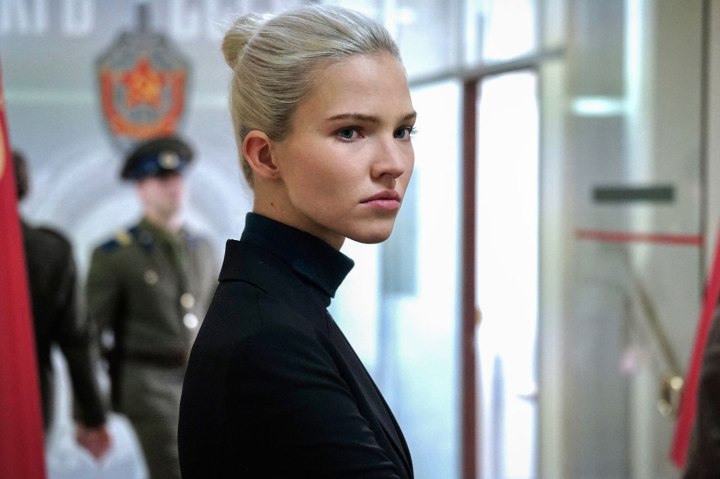 Anna sits in a market selling Russian Nesting Dolls when a man approaches her about becoming a model (FTC Affiliate Disclaimer).  Anna is a biology student and has a steady life.  But he offers her a home and money.  So she takes the offer.  She moves into a house with 5 women and becomes a hot commodity in the modeling world.  She catches the attention of a French import/export millionaire.  After months of dating, he wants more.  But she doesn’t trust him because he is elusive about his business.  He finally confesses he sells weapons to violent militant groups in war-torn countries with documented human rights violations.  Anna is relieved he confessed and excused herself to the bathroom.  When she comes out, she shoots him in the head.  Later, Anna is arrested by CIA Special Agent Leonard.  He interviews her and lets her go.  But he keeps watch of her.  With his surveillance, he finds the deadly truth with the help of one object: her purse.

Anna tries to fight like John Wick but the combat is flawed.  Anna tries to have the sex appeal of Atomic Blonde and gets close with very passionate sex scenes.  Anna tries to have the Tarantino Effect, but each timeline isn’t distinct enough to be effective.  And the twist ending is extremely predictable.  This movie just falls flat and isn’t original.  It should have been on the SyFy channel, not a theater.  So, wait until it’s on TV.

You are a blank key, which means you have the potential to open many doors – Alex

Sorry for disturbing your day – Leonard

I need his finger – Anna