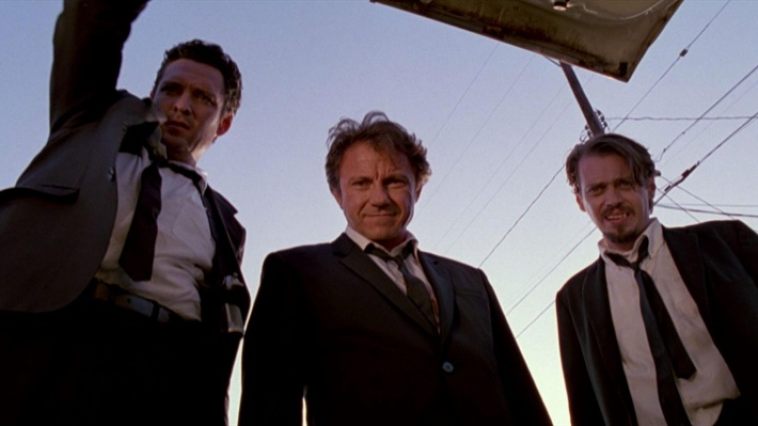 Eight men sit at a table discussing the latest Madonna song, movies, and tipping.  Six of the men are well dress, while the other 2 are relaxed.  The men leave the restaurant not knowing that most of them would be dead within hours.  The next time you see 2 of the men, Mr. Orange is bleeding from a gun shot wound to the stomach and he is begging Mr. White to take him to the hospital.  Mr. White knows that hospitals have to report gun shot wounds to the police.  Since the group just robbed a bank, they don’t want police.  Mr. White takes Mr. Orange to the warehouse the 8 men agreed to go to after the robbery so they can wait for Joe to help.  Soon, they are joined by Mr. Pink.  Mr. Pink tells them Mr. Brown was killed by the cops but he has two major problems with the robbery.  First, the police responded to the alarm too fast, so he believes they have a rat in the group.  Second, Mr. Blonde went insane during the robbery and unnecessarily killed people.  Mr. Pink is determined to weed out the rat and avoid Mr. Blonde.  And in walks Mr. Blonde with a surprise in his trunk for the other 3 men.  A police officer.  Mr. Blonde wants all the information the officer has and will do anything to get it.  Soon Joe, the organizer, and his son Eddie join the men and report that Mr. Blue is dead.  Mr. Pink is the only one who got away with any diamonds.  So Mr. Pink leads Joe, Eddie, and Mr. White to the diamonds.  While Mr. Blonde is left with a bleeding and unconscious Mr. Orange and a captive cop.  When the four come back with the diamonds, 2 men are dead and one has to start explaining.

This Quentin Tarantino cult classic is told in is classic nonlinear, bloody style.  As each man is introduced to the warehouse scene, you learn about his part in the robbery and how he became a part of the team.  The rat’s identity is not the mystery.  You will learn that half way through the movie, but it’s who will survive that matters.  With dialogs happening down a hallway, you feel as if you are eavesdropping on their conversation.  This is not a gangster movie but a dark comedy.  It can be considered inspiration for Baby Driver and Pulp Fiction (FTC Affiliate Disclaimer).  The movie falls short due to some boring dialog (until they add guns and/or blood) and missing character arcs. However, this movie does have a great soundtrack and disk jockey.  But it leaves one question for you to answer, is he dead or alive?

If you shoot me in a dream, you better wake up and apologize – Mr. White

You know with this is. It’s the world’s smallest violin playing just for the waitress – Mr. Pink

You gonna bark little doggy or are you gonna bite – Mr. Blonde