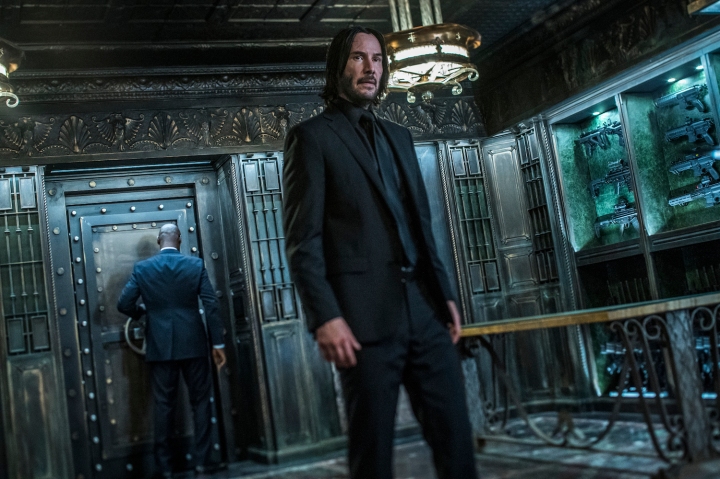 John was given 1 hour to get his affairs in order before he is excommunicated and the $14-million bounty is activated. Winston, the manager of the Continental, counts down the moments until John is a man on the run. However, some don’t want to wait and go after John immediately. John runs to the New York Library to get a ticket, a marker, and some gold coins. He sends his dog to Charon (the Continental concierge) and heads to the doctor for stitches. Halfway through the medical procedure, John’s time is up and the doctor can no longer work on him. The doctor knows that helping John would lead to his death, so John has to finish his stitches. John takes his ticket and heads home to the Director. The wants passage to Casablanca, Morocco. He knows someone there who could lead him to the Elder of High Table. He wants to explain his actions and convince them to let him live. Meanwhile, an Adjudicator for the High Table has come to New York to find and punish everyone who helped John before or after he was excommunicated. Vengeance will cut deep.

So let’s be honest, John Wick 3 has about 30 to 45 minutes of dialogue and the rest is all action. And, it’s worth it. Like John Wick and John Wick: Chapter 2, every spoken word is done with necessity. The action sequences are masterfully coordinated and ups the stakes with more weapons, strong and unique fighting styles, and captivating scenery. The audience is given more of John’s background and training. While his underlying assassin history is given, the script only alludes to the history between John and Sophia. The audience should be given more about the relationship and blood oath between them. However, this small plot hole can be filled in John Wick 4. Yes, there will be a 4. John’s has two scores to settle and one person by his side.

I get it – John Wick

The Sun is Also a Star – Review

Please Note: This is a review of the movie only. Not a comparison of the book to the movie

Natasha moved to New York, from Jamaica, with her family when she was 9 years old. She plans to become a data analyst but loves the stars. She bases her life on the scientific method. Everything must be tested, proven, and quantified for her to believe it. She has been in the US for 11 years and calls New York home. One day, ICE raided her father’s job and he was discovered as an undocumented immigrant. Her family pleaded their case but they were denied and have to leave tomorrow. Natasha has an appointment today at 8 a.m. with an immigration officer. She hopes the officer can look over her family’s case and let them stay. Daniel is a first generation American from a proud Korean family. When he was a baby, his parents place several items in front of him. He grabbed the stethoscope. From that point forward, his parents told him he would become a doctor. While his older brother Charlie continues to disappoint his parents, Daniel will do anything to please them. Today, Daniel has an interview for a Dartmouth College recommendation. This recommendation will guarantee his acceptance into college and cement his future. Nevertheless, Daniel would rather write poetry. Both on their way to their appointments, Daniel looks down at the crowd and notices Natasha is the only one looking up. She can’t see him but he can see her. She turns to leave and he notices the back of her jacket says ‘Deus ex Machina’. He read a poem with those words that morning. He believes its destiny and runs after her. As Daniel briskly walks after her, he witnesses a car sideswipe a shopper and a bicyclist. Now, the motorist is headed to Natasha intersection. She has the right of way, but he won’t stop. Daniel grabs her and pulls her to the ground. She is grateful Daniel saved her life and the two talk. Once calm, Natasha notices his notebook and playfully teases him about his poems. She tells him she doesn’t believe in love because it can’t be scientifically proven. Daniel finds a study online and challenges her to an experiment. He has 1 day to use the study to make her fall in love. She looks at her watch and sees she has to make her 8 am appointment and gives one hour. Their meeting becomes destiny for themselves and many lives around them.

Based on the novel by Nicola Yoon, Daniel and Natasha have great chemistry on screen and will make you instantly applaud their relationship (FTC Affiliate Disclaimer). They find the comedy in the tragedy around them. They are both living a lie. Natasha practically chooses to be a data analyst when Daniel tell her she should study Astronomy. Daniel feels obligated to be a doctor when Natasha tells him to write. This movie goes beyond the cheesy teen flicks by dealing in real life issues like illegal immigration, family conditioning, and Korean history in black hair care. You will feel their desperation as Natasha’s clock winds down. With all the meetings of fate, this movie still ends realistically while inspiring hope in love and destiny.

It exists whether you believe it or not – Daniel

Too bad you couldn’t prove your hypothesis – Natasha

Please Note: This is a review of the movie only. Not a comparison of the book to the movie 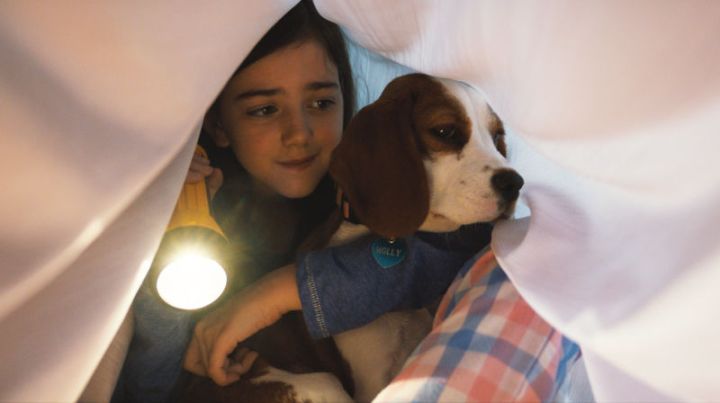 Ethan and Hannah still live on the farm with their dog Bailey along with 2 new additions to their family. Gloria, their daughter-in-law, and their granddaughter Clarity June also know as CJ. Gloria and CJ moved in with them after their son Henry died when Gloria was 8 months pregnant. They continuously bump heads with Gloria over CJ. Gloria wants to sing but can’t find any gig that will accept her daughter. Ethan and Hannah offer to take care of CJ but Gloria fears they are trying to take her away for her inheritance. No matter how hard they plead, Gloria takes CJ away and never looks back. Ethan and Hannah are grief-stricken and find comfort in each other and Bailey. Sadly, Ethan feels a lump on Bailey’s stomach and the vet says he needs to be put down. As Ethan says his goodbyes, he tells Bailey to look after CJ in his next life. Bailey is reincarnated as Molly. Yes, he is now a girl. His owner is giving up Molly and her siblings up for adoption. Molly sees her brother Rocky being adopted by Trent and smells a familiar scent. Then, Molly remembers the scent and her purpose. The scent is CJ and Ethan wanted Molly to protect her. So, Molly jumps into CJ’s arms and CJ is in love. She convinces the owner, with the help of her best friend Trent, that her mother will love a dog and will let her keep it. In reality, Gloria hates dogs, has a drinking problem, a string of bad boyfriends, and neglects CJ. CJ sneaks Molly into the hope and pretends to be her mother when she closes the deal with Molly’s owner on the phone. Now, Molly is living her purpose and will be by CJ’s side in this lifetime and many others.

The sequel to A Dog’s Purpose and based on the novel by W. Bruce Cameron, this movie will bring tears to your eyes as it closes out the final chapter (FTC Affiliate Disclaimer). You will find easy laughs in Bailey, Molly, and other dog’s commentary. Also, you will learn the truth about dog shelters’ sad truth. In one life, Max (formerly Bailey) is waiting to be adopted at an animal shelter’s Adoptapalooza. He finds CJ and she brings him back to the event. The shelter owner tells CJ its Max’s last day. If Max is not adopted, Max will be put down. Shelters are like rivers, it constantly flows. They try to send the dogs to the no-kill shelters but they are full. They have to make room for more dogs. So many dogs and so few shelters. No matter if you believe in reincarnation, you will believe in this dog’s love, life, purpose, and journey. See it with the family today.

You don’t seem to understand. She’s my baby, not yours – Gloria

Let me show you – Ethan

Why are they walking so slow – Molly

Can I have my treat now – Max

He lived in a house made of snacks – Big Dog

I feel like I’m getting you in trouble – CJ

Is that a half a cup American or Empirical? – Trent