To Have and To Hold – Review

To Have and To Hold – Lifetime – 2 hours and 5 minutes 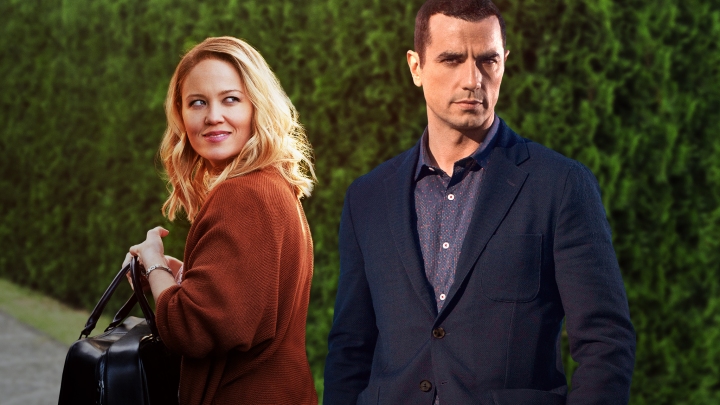 As children, Emily and Alice worked on their vision boards.  Emily wanted to travel the world and become a world respected photographer. Alice wanted to become a chef, live in a country cottage with a husband and kids.  Now, they live together in Seattle and work for a catering company.  Alice sees this as a step up after graduating from culinary school, Emily feels trapped.  Even with her degree, Alice’s boss won’t give her a chance to cook.  Luckily, they always have Harry.  Harry is a friend to both women and a successful carpenter.  Before Harry leaves town for business, he writes a note and puts it on Alice’s hip.  After he leaves, she turns over and the note falls into the couch.  Later, Alice and Emily waitress at a party in a huge home.  Alice can’t believe her high school crush is there.  Joe Evans is a highly successful and wealthy hedge fund manager.  Joe takes Alice’s business card and calls her to cook for a small dinner party at his home.  A few days later, Joe’s party is successful thanks to Alice.  The two start to kiss and Alice stays the night.  The next morning, while Joe is asleep, Alice slips away and runs home.  Once home, Alice tells Emily everything.  Midway through the detailed play-by-play, Alice is bombarded by long-stemmed roses from Joe.  In the coming months, Alice has made Joe her #1 priority.  She isn’t answering calls from Harry, Emily, or her boss.  She loses a job promotion but Joe doesn’t care.  Just as Harry arrives back in town, Joe pops the question.  They have a whirlwind marriage, honeymoon, and settling period.  On their one year anniversary, Alice can hear her biological clock ticking and wants to start a family.  However, Joe is never home or doesn’t want to get intimate.  In addition, whenever she mentions working outside the home, Joe tells her she needs to focus on him and their future children.  After being caught in a workplace scandal, Joe is transferred to the New York office.  Alice hopes it will be a fresh start for their marriage but their troubles just follow them.  She feels lost, trapped, and confused.  But when she feels betrayed again, her entire world will fall apart.

Based on To Have and To Hold by Jane Green, this movie focuses the 1st half on the past and the 2nd half on the present (FTC Affiliate Disclaimer).  The first time Alice is hurt, you want her to leave Joe so badly.  But she gives the “I want a baby” excuse as her reason to stay.  Her dream of having a family is much larger than her self worth.  So she stays and hopes moving will fix the relationship.  While there is a strong story, the topic of emotional abuse or neglect is never mentioned.  Alice is a victim and Joe is a classic abuser.  Hopefully, viewers can see the cycle of abuse in their marriage.  In reality, this is a Hallmark movie with sex and abuse.  And, not every character’s life ends happily.  You want to see Alice rebuild her life, it just takes a frustratingly long time.  But stick in there for a happy ending.

Maybe you should find something just for you. You’ll never be happy just as Mr. Joe Evans – Emily

Whatever I want? – Harry

She would always make something beautiful out of nothing. You definitely have that gift – Joe 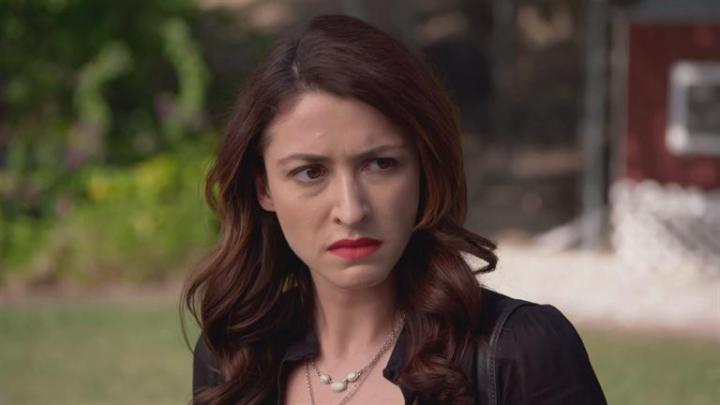 Officer Penny has transferred to a new station.  While she is new to this station, she is a veteran of the town.  During a home invasion, Penny shoots the robber but doesn’t call an ambulance immediately.  Her partner Kutler is dismayed by her inaction and tends to he robber while she checks on the victim.  As she goes upstairs, she notices the pictures on the wall.  In a split section, Penny recognized the woman in the photos.  It’s Tara.  In school, Tara and Penny were friends until Tara was accepted into the ‘Cool Kids’ group.  The Cool Kids tormented and abused Penny every day while Tara watched.  Before Penny could perform at the talent show, Tara made amends and offer to do her makeup.  Penny agreed but the two were interrupted and the Cool Kids strap Penny to a chair, put clown makeup on her, and push her on to the stage so the school could laugh at her.  Penny can’t believe she is standing in Tara’s home.  When the shock of the robbery wears off, Tara recognized Penny.  She is proud of what Penny has done with her life and grateful that Penny saved her.  The next day, Tara wants to meet with Penny to explain her past actions.  She even gets an idea to have a small reunion BBQ and invite Penny.   Penny is worried but later accepts.  However, she will only come if Nolan (Tara’s high school boyfriend and Penny’s biggest tormentor) doesn’t come.  Tara agrees but Nolan learns about the reunion on social media.  When Nolan finally identifies Penny, he starts making fun of her.  Penny feels like a teen victim and runs away.  Penny is convinced Tara invited Nolan on purpose.  Penny vows to make them pay.

Revenge is a dish best served cold and Penny’s heart has been dipped into liquid nitrogen.  You feel little to no remorse as Penny unleashes his evil on those who wronged her.  You will cheer her own as she used her computer and police skills to tear Tara’s life apart.  Penny starts with a whisper and ends with a gunshot.  The movie is well acted and engaging.  In turn, you never feel bad for Tara.  And that’s the lost message.  The bullied should never resort to becoming a bully.

Remind me to never piss you off – Tara 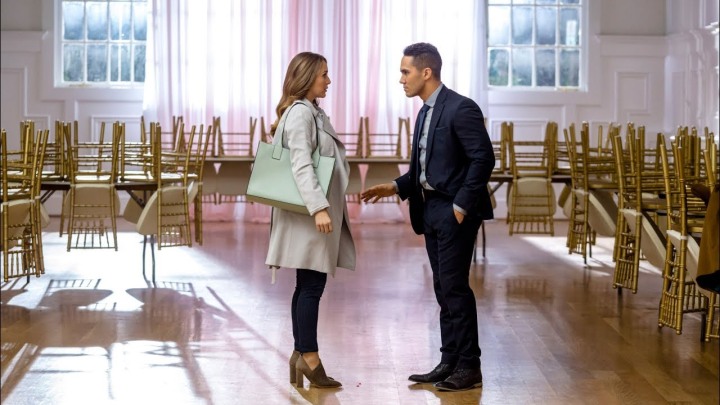 Allie coaches her assistant Noah while taking pictures before Jenna and Kevin’s wedding.  Allie gets dirty looks from several of Jenna’s family members.  At the rehearsal dinner the night before, Greg (Allie’s brother) approached Jenna.  He admitted he was still in love with her and wanted her to leave with him.  Shocked by his omission, Jenna decided to stay and get married to Kevin.  Now, Jenna is flustered and can’t focus on the upcoming wedding.  Allie gives her support along with something blue and borrowed.  During the newlyweds’ first dance, Kevin dips Jenna and has the wind knocked out of him.  When Kevin straightens up, he is bleeding.  He was shot and soon died.  Stunned, Allie sits with her camera and goes through the pictures when Det. Sam Acosta asks her for a statement.  She tells him everything she knows and agrees to give him the pictures after she gets back to her studio.  Just as Sam turns to interview another guest, Kevin’s sister, Sarah, tells Sam that Greg is the murderer.  Allie tells Sam her brother was nowhere near the wedding.  But an eyewitness says she saw a man that fit his description running away after the gunshot.  Sam is using his New York instinct to pick apart the witness statements will adapting to his new small-town life.  Allie tries to stay on the sidelines until her brother is arrested with the murder weapon in his home.  Now, she will stop at nothing to prove her brother’s innocence. One picture at a time.

This mystery sets itself apart from the start.  The plot gives the viewer several suspects who each have a unique motive.  Each picture hides a clue to the truth.  There is a moment you start to wonder if Greg killed Kevin.  Everything just lines up too nicely. Don’t worry, Allie is not alone.  She has her assistant Noah, who is studying forensics and criminology.  In addition, she has her friend Beth, an actress who is ready to play any role.  Since this is the first movie in the series, you are getting to know Allie and Sam.  You will see sparks but they stay professional.  When each talks about their past, you will get a hint of episodes to come.  Unfortunately, you will have to wait until next year for this Picture Perfect series to add more mysteries to the HMM line up.

He told me not to leave town – Greg

I needed a change and New York had too many memories – Det. Sam

What are you going to do? Stake the place out – Noah 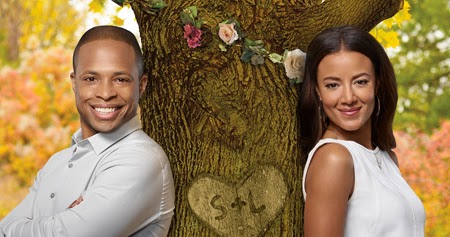 Lily produces Wedding Countdown.  It’s a reality contest show where 3 engaged couples compete for $50,000.  While she is getting noticed, she doesn’t have a production deal for her show.  After wrapping up another episode, Nicole – the network head – calls Lily for discussion dinner.  Lily hopes it’s good news but is disappointed when Nicole cancels at the last minute.  Nicole hopes to meet with Lily after her next episode is done.  Lily is excited because the next episode will be shot at her hometown.  Before she leaves, Lily’s production assistant Tandy informs her that one couple got cold feet and canceled.  She found a replacement and ask Lily to approve.  Lily approves without looking at their picture.  Scott runs an antique store and is engaged to Brynn.  She owns a lifestyle brand website and wants to drive more traffic to it.  She decides to enter them into a reality show to gain more followers.  She is excited when they are picked for the emergency casting.  Scott has his reservations about being on TV but he wants Brynn and her site to succeed.  He yields to her request and heads to the set.  The moment Lily sees Scott’s dog, she registers Scott is the 3rd couple for the show.  And he is her ex-boyfriend.  Lily broke up with Scott to pursue her dream of writing for a TV show in L.A.  But when her dream fizzled out, she stayed in L.A. to do reality TV and never went back home.  Lily promised Nicole to keep the drama on screen.  Can Lily do that when she walked back into her true love’s life … with his fiancé in the dark about what she looks like? If she doesn’t keep her cool, she will lose her potential production deal.

Each character slowly discovers who they are and what they want from life and love.  While the love story is the driving point of the movie, you slowly forget the plot as Lily discovers her writing roots.  She learns that just because you are successful at something, it doesn’t mean it’s your true calling.  You are drawn as you watch her find her footing in life.  While Brynn is a rival, she is not an enemy.  Brynn just sees life through the filter of her followers and a successful business.  It doesn’t make her a bad person, just not a match for Scott.  Scott learns to asks for what he wants.   He spends so much time trying to avoid an argument, he slowly becomes unhappy.   This movie packs so many life lessons in 2 hours, you will be entranced.

You know how I feel about shows like this. It’s the downfall to civilization – Scott

I don’t believe in fate, the past is the past – Lily

Do you need a chaperone – Tandy