Bridget, Vicky, Monica, and Eliza decide to take a girls trip and rent a home owned by James.  The girls say they all need the trip but Eliza needs it more.  She wants to get the memory of an abusive ex-boyfriend, Steve, out of her head.   Once at the house, Bridget quickly flirts with James.  An heiress, she is comfortable in her own skin and will change plans quickly for a hot guy.  Vicky is a married, mom who takes care of everyone around her.  Monica is a fearless world traveler with a few destinations in mind.  James shows the girls around the modern home and its remote control.  They have Wi-Fi but a spotty cell phone connection.  The girls settle in and Eliza gets the bedroom on the top floor.  She starts to unpack when she finds a necklace under the dresser.  She packs it away and gets trapped in the bedroom.  She screams for help and gets saved by one of her friends.  They put her mind at ease that this was an accident.  Later, Vicky and Eliza see a girl putting up missing flyers of Jennifer Baxter.  She went missing while on vacation, a few weeks ago.  Eliza takes a few of the flyers and compares Jennifer’s necklace to the one she found.  They match.  She, in front of her friends, ask James about Jennifer.  He denies knowing her until Eliza acknowledges the necklace she found.  James states Jennifer stayed with him for a day after leaving his neighbor, Hector’s rental home after a bad experience.   He believes Hector hurt not only Jennifer but more missing girls.  While her friends believe him, Eliza is not convinced.  She knows something is wrong.  But she has no idea how wrong it is.

This movie is Lifetime cops, at their best, as per freaking usual.  Be ready to slap a cop in the face when you hear it only took a few words and baked goods to get the cops on James’s side.  Also, her friends are so stuck on having a good time, they never heed Eliza’s warnings about James.  Even when she tries to make a last ditch effort to leave, they convince her to stay one more day.  Eliza is a good (and stupid) friend.  Most would have left the other three girls behind.  You know James is a bad guy, but he is only a puppet on someone else’s strings.

I have the worst instincts when it comes to men – Eliza

All we can do is be there for her. There is no magic fix for a broken heart – Monica

Listen to me – Hector

A decade ago, Maggie was an EMT that responded to a call.  When she and her partner arrive, they quickly assess a robber is holding 2 people hostage and a police officer is shot outside.  Maggie remembers her combat training and stealthfully enters the convenience store.  She sees a man, with a gunshot, bleeding on the floor and a woman in labor with a broken leg.  She attends to the man but is interrupted when the robber comes back.  Maggie offers to give him money and an escape.  The robber takes her money and tells her she can save one person.  She sees that the man is bleeding out and goes to him.  But the man stops her dead in her tracks when the screams “Save Her”.  Maggie runs to the pregnant woman and helps her out.  The robber shoots a few more shots and is taken down by the police.  Maggie runs in to help the man but he dies her arms.  Today, Maggie is ready to get back to work, has a bratty teen daughter and devoted, hard-working husband, and was diagnosed with PTSD.  After taking an exam to get recertified for EMT work, Maggie comes home to find her husband shot in the stomach and her daughter missing.  Then, she gets a phone call.  If she calls the police, her daughter is dead.  She has to help her husband and save her daughter without getting herself killed.

This movie doesn’t “go from 0 to 100”.  It starts at 100 and stays there.  When you learn the mastermind, you won’t be shocked by who they are.  But you will be shocked by what the person is capable of doing to Maggie and her family.   It will only take a venus fly trap and ashes to help you see the depths of this person’s depravity.  This movie sets itself apart because of the big confrontation with the henchmen.  It doesn’t happen in the last 30 minutes, it happens in the first 40.  This movie throws the Lifetime format out the window while the characters make classic Lifetime mistakes.  One mystery is left open: what became of Alston.

I can’t let them die – Maggie

All I need is 2 minutes – Jason

Shame on you. She’s not worth your family – Alston

Hailey is worried about her friends now that Clayton’s paroled.  Clayton murdered his wife, leaving his sister in law, Amelia, crushed.  Paulina, the DA on his case, has been frazzled at work because she blames herself for his early release.  Years ago, she took a plea deal for a reduced sentence because an eye witness’s testimony was unreliable.  Hailey was her second chair.  To this day, Paulina’s deepest regret is that plea deal.   Now, Clayton has published a book about the crime and Hailey knows it will trigger extreme emotions in a lot of people.  Amelia and Sabrina approach Hailey to ask for a favor.  Amelia went to Clayton’s home to retrieve a family heirloom but Clayton caught her.  He threatened to have her served with a restraining order.  If he does, her teaching career would be over.  Amelia asks Hailey to help her find out if the restraining order exists and if so, to get Clayton to withdraw it.  Once Hailey uncovers the restraining order, she goes to Clayton’s book signing to talk to him but it was canceled.  His friend, Frank, says Clayton canceled it at the last minute with no reason.  Hailey knows Clayton is a narcissist so he wouldn’t cancel his signing.  She and Fincher go to Clayton’s house and find him dead on the floor.  A murdered murder on parole has a lot of suspects.  When Clayton’s wife names Paulina as his murder; Hailey and Fincher are on the case.

In true Hailey Dean form, there are so many suspects with so many different types of motives.  Having an admitted murder as a victim is pure genius.  In order to understand the mark this case has left on Hailey, Paulina, and Fincher, you need to see the previous two episodes (Death on Duty and A Prescription for Murder).  This overarching storyline connects these characters in a deeply sincere way.  While Hailey doesn’t believe Paulina isn’t a murder, she still investigates Paulina and her alibi.  She and Fincher try not to make assumptions.   It’s a great investigation and you will need to take notes.  By the way, after the case is solved, keep watching for a tear-inducing moment all Hailey Dean fans have been waiting for since the beginning of the series.

We’re two sides of the same coin.  She’s a lot more like me than she would like to admit – Clayton

Hailey, I know you’re intentions are good, but I don’t need a therapist – Paulina

Are you here as the district attorney – Hailey

The law was never on his side, was it – Frank 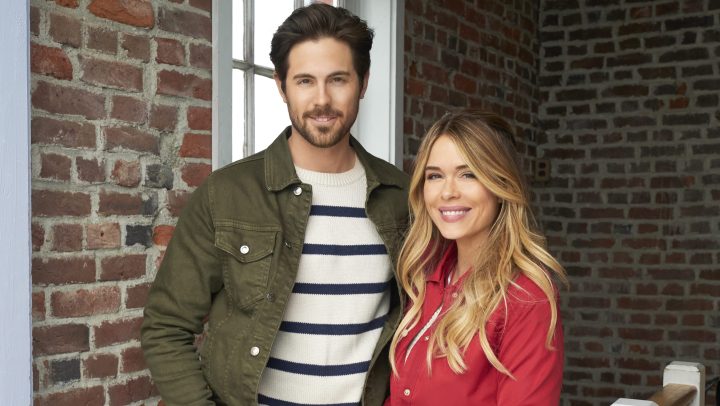 Claire loves her little piece of heaven, Blue Island. She has several childhood memories there. Now, as a biology teacher, she takes her students there to study and enjoy unencumbered wildlife. She needs this place to relax because 3 of her friends are getting married in the same month. To make it harder, her ex-boyfriend Jason will be at each of the weddings. Last year, he got a job in another state and he wanted her to come but she didn’t want to leave her town and island behind. So, they broke up. Now she is focussing on being a teacher and helping her friends with their weddings.  While on a trip to the island with her students, Claire spots surveyors.  She is dumbfounded they are on the island.  When she questions their presence, they explain the town wants to sail the island to a resort.  Claire is heartbroken.  She confides in her new skipper, Tom.  After a rough and bumpy start, the two are getting along very well.  Tom’s advice is to move on.  But when she pleads her case, he tells her to fight for Blue Island.  Tom sails wedding guest to Blue Island and gets an impromptu invite.  Claire is happy to dance with him at the wedding because Jason is there with his new girlfriend Samantha.  The next day, Jason tells Claire he wants a second chance but she feels a connection to Tom.  There are just two problems.  First, Jason works for the resort that wants to buy the island.  Second, Tom wants to hire Jason to sail resort guest from the mainland to the island and back.  Tom is considering the offer.  The two men Claire wants are after the land she needs.

This movie is sweet and funny.  The actor’s performance’s are spot on.  Plus, Claire and Tom have great chemistry.  This should be said: when you first hear about a rare bird being spotted, you instantly believe you now how Claire will save the island, but it’s a misdirect.  Claire finds her strength in defending the island and uses that strength to decide between Tom and Jason.  While you know how the journey will end, it is a good trip for Hallmark fans.

I’m a big girl. I can handle it – Claire

He didn’t say no – Jason