The Secret Life of Pets 2 – Review 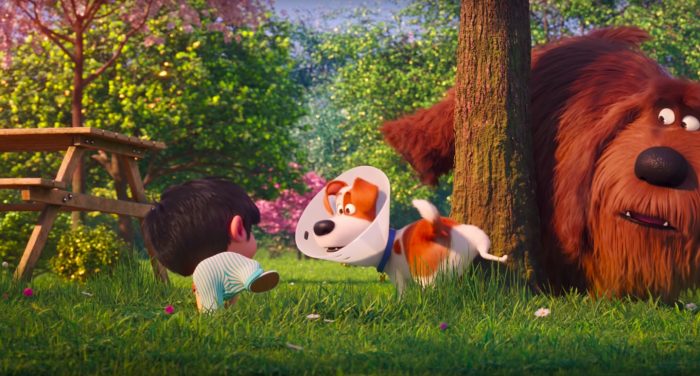 A trip to the park solidifies Max’s feelings about kids, i.e. he doesn’t like or want them.  He is happy with his family of Katie, Duke, and him.  Then, Katie meets Chuck.  He moves in, they get married, and they have a baby named Liam.  When he was an infant, Max is was fine because they had their own spaces.  But when Liam started to crawl and walk, he when after them.  Duke loved it but Max had enough.  Until Liam spoke and said he loved Max.  Max made it his mission to project Liam no matter what happened.  Even Liam believes he is a dog.  Liam buries his toys, eats out of a bowl on the floor, and pees outside.  Snowball warns Max that Liam needs to pee inside before he goes to pre-school.  The thought of Liam in a tough, dangerous world makes Max scratch uncontrollably.  He is scratching so much, Katie takes him to a behavioral specialist who fits him for a cone.  Max says he will never allow Liam to go to preschool and he will watch over him forever.  Later, Max and Duke are ecstatic to go on a trip to a farm in the car.  Before they pack up, Max gives his most beloved ball, Busy Bee, to Gidget.  She promises to protect it like it was their child.  And they leave.  Back at the apartment building, Snowball gets a visit from Daisy.  Daisy saw a tiger, Hu, on a plane that needed to be rescued from the circus.  She heard of a hero named Captain Snowball who had the power to save Hu.  Captain Snowball to the rescue.   Also, Gidget loses Busy Bee in a cat lady’s apartment.  She asks Chloe to teach her how to be a cat to get Busy Bee back.

The sequel to The Secret Life of Pets is so much funnier than the first.  You will laugh until you cry.  While the movie is an hour and a half long, there are 3 equally entertaining plots running simultaneously.  This isn’t a movie where some jokes are adults only or some jokes are kids only; all jokes will be loved by the whole family.  It will be hard to pick a favorite scene when they are all so good.  The animation is spot on and the voice acting is superb.  If that isn’t enough, you are treated to some real-life clips of kids and pets.  In addition, you are given a Snowball rap.  You will wish they played it twice.  This movie is an instant classic.  Be ready for part three and don’t stay after the credits.

He had his place and I had mine – Max

I will defend Busy Bee with my life – Gidget

Our owners were in the overhead bin and we were going through their stuff. They always blame the airline – Daisy

A dog only got 2 things in this life. His water bowl and his dignity. Take away one and you take away both – Rooster

Aladdin has been on his own since he was a small child.  He has stolen and ran to survive.  One day he sees a man yelling at a woman and calling her a thief.  The merchant claims she stole is bread and wants her bracelet as payment.  The young woman refuses to give it up.  Aladdin steps in between them and gives the merchant her bracelet.  However, as Aladdin talks to the merchant, Aladdin picks the bracelet out of his pocket.   Aladdin grabs the young woman’s hand and they walk away.  Soon, the merchant realizes what happened and send the guards after them.  They run through the streets, away from the guards, and into Aladdin’s home.  Aladdin knows the young woman is from the palace because she wears fine clothes.  He assumes she is the princess’s handmaid.  The young woman agrees and states her name is Dalia.   She says she works for Princess Jasmine, who has been hidden away since her mother was killed.  They walk back to the palace but Dalia notices her bracelet is missing.  She assumes Aladdin stole it and turns her back on him in disgust.  Aladdin knows he didn’t steal the bracelet … again … so he looks for Abu, his monkey.  Abu hands Aladdin the bracelet and Aladdin sneaks into the palace to give Dalia her bracelet.  She accepts the bracelet and his apology but she has lied to him.  The woman isn’t Dalia the handmaid, she is Jasmine the princess.  Although she likes Aladdin, she can’t marry him.  She must marry a prince and be seen, not heard.  Undiscovered to Aladdin, he is being watched by Jafar.  Jafar has been looking for a diamond in the rough.  A person of these qualities can enter the Cave of Wonders and find a magic lamp.  The lamp will release a Genie to grant that person 3 wishes.  Jafar wishes to be Sultan of Agrabah so he can wage war on other kingdoms and create an empire.  He believes Aladdin is that diamond.  When Aladdin attempts to escape the palace, Jafar and the guards stop him.  Jafar takes him to the Cave of Wonders.  Jafar offers him all the money in the world if he brings back the lamp.  After a betrayal, Aladdin ends up with the lamp and three wishes.  But as the Genie tells him, wishes are a tricky thing.  But Aladdin will risk it all to have Jasmine.

This movie gives you everything in the original animated classic Aladdin while adding a few more songs (FTC Affiliate Disclaimer).  You get the  Cave of Wonders, Aladdin’s Prince Ali entrance, the Genie’s big number, and a magic carpet.  You also get a new dance sequence a few more songs to express how Jasmine feels.  She is told to be quiet but she won’t be silent.  She wants to be the next Sultan and marry a man she loves.  Now fans, don’t worry, they didn’t change the ending of the movie.  And Will Smith added his own flair to the Genie without diminishing Robin Williams’s legacy.  You will laugh and become a kid again.   This movie is safe for the whole family.  You might have an urge to see the play after viewing this movie.  The dancing choreography and Aladdin’s parkour through the city is smoothly done.  However, with all that work, the Genie’s CGI is a bit off.  It’s easy to see that Will Smith’s head is the only real entity, while his body is all computer.  At times his head is moving in a weird and opposite way from the body.  It becomes very distracting.  Overall, this is a great live-adaptation for the whole family.

As long as you don’t get caught – Jasmine

Get it yourself. Get your own jam – Genie

This is going to be fun – Iago

You always bring me the rough, never the diamond – Jafar

When you have nothing, you have to act like you own everything – Aladdin