The Neighbor in the Window – Review

The Neighbor in the Window – Lifetime – 2 hours and 0 minutes

Karen and Scott tour a home and find gorgeous windows covered up by blackout curtains.  Karen can’t believe someone wanted to cover them up.  When she moves in, she takes them down first.  After they get settled, several neighbors introduce themselves.  One of the neighbors is the married mother of 2, Lisa.  The two women bond over losing a child to SIDS.  Karen showed Lisa a necklace Scott bought her to remember their lost baby girl.  The women go out shopping and Karen finds a killer red dress.  Lisa tells her to buy it.  The next day Karen drops her son off for the first day of school wearing the red dress.  She turns around to see Lisa wearing the same thing.  She can’t believe Lisa bought her dress but brushes it off as a coincidence.  Later at a neighborhood BBQ, Karen notices Lisa has her same dedication necklace.  Karen has to excuse herself.  Inside Karen sees Lisa’s husband Dan and talks about losing their baby.  Dan is confused.  He and Lisa never lost a child, his sister-in-law did.  Karen can’t believe Lisa lied about losing a baby.  When Karen confronts her about it, Lisa says she has Parkinson’s Disease.  It’s not long before Karen learns that’s a lie too.  Karen tries to ignore it until Lisa asks Karen to borrow $5,000.  Karen’s refusal brings on a call to the police, a call to a lawyer, and a restraining order.

Based on true events that inspired the novel False Victim by Kathie Truitt, Lisa is suffering from False Victimation Syndrome stemming from her Borderline Personality Disorder (FTC Affiliate Disclaimer).   This mental illness manifested itself into a unique form of Acquaintance Stalking.  It’s shuddersome how easily Lisa is able to manipulate the people around her by staying one step ahead.  She accuses Karen of things she has already done or will do.  With a culture so set on believing, it’s easy to forget you can’t prove a negative.  While the ending is tormenting, it’s honest.

She has no idea what’s ahead of her.  And I wish I could warn her – Karen

I believe you. It’s her I’m not sure about – Scott

Don’t worry Team Mom, I got him – Lisa

It appears yo have won the annoying neighbor lottery – Alan

Carrie and her husband, Luke, tend to their championship horses with their stablehand, Sophia.  Sophia has lived on the ranch for years with her mom Maria.  Maria has been the maid for Carrie’s family since before she was born.  Carrie rides up to the front gate to see her mother, Grace, who has come home early from vacation.  And she brought a surprise.  Her new and much younger husband, Reed.  Carrie can’t believe her mother would move on from her father so quickly.  Carrie believes that Reed is only after her mother shares in the ranch.  Carrie confronts Reed and he warns her to stay out of his way.  If she tries him, she will lose.  The next day, Reed and Grace go riding.  Grace is an experienced rider but Reed is a newbie.  Soon, Reed is screaming for help.  Grace fell off her horse and lost consciousness.  At the hospital, she is put in a coma to reduce brain swelling.  And Carrie knows who to blame – Reed.  She wants to prove Reed tried to kill her mother for her money.  Carrie has some serious killer daddy issues.

A great twist to a too familiar storyline.  Just by the title and promos, Lifetimers will determine they know how the story will end.  You will salivate waiting for the shovel to be used.  With a controlling father and a DNA test, the entire “bad step-dad” plot is changed to something even more sinister.  You will fall in love with this huge twist.

I even pulled your SAT scores – Carrie

Pretty lousy way to start off a marriage – Luke 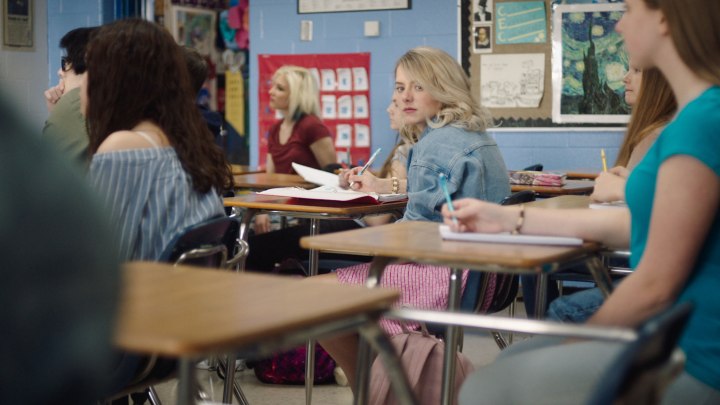 Maddie and Ava have welcomed the new girl, Kelly into their circle.  Kelly is a foster kid who feels out of step due to little financial support.    After class, Sasha finds Kelly and asks if she came from the family that got a roof from a charity.  Kelly says yes.  Sasha takes out her camera and starts recording an Instagram video that praises herself and embarrasses Kelly.  Kelly has met “popular, mean girls” like Sasha at her other schools.  So she decides to knock her off her pedestal.  She steals an expensive bra and makes a seductive post while hashtagging it ‘suck it, Sasha’.  After getting 300 hits in a few hours, Kelly has support behind her cause.  She wants to beat Sasha on social media by any means necessary.  A few days later, Kelly uses her foster dad’s death in an Instagram post to tell Sasha where she can go.  Ava and Maddie cheer her on and join the fun.  When the social media competition turns deadly, who will survive?

This movie takes cyberbullying and social narcissism to an extreme.  Kelly is only concerned with clicks and likes.  She will use sex, death, and tears to be number one in school.  When she hears, Maddie and Sasha were best friends, you can see her jealousy grow.  The message is geared towards teenagers, however, there are several adults that could learn from this movie too.  Likes on social media don’t mean you are really liked.  On the other hand, the movie doesn’t demonize technology.  It uses technology to set the record straight.

After hearing her boss is going to give Michael the pink slip, Dori sticks her neck out for him.  Dori is a low-level editor for a publishing company and Michael was one of their best selling authors.  He hasn’t written anything in a year.  Michael is one of Dori’s favorite author so she agrees to work with him.  She has 30 days to get Michael to deliver a book.  If not, he will be fired and she will never be promoted.  She is dumbfounded when she meets Michael.  He is a slob, rude, and a party boy.  He believes all the romance novels he’s written are garbage and doesn’t want to continue writing them.  To add-on the pressure, Dori is engaged to Philip, the perfect boyfriend.  He offers to handle all the arrangements for her.  He even hired a wedding planner.  When feelings go awry, what couple will make it to the altar?

This movie grabs your attention because it talks about literary romance being fake while presenting the viewer with a literary romance subplot.  This movie differs from Hallmark because there is a real scandal, lies, and heartbreak.  While you can see the ending a mile away, you still get a wedding and a juicy story.  This movie is a fun watch.

It’s not the wedding I’m excited about, it’s about the girl I get to spend the rest of my life with – Philip 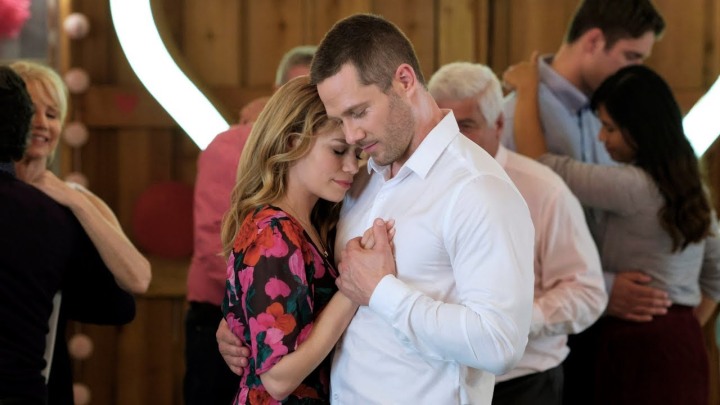 Natalie is down because she was fired from her TV show.  The ratings fell and fans thought she lost her authenticity over the years.  Her mother suggests she face the past to get her authenticity back.  Natalie hasn’t been home in years and doesn’t want to go back.  She is sure she will run into her ex-boyfriend Zack.  Her mom assures Natalie that Zack is barely around.  After a little more nudging, Natalie says goodbye to her boyfriend Brook and heads back to her hometown.  Natalie doesn’t know her mom and Zack’s mom have devised a plan.  They believe the two are perfect for each other and will try every trick in the book to make them see it.  Their plan involves an auction, hardware store meet-up, and a kissing booth.

This is a classic Hallmark plot, with funny, nosy moms will tickle your funny bone.  It doesn’t take long for viewers to see that Brook is a non-factor in the story.  He is just a prop for Natalie to see what she really wants in life.  Seeing Jess and Zack bicker back and forth is funny but you are just counting down to the moment they fall in love.  It’s the moms that make this movie entertaining to watch.  Seeing their sneaky, persuasive, and nagging ways to get their kids together is the stuff of legends.

People want perfect, I can do perfect – Natalie

Don’t worry about it man, true love is hard to find – Eric

You’re an artist, there’s a romantic in there somewhere – Jess

Aren’t you allergic to lilies – Zack