Lynne Cheney worries she has married the wrong man.  He has drunk himself out of college and every job he has ever had.  She wants to go into politics but can’t because she is a woman.  She hoped her husband would share her dream but Dick isn’t living up to it.  She threatens to leave if he doesn’t do better and clean himself up.  She refused to be like her mother.  Dick promises to change and makes good on that promise by entering an internship during the Nixon White House under Donald Rumsfeld.  He quickly learns that loyalty and a closed mouth will get you far.  As he continues to climb in the White House, changes in leadership and his personal life start to derail his presidential future.  But Dick Cheney decides it’s better to be a ghost and get the job done with a pure focus on Unitary Executive Theory.  Dick Cheney will make decisions that can be seen in our America today.  So you have to ask, is he the good guy or the bad guy?

Politics aside, Amy Adams and Christian Bale give wonderful performances.  If you lean to the right, you may not like the overall tone of the movies view on Dick Cheney.  However, watch it for the start of Fox News and how focus groups shape politics.  If you lean to the left, you will love this movie.  But don’t leave the theater feeling superior.  The left perpetuated the words and the phrases derived from these focus groups.  And folded under political pressure.  We have all had a hand on what is going on in the country.  So are you leading or being lead? Before you answer that question, see this movie.

Once is an ‘I’m sorry’. Twice makes me think I married the wrong man – Lynne Cheney

We’ll take it all – Donald Rumsfeld 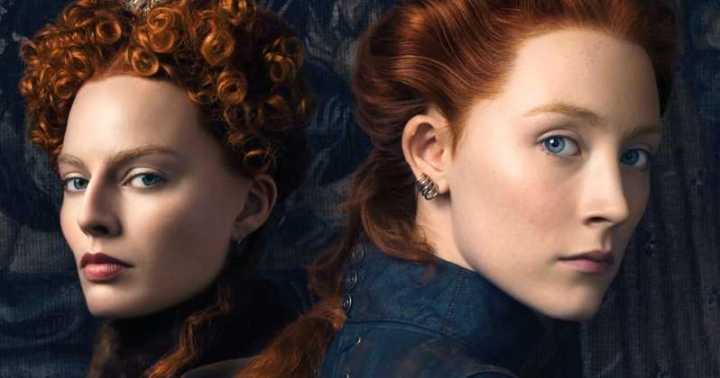 Mary Queen of Scots married at 15 to the Catholic King of France.  However, 3 years later she was a widow.  By that time, Scotland had fallen under Protestant English rule.  With Mary being the rightful Queen of Scotland, Queen Elizabeth knows her power is threatened.  Since Queen Elizabeth decided not to marry or have children, if Mary has a child it will be the rightful heir to the throne.  So Queen Elizabeth comes up with a plan to find an English nobleman for Queen Mary to wed.  In doing this, the child would be of England and Scotland but she hopes the baby will continue the Protestant rule.  And Elizabeth has a man in mind; her own lover, Earl Robert Dudley.  Queen Mary wants Scotland to stop fighting over religion.  She wants people to practice as they choose.   The Catholic Priest storms from her court.  He believes that it is against God for a man to follow a woman.  Especially a woman that believes as Mary does.  Seeing her court fall apart, Mary must bring them to the fold.  When she meets, Robert, she is intrigued about getting married and having an heir.  But she wants her husband to Catholic and Scottish.  But Elizabeth has the power to reject her marriage.  So, Mary decides to marry an English man she can control and raise the child to take over the throne.  That man is Lord Henry Stuart.  But who really controls him?  The struggle for power between two Queens will bring arguments of gender, sex, religion, the monarchy, birthright, family duty, and lies that can only be solved with blood.

Based on the book Queen of Scots: The True Life of Mary Stuart by John Guy, this movie can be hard to watch during the murder and rape scenes but its necessary for the story (FTC Affiliate Disclaimer).  While both women had their strengths, they continuously fell to the pressures of their council and court.  The two women only meet once to try to explain their side, so don’t look for a continuous back and forth between the two.  They consistently talk through their ambassadors.  This visual chess match is a lot to keep up with but is worth it for a strong dialogue, great costumes, and majestic cinematography.  This movie is not rated as a 4 because it is not good enough to buy on DVD.  But it is worth full price at the theater.

How does it feel to rule all that you see – Henry

No, I choose to be a man – Elizabeth

Our swords are not just for show – Mary

Michael Banks is doing everything to keep the family and household running after his wife died.  Their children Annabel, John, and Georgie Banks are doing as much they can to help.  Twins Annabel and John look after Georgie and act more like adults than children.  Jane Banks is doing all she can to help her brother during this rough patch in his life while protesting for laborers.  As the house is in chaos, lawyers come to Michaels door with a repossession notice.  He fell 3 months behind on his mortgage payment.  He must repay the entire loan by Friday or the bank will take their home and the family will be on the street.  Michael knows this happened because his wife kept up with the finances.  While Michael does not have a lot of money, he remembers his father had stock in the bank that was willed to him and Jane.  Williams Wilkins promises to keep the bank open until midnight on Friday because he can’t find a record of the stock purchase.  If Michael can produce a certificate of stock, Wilkins will give him the house.  Seeing the family in dire straights, Mary Poppins come to help the Banks children again.  And their children as well.

Based on the novels by P.L. Travers, this movie is fun and adventurous (FTC Affiliate Disclaimer).  It keeps some of the magic you remember from the first movie and adds some more.  It makes you want to look at Mary Poppins again for the small things you missed (FTC Affiliate Disclaimer).  Emily Blunt gives a stellar performance.  With the same stance, tone, and sharp wit, it’s like being in a time warp.  You love every moment she is on screen.  The problem is the story is just a bit flat and the songs are more memorable for their performance than their words.  You don’t remember what was said or why it needed to be sung, you just remember the dances and the graphics.

I was flying a kite and I caught a nanny – Georgie

Maya has worked 15 years in a big box store and 6 of them as the assistant manager.  She has implemented new and innovated ideas that have grown the business.  Now, she really wants the new manager position.  She believes she has proven that she has the knowledge to do the job but she doesn’t have a college degree.  She had to drop out of school, earned her GED, and start working immediately.  With all the managers having an MBA, she wishes her street smarts equaled book smarts.  As expected, she doesn’t get the job.  However, she goes to her “surprise” party and makes a wish with her best friend Joan and Joan’s son Gil.  She wants the world to appreciate her for her smarts and not a piece of paper.  Gil works his computer magic and creates a Facebook account, websites, and an Indeed account without her knowledge.  The next day, she gets a call from FNC and can’t believe it because she never applied.  She is invited to the top floor and gives an honest interview about their successful and failing products.   She is offered a consulting job on the spot.  It’s only a matter of time before the world finds out that her online presence is fake.  But Maya will unveil a truth about her past that has kept her lying and blocking her future.

This movie is surprisingly funny.  Instead of slapstick humor, it shoots for everyday quips and jabs to make you laugh.  The chemistry between Leah and Jennifer is undeniable every time they are on screen together.  You will look forward to seeing them on screen in every scene.  Leah’s comedic timing is spot on and makes you wish you had a friend like Joan.  So, see this one matinee with the friends and ask yourself, is too much emphasis being put on degrees?

Remember, you are supposed to be my right hand – Arthur

I hope to be like you when I grow up – Maya

Mark was in a bar and heard men putting down crossdressers.  Drunk, he admitted he liked wearing women’s shoes, just the shoes.  And the higher, the better.  He was almost beaten to death by the 5 men.  One having a swastika tattoo.  A bartender Wendy, thinking he was a trash bag, found Mark in the parking lot close to death.  Now, Mark has no memory of his past.   He remembers parts of the attack including the song on the jukebox: Stand by Your Man (FTC Affiliate Disclaimer).  He looks at items around his house to examine his past.  He knows he could illustrate but he can barely write his name.  So, he created a town called Marwen (Mark and Wendy) with dolls and takes amazing pictures.  One doll represents him and the other represents different women in his life.  Julie was his physical therapist.  Roberta runs the hobby store where he buys his props.  Carlala works as a chef in a bar and he helps her from time to time.  Anna is a caretaker that comes in once a month.  Suzette his favorite actress.  Nicol is his newest doll and the woman that moved in across the street.  Marwen is set in Belgium and Mark has Nazi soldiers to represent his attackers.  The only doll that does not have a human representation is Deja.  Mark doesn’t know where she came from but she often haunts him.  With is attackers’ sentencing hearing just days away, Mark anxiety is growing and it could consume him.  He will need the Women of Marwen to help him face the past.

This movie is amazing for its ability to switch between the real world and Marwen.  However, it feels more like a case study on how the human brain deals with trauma than the story of triumph.  With so much of the story told, you leave the theater feeling like something was missing.  You wanted to know something more about the women.  Julie and Wendy were no longer in his life.  But only Wendy was in the RIP box.  Julie has her own place in Marwen.  Why were these two dolls treated differently?  Then, it changed direction to being a story of triumph over adversity to a love story then back to triumph.  With “Hollywood” injection into the story, the overall plot lost its luster.

Now, look at that. We have something in common – Roberta