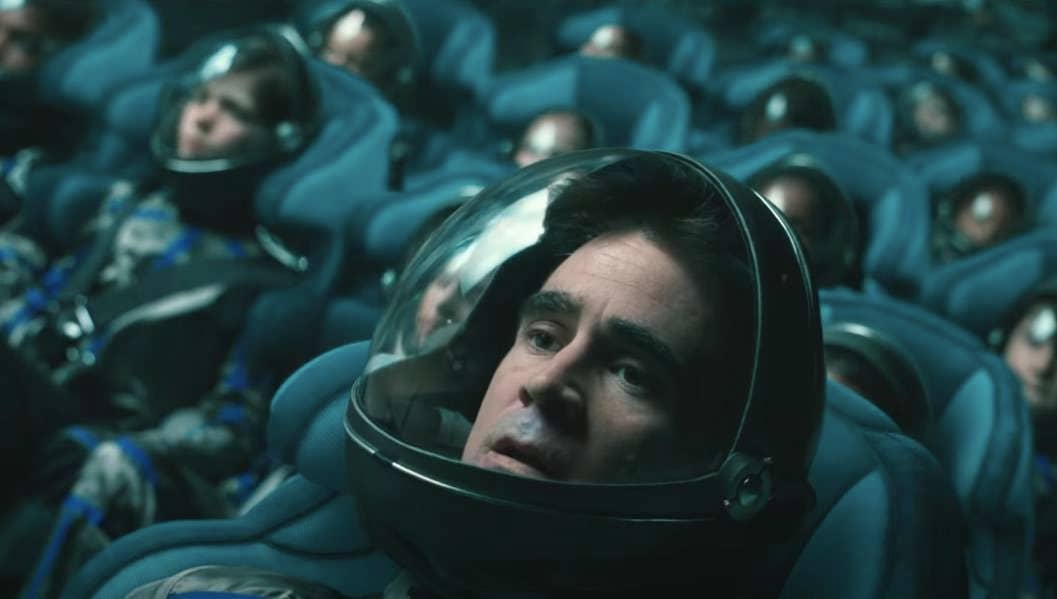 Earth is heating up, and humans must find another hospitable planet.  They find a suitable second Earth, but it will take 83 years to travel there.  Richard suggests that scientists breed a crew from other scientists, raise them indoors and in isolation, and train them to sustain the ship.  The crew’s grandchildren will be the ones who reach the new Earth.  After years of training, Richard discovers most of the child crew are scared of the future.  He reports these fears to his commanding officers and offers a solution.  Richard will go with the kids and care for them in space.  He will ease their worries and continue to raise and train them.  But Richard knows he will never see the new Earth.  The commander agrees, and Richard launches into space with a crew of kids whose grandchildren will make it to the new Earth.  For ten years, everything goes well until the computer tests positive for toxic chemicals in the plant water.  Since the plant water is filtered urine, Christopher wonders what’s wrong with them.  As the crew sleeps, Christopher and Zac search the database for the unknown compound in their urine causing the positive reading.  They learn the compound blocks their desires and makes them dull and docile.  And it is mixed with a blue dye to ease digestion.  They determine the chemical compound is in their daily-required drink that they call “The Blue.”  Zac and Christopher decide to stop drinking it, and they feel everything for the first time, including anger, jealousy, and lust.  After one day without “The Blue”, Zac inappropriately touches Sela, and Richard punishes him.  Later, Christopher and Zac roam through the halls and catch Sela in Richard’s room.  When Zac sees Richard touching Sela’s shoulder, he is furious.  Christopher and Zac can’t focus on the work, and Sela notices.  The next day, Richard and Zac prepare to go outside to repair the spacecraft, but recent unacceptable behavior makes Richard choose Christopher to help him.  During the repair, a shadowy figure moves past Richard, and he screams in pain.  Christopher pulls Richard inside, and the medical team tries to help him, but it’s too late.  The crew looks at the rule books, and they must vote to choose a new leader.  They pick Christopher.  His first act is to find out what happened to Richard.  Zac thinks it’s an alien, but Christopher isn’t so sure.  On the hunt for the truth, the crew will divide into two factions: the believers and the non-believers.  After blood and accusations, only one will come out on top.

This futuristic rendition of Lord of the Flies takes some time to get interesting, but it does after the crew breaks down (FTC Affiliate Disclaimer).  One character receives the “Samuel L. Jackson’s Deep Blue Sea” treatment during a speech, and though a bit predictable, it will shock you.  While removing “The Blue” from them does heighten their senses, you have to remember this heightened awareness comes with raging teenage hormones.  It can only end badly.  As the movie progresses, it changes from an alien plotline to a whodunit.  With well-crafted sets and costumes, you will dive into the plot.  But parents, if you are watching with your teens, be prepared to be uncomfortable.

Who cares what you don’t know – Zac

Nobody chooses what they were born with – Richard

Our lives are important – Sela

Frances sits with her advisor as he delivers dreadful news: all her money is gone.  She has no idea what to do next.  He tells her to sell everything in the home and use the cash to start a new life.  After her husband died, Frances didn’t plan on living past her money but she lives.  She drinks her woes away when her son, Malcolm, walks into the room to find her drunk.  Malcolm spent all day working up the courage to tell his mom his secret.  He got engaged to Susan, and they want to live together.  But Frances tells Malcolm her news first, and, much to Susan’s chagrin, Malcolm halts from telling the truth.  When Malcolm tries to tell Frances again, she cuts him off with more news: a friend offered to let Frances and Malcolm stay in her apartment in France.  Malcolm keeps quiet.  Then he tells Susan he’s leaving but, as selfish as it sounds, he wants them to stay together.  Susan breaks up their relationship.  Frances, Malcolm, their cat, and thousands of dollars get on a cruise headed to France.  Before Frances’ “French Exit,” she will allow a private investigator, a clairvoyant, a new friend, an old flame, and a fiancé to stay in this cozy apartment.  She will connect to her husband and reveal a horrific end for her vacation.

Based on French Exit by Patrick deWitt, this dark comedy provides unusual laughs at uncomfortable situations (FTC Affiliate Disclaimer).  You will dream of having Frances’ bravado in everyday life.  Her character is someone to be admired and feared like Emma.  Although her life falls apart, Frances continues to demand the best of others.  While this movie is entertaining, you won’t have an urge to buy it.  But if you don’t like dark comedies or rich people’s problems, this isn’t the movie for you.

Ahh, to be young-ish and in love-ish – Frances

Would you describe yourself as a coward – Susan