In January, the government announced The Presidential Oath.  This oath pledged loyalty to the president and to protect the country from all domestic and foreign threats.  The citizens of the United States have until Black Friday to sign the pledge.  While the government says no actions would be taken against those who did not sign it, those who do will receive a tax credit.  Hearing this news, Chris is disgusted.  He believes that forcing patriotism is un-American.  And he vows never to sign it.  Now 3 days before Black Friday, Chris and his wife Kai have not signed the oath.  But most of his family decided to sign.  Including his brother Pat, Pat’s girlfriend Abby, Chris’s mother Eleanor, and Chris’s father Hank.    Chris’s sister Alice and her husband Clark have not signed as well.  Chris has been hyper-obsessed about the fallout of not signing for the past few days and has been watching the news non-stop.  Eleanor and Kai have asked Chris to not talk politics during Thanksgiving dinner.  But when a protest turns violent, the insults start to fly and secrets within the family are exposed.  And to make matters worse, someone report Chris and on Black Friday morning the CPU (Citizen’s Protection Unit). This Unit is a part of the DOD set up to arrest those who express themselves violently towards the oath. When the CPU shows up on Chris’s doorstep demanding answers.  This Black Friday night will end in blood, tears, gunshots, hostages, accomplices, and apple pie.

This movie is the uncomfortable dinner that we will all have this year due to the difference of opinions, of political views, and of patriotism.  So don’t be surprised if you pick a side early in the beginning.  Since this is a movie, that does not require a response, take the time to listen to the other’s point of view.  It’s easy to jump to a conclusion and it’s easy to become upset but the hardest thing to do is listen.  While this movie is riddled with humor and political satire, it does become dark.  And you would question what you would do in the circumstance.  Who was right and who was wrong? Was there ever a real right or wrong? So if you prefer your humor dark and your politics on the table, this is the movie for you.  Otherwise, wait for Vudu (FTC Affiliate Disclaimer).

If I get fat you’ll leave me for Drake – Chris

The Old Man & The Gun – Review 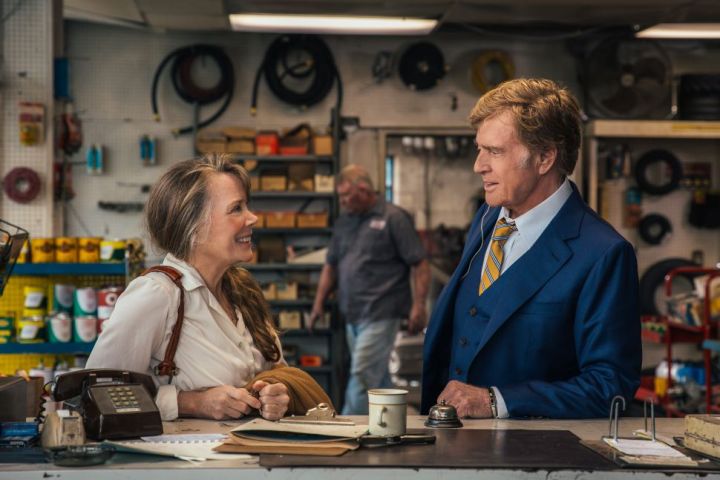 After looking around a crime scene, John can’t believe the description of the criminals.  It was 3 older men who robbed a bank with precision, under 2 minutes and had a shootout with the police.  He believes this work must have been done by professionals.  So he goes on the news with preliminary sketches of the 3 man and names them “The Over the Hill Bandits”.  Unbeknownst to John, the three men are sitting in a hotel room nursing their wounds.  They laugh at the name but swear this is the last job.  While they didn’t get the money they wanted, it will be enough to retire.  However, one robber wants to stay in town.  Not just for more bank robberies but for Jewel.  A woman he met on the side of the road.  For brief moments, he gives Jewel a glance of who he truly is but he laughs it off with a joke.  However, Bob has been stealing and robbing since grade school.  And he never plans on stopping.  Jail isn’t a fear for him, it’s a challenge.

This movie displays a different type of addiction.  While Bob has opportunities to change his life, the ‘every day’ just doesn’t do it for him.  He loves the thrill of the chase and even taunts the police with notes or a smile.  The clothing, news reports, and music are perfect for the early 80s.  Also, the score during a car chase is brilliant.  But the overall movie is slow and a bit repetitive.  Wait for this movie to be on DigitalHD.

Maybe you should stay put – Jewel