The Spy Who Dumped Me – Review

Audrey has 2 highlights in her life.  Her best friend Morgan and her favorite arcade game.  She looks to both of them because her boyfriend Drew broke up with her in a text message.  And to make matters worse, he won’t text back to get his stuff.  So, Morgan grabs her phone and text Drew.  She texts him that she will be setting is stuff ablaze.  Drew calls Audrey back and begs her to stop burning his things.  While at work, Audrey is approached by Sebastian, who asks her to walk him to his car.  She agrees to be nice but he pushes her into a van.  They explain that Drew is CIA and they need her help to find him.  She promises to keep in touch and gets out of the van.   The next day, Morgan is having fun with her latest conquest and Audrey is getting ready for work when Drew comes through their window.  He tells Audrey to hold on to his trophy.  And if he doesn’t make it, she must meet Verne in Cafe S in Vienna at 11 am tomorrow and give Verne is 2nd place fantasy football trophy.  If she doesn’t do it, a lot of people will die.  Seconds later, Drew is killed.  With a slight nudge, Morgan convinces Audrey to keep her promise and finish Drew’s mission.

With an out-of-the-world plot, this movie is funnier and more action pack than the trailer would allow you to believe.  And no, you haven’t seen the best parts in the trailers.  This will make you laugh out loud and cringe.  Also, you will do both at the same time.  It provides a lot of intricate twist in the plot but it isn’t anything new.  You can see the big reveal coming.  The biggest joy of this movie is seeing the two main characters ab-lib the funniest dialogue.  They constantly feeding off each other, upping the ante each time.  While it does have a love story, the sisterhood story between Audrey and Morgan is much stronger.  See this one matinee and bring your best friend. 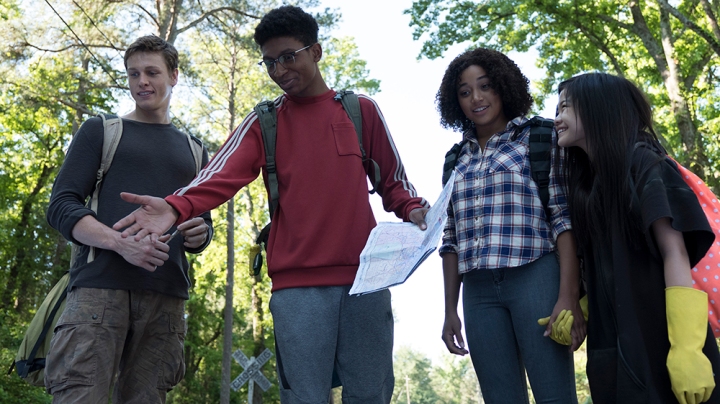 On a typical school day, Ruby sat with her friends at lunch, laughed, and talked.  Then, her friend dropped dead in front of her.  By the end of the month, half of her class was dead.  Soon, 98% of the children in the US would die of IAAN (Idiopathic Adolescent Acute Neurodegeneration).  The remaining children would be left with powers.  The government has asked all the parents to turn their children over to be cured.  President Gray was able to cure his son, so he believes all the children can be cured.  Ruby knows her parents are worried about her being taken away.  So, on her birthday night, she tiptoes into their bedroom and promises she won’t let anyone else take her away from them.  When she touches her mother’s arm, she gets the first sense of her powers by erasing her parent’s memory of her.  The next morning Ruby’s mother doesn’t recognize her and calls the government to take her.  The government takes her to a concentration camp where the kids are separated by their “Danger Level” color.  Greens are the smartest.  Blues can move objects with their minds.  Golds can control electricity.  These are the safest colors.  Oranges and Reds are the most dangerous and should be killed on sight.  Ruby takes the test and she is an orange.  But before she can be killed, she touches the doctor and changes his mind.  The doctor makes her diagnosis a Green.  This camp will be her home for the next 6 years.  Until Ruby is discovered as an Orange and must escape.  With the help of Dr. Cate Connor, Ruby gets out of the camp.  However, when Cate makes a stop to meet up with her partner Rob with the Children’s League, Ruby gets a bad vibe from touching him and runs off.  She hides in Liam (Blue) and Chubs (Green) van with the help of Zu (Gold).  They are looking for a rumored oasis for kids like them.  They believe they will finally be safe there.

Based on The Darkest Minds series by Alexandra Bracken, this movie is The Fifth Wave meets X-Men (FTC Affiliate Disclaimer).  With bounty hunters, doctors, and even their parents turning on them, it’s hard to understand who to trust.  Now fans of the book series, understand this movie won’t fall in line perfectly but it’s still a good movie.  This movie ends on a cliffhanger because it’s the set up for the next movie.   So don’t be surprised if you feel like the movie didn’t have a true ending.  While the major plotline and the subplot aren’t original, it provides some laughs and heartfelt moments.  This is a great matinee for teens over the summer.  However, everyone else can wait for Redbox.

I kinda like myself the way I am – Ruby

What did I tell you about picking up strays – Liam

It’s Charles to you – Chubs