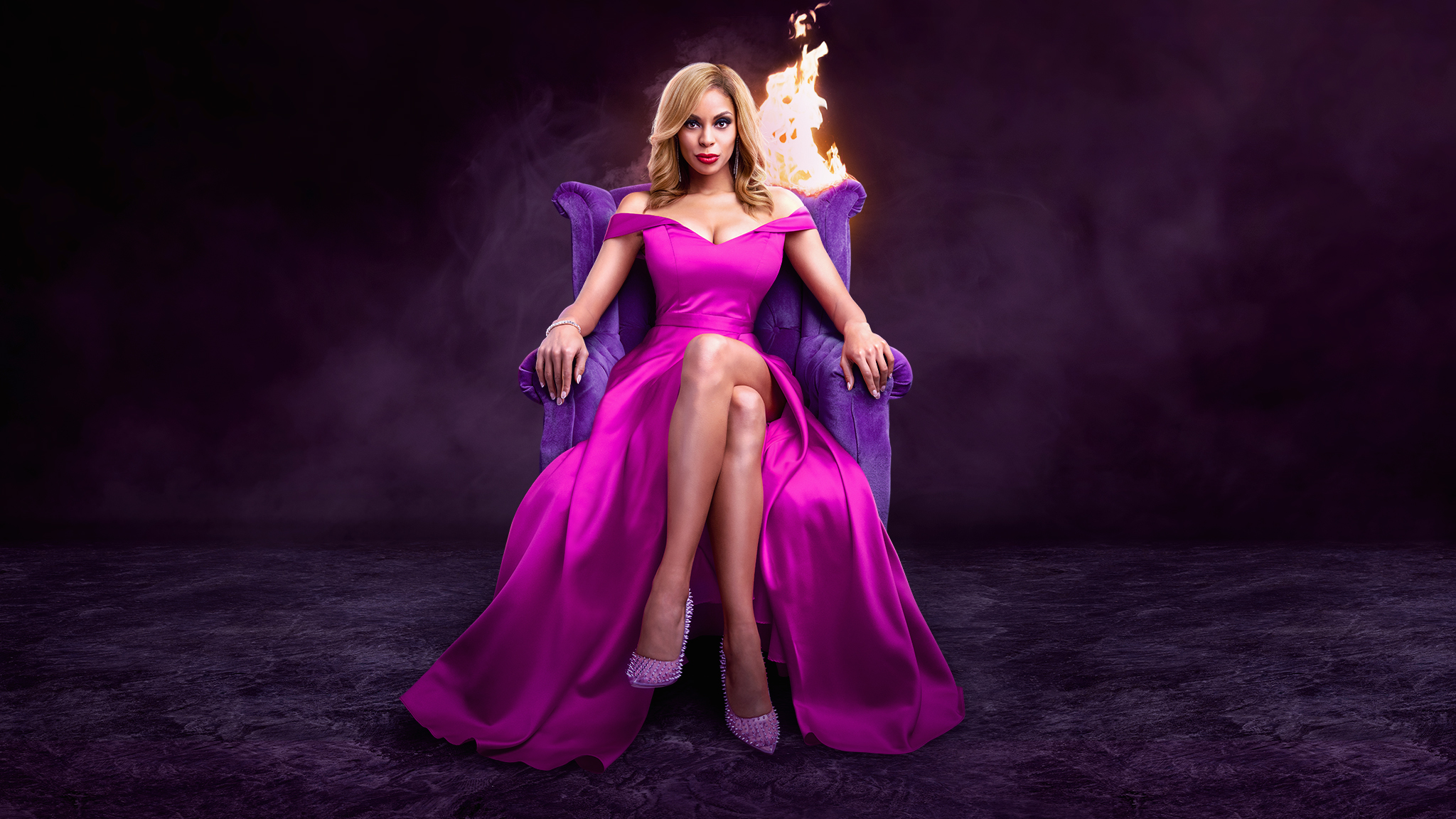 Wendy Williams grew up as the tallest, heaviest, and only black girl on the block, and her parents never let her forget it.  They made comments and tracked her weight every day.  At the store, she would see the gossip rags.  Wendy wanted to be one of the rich and thin celebrities on the cover.  During her sophomore year in college, she got her first radio show.  She looked up to DJ Carol Ford and Kathy Hughes.  So, when Carol hired her for a radio show, Wendy jumped at the chance.  Soon, she is playing the contemporary hits and calling the shots.  It wasn’t until later that Wendy found her winning formula.  She turned her love of tabloid magazines into a tell-all radio show about Hip Hop and R&B artists.  While artists hate being questioned by her, they have to go on her show to get their music played to the largest fanbase in New York.  After her first marriage, Wendy enjoys the single life.  Then, she meets Kevin Hunter.  Wendy sees him as a bad boy with a heart of gold, who’s excellent in bed.  He made himself indispensable in her life as a manager, promoter, counselor, and bodyguard.  Kevin disapproves of her cocaine use but never tells her to stop using it.  While Wendy focuses on her rise to the top with Kevin, she has yet to understand he will be her most dominant anchor.  Between miscarriages, emotional abuse, and affairs, Wendy will have to summon all her strength to practice what she preaches.

Wendy only holds back three things from this movie: her son, her first marriage, and her rapist’s name.  Otherwise, Wendy exposes her raw and unfiltered self from her formative years to now.  She covers the topics in her books (Wendy’s Got The Heat, The Wendy Williams Experience, and Ask Wendy), gives you the heart-breaking tales you never knew about, and sets the record straight on rumors (FTC Affiliate Disclaimer).  Wendy talks about rape, abortion, miscarriages, stillbirth, Eric B, abuse, Kevin, the rise to the top, drug addiction, hyperthyroidism, Grave’s disease, on-air fainting, and her family.  She puts it all on the table and took control of her life story.  You will watch a woman portrait a strong female while going through a ripple of crises and falling into an alcohol-fueled depression.  You are in for one hell of a ride, and no, you don’t know her story.  So, watch and have your tea ready.

Now, it’s time to dish my own dirt – Wendy

I just wanted to have some fun – Kevin

Dana works as an investigative journalist at the Seattle True Press.  Instead of working on her yoga poses with her boyfriend, Jon, Dana finishes her latest article in the middle of yoga class.  Before Jon can complain, Dana runs out of the yoga class and back to work because she got a hot tip.  Dana enters her rideshare and sees another man inside.  She questions why the driver, Ian, hasn’t moved and notices they are boxed in by another car.  Dana gets out of the rideshare and walks to work.  She got proof that a social media company puts its users’ private information at risk.  The owner, Mr. Gonzales, has never been a public figure and doesn’t answer questions.  So, Dana can’t confirm what he does and doesn’t know.  Dana’s editor, Katherine, knows Dana is going on a yoga retreat with Jon to Bali.  So, Dana’s publisher, Mr. Tiffin, offers to give the story to another reporter.  But Dana refuses to let anyone scoop her, so she insists on working on the article while on vacation.  She secretly packs her phone and work computer into her bags and gets on the plane, but the weather dumbfounds Dana.  Dana doesn’t understand why Bali is so cold.  That’s because she is not in Bali; she’s in Canada.  Jon tells Dana that he told her the location several times, but she was too busy to listen.  With thin clothing, high heels, and millions in rupees, Dana boards a bus with several people headed to the retreat.  Their guru for the week is Nicola, and Jon connects with her instantly.  On the bus, she notices the man whose face she has seen before.  He introduces himself as Stefan, the man she almost shared the rideshare with earlier.  After a short drive, the bus stops, and Nicola asks everyone to unload with their stuff.  The rest of the trip will be a hike to the lodge, so Dana takes a look at her heels and hates the idea.  Halfway there, Dana drops her purse with her computer and phone inside, and it lands in a pond.  Frustrated, Jon ends the relationship.  He can’t take her work addiction anymore.  At the lodge, Nicola informs Dana only the Cozy Suite remains, and Dana must pay today.  Also, there is no way back until the end of the week, no WiFi, and no cell service.  Since Stefan came alone, Nicola paired Stefan with Dana for all the activities.  With Dana’s beginner status, Stefan has his work cut out for him.  Seeing she is a tech addict, he bets she can’t get into the zone and commit to yoga.  Dana takes his challenge.  With his aloof behavior, she starts to track him and fall for him.  Stefan sneaks in food, has WiFi and access to anything he wants.  Dana wants to learn more about him.  However, when she discovers the truth about Stefan, can she believe him or will she trust her sources?

This movie is a great romantic comedy that makes the main character the work-seeking, neglectful partner.  Dana will work at any time and any place, so the viewer understands why Jon wants to break up with her.  Jon tried for years to get her to focus, but Dana didn’t respond to his techniques.  Stefan connects with her because he understands her desire to work.  But Stefan knows the effect it can have on her life if she doesn’t slow down.  He praises her while guiding her.  Soon, Stefan has her doing advanced poses and enjoying the peace around her.  You will enjoy it too.

Guys don’t worry.  I finished by the deadline – Dana

I have WiFi – Stefan

Courtney works for Belle La Vie as a personal concierge for the uber-rich.  She handles every demand, request, and whim, no matter how big or how small.  After putting the finishing touches on her latest client’s request, Courtney’s boss, Dana, calls Courtney into her office.  One of Dana’s employees left to start a company with 2 hours notice.  The employee left notes about the next client, Joe Franklin, with a platinum package request to Canada.  The employee planned the trip for a couple, but the plans changes, and Joe is going alone.  Dana asks Courtney to take over for the employee and to make sure Joe has every experience, no matter how lavish.  She didn’t include his interest in the dossier, so Courtney isn’t sure what to plan.  The next day, Courtney waits on the tarmac to greet Joe but accidentally introduces herself to the pilot.  Then she meets Joe.  For a rich man, Courtney notices that Joe acts like a fish out of water.  He requests root beer instead of champagne, doesn’t know where to put his luggage, and plays with the seats.  They arrive at the hotel, and Joe can’t believe he has personal staff to cook and prepare his room at all hours of the day.  Courtney helps Joe get settled and plans his days in advance.  Small problem: her plans are too upscale for Joe.  Courtney doesn’t know that the trip was for billionaire Alan and his wife, but Alan had to attend a last-minute conference.  So, Alan gave the vacation to his best friend, Joe, for Joe’s birthday and his broken heart.  After two years with his ex, Joe’s girlfriend dumped him for a man with more money.  The more time Joe spends with Courtney, he starts to fall for her, but Joe worries she wants the rich guy she thinks he is.  First, Courtney can’t date the clients.  And second, she saw how unhappy her high-end clients are, so money doesn’t matter to her.  Since Courtney thinks Joe is rich and a client, she ignores her growing feelings for him.  It will take a fairy godmother and godfather to bring these two together.

Sit back and enjoy how the other half does vacation.  On one hand, you will fall in love with the accommodations, but Courtney’s menu, on the other hand, not so much.  Joe wants pancakes and eggs for breakfast, but she pre-orders food he can’t pronounce.  She schedules excursions, but he wants to snowboard, shop, and curl.  Courtney falls for him because his ‘everyday man’ mystique is appealing yet unexpected.  He falls for her because she is open-minded and fun.  Seeing Courtney’s relief at his mundane activities brings Joe joy.  As you cheer for this couple, they bond over root beer and poutine.  This film will be your favorite movie this season.

I’m not late. Everyone else is just early – Courtney

You’re impossible.  You have to stop with this low image of yourself – Alan