Heaven has found her mother family and her step-grandfather, Tony welcomes her with open arms.  Her grandmother, Jillian, looks down on Heaven’s past, clothes, and father’s side of the family.  Heaven quickly realizes she doesn’t have the graces and charms of her aristocratic family and feels out of place.  However, she hopes with time she can adjust.  But Jillian doesn’t want Heaven around for more than a few days.  Heaven assumed she would be able to stay longer.  Tony offers to allow her to stay but it will cost.  She has to give up her family, stay away from the maze, and give him what he needs.  She agrees but lies to him about her age and Angel’s portrait doll.  Tony convinces Jillian to let Heaven stay, buy her clothes, and send her to school.  Like in her old school, she is the outcast for being hill folk.  But she finds solace in Tony’s brother Troy.  Tony forbids the relationship but they continue behind his back.  Not long after, the couple is engaged and Heaven is ready to rejoice.  But this moment of bliss will be dampened by the lies told by Heaven and Tony.  The lies will leave a path of pain, destruction, and death.

Book two of the five-part series has more twist and turns than the first book (FTC Affiliate Disclaimer). Reader beware, this reviewer has not read the books, so this will be a review on the movie alone.  It’s hard to believe anyone’s life could be this twisted but you wouldn’t expect anything less from V.C. Andrews.  The costume and set designers did a great job of displaying the Tatterton’s wealth but keeping it within the time period.  It feels like the movies are back on track from the first movie but mistakes will need to be fixed in the next few movies.  Book lovers, watch with caution and forgiveness.  Watchers only, get ready for a wild ride.

Maids, transform this ragamuffin into something more suitable of our company – Jillian

Do you want to be a somebody? Do you? – Tony

Well, I won’t tell if you won’t – Heaven

Every night, I dream of my own death – Troy

So, you come to gloat – Fanny

The VKs (Villian Kids) have gone back to the Isle of the Lost.  They are choosing 4 kids to come to Auradon Prep.  After choosing Celia (daughter of Dr. Facilier), Dizzy (granddaughter of Lady Tremaine) and twins Squeaky & Squirmy (sons of Mr. Smee), the put the kids’ belongings into a limo, open the barrier, and drive off.  Before the barrier could close, Hades puts his hand through.  Carlos, Ben, and Jay try to stop him but they couldn’t.  Mal turns into a dragon and attacks.  She wins but Hades uses his amulet to drain some of her powers.  When Belle and Beast learn of the attack, they worry about opening the barriers in the future and letting evil into Auradon.  Ben wants to continue his work to help kids of the Isle.  However, when the crown and Malificent’s wand is stolen, Mal decides to close the Isle of the Lost forever.  Mal believes that Uma (daughter of Ursala) or Hades is the culprit.   They have no idea the robber is closer to them than they know and on a path of revenge.  First, the robber attacks Mal using the power in the staff.  With Mal’s powers down, the only object that can defeat the wand’s magic is Hades’s amulet.  They must go back to the Isle of the Lost with Celia to get the amulet.  Nevertheless, they are too late.  The robber puts Auradon to sleep and continues the reign of terror.  The team must get the amulet, get back to Auradon, and save their friends.  Good thing they have bad guys by their side.  But will Mal’s lies to the VK’s ruin her chance to defeat the robber.

If you are following along, this movie takes place after Descendants 2 and Rise of the Isle of the Lost (FTC Affiliate Disclaimer).  It is bittersweet moments for fans of the franchise and Cameron Boyce.  So, let’s go through the sweet moments.  The songs and dance numbers outshined the previous 2 movies (FTC Affiliate Disclaimer). One song that stands out is the Queen of Mean.  You will be singing this song for days to come.  This movie didn’t rely on the known bad guys and good guys to push the story along.  It wrote its own story while staying true to its roots.  It also took time to deliver some strong messages in a way kids could understand.  This movie provided laughs for kids and strong irony for adults.  Now, the bitter.  This was the last movie in the series and the last Disney film for the late Cameron Boyce.  Fans should use this movie as a moment of peace, joy, and a celebration of life and art for the late actor.  His legacy will continue to shine in this movie and with his foundation:  The Cameron Boyce Foundation.

There can’t be no more going in and out. I think we have to close the barrier forever – Mal

Most people get dumped because they aren’t good enough. I wasn’t bad enough – Audrey

Mal, what do we do? How do we keep evil out of Auradon – Belle

I especially love the lack of dirt – Celia

He’s taken. If you want a dog, adopt a rescue – Carlos

You, my little duckling are ravishing – Harry

Actually, I would too – Doug

All Brooke ever wanted was a husband who loved her.  Now, she has all the money in the world but feels ignored and unloved by her husband Steve.  She tells her friends that she feels trapped in a loveless marriage.  One tells her to express her feelings and the other tells her to have an affair.  Before Steve leaves for work, he informs her an insurance agent is coming over to discuss changes in their life insurance policy.  Then, he warns her the new insurance guy is attractive.  A few hours later, Jake is at her door.  She notices his charms and he notices her beauty.  He tells her the life insurance policy will be in a trust and the payout has been increased to $15 million.  He asks her an important question, “How would you feel if your husband died”.  She ends the conversation but he is on her mind.  The two meet again and an affair starts.  While Brooke is taken by passion, she feels guilty and tells Steve.  Steve decides to repair their marriage by going to the mountains.  Brooke tells Jake the affair is off.  Jake decides the best way to fix their relationship is to kill Steve.  Now, Jake just has to convince Brooke to do it.

You must record this one so you can watch it twice.  Normally, this type of movie starts with a woman killing her husband and a relative uncovering the clues with dumb cops a step behind.  This movie is not that at all.  As you play the game, you never know who is truly in control.  Was it Jake, Steve, or Brooke?  At the end, who will win the game?  There are some unanswered questions, like Brooke’s real name, the hatred Steve has for his mother in law, and who started the real plan.  Even with the unanswered question, you will be glued to your seat with your jaw on the floor.

Why’d you say that – Steve

Does your husband know that you’re not completely happy – Jake

You should not be asking me that – Brooke 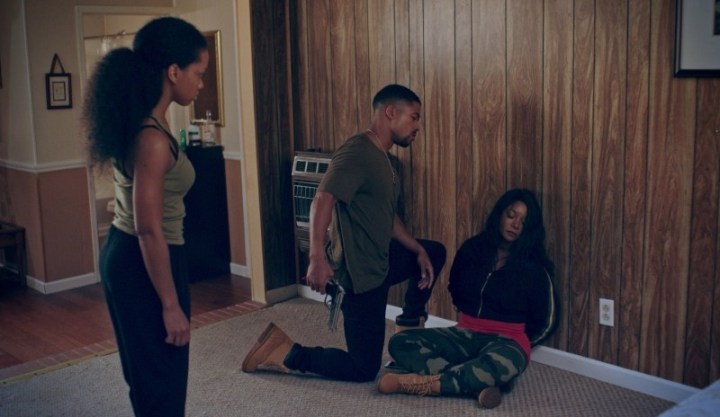 Tiffany and Shawn have been friends since grade school.  She owns a successful salon and Shawn owns a cab.   Both are married to other people.  Tiffany is married to Lawrence and they have two sons.  Shawn’s married to Amber and live a comfortable life.  But Amber doesn’t know that Shawn borrowed money from Tiffany to keep his business afloat.  She refuses to take the money and tell him to use it towards his bills.  During a party, Amber finds bills that reflect a deep money issue and she confronts Shawn.   Shawn tries to explain but Amber makes it perfectly clear that he is falling short of her expectations.  The next day, Shawn is found dead in his car.   Tiffany is devastated and wants to help plan his funeral.  Amber shots Tiffany down and starts the plans to have his body cremated.  Tiffany can’t believe Amber is not burying Shawn and demands Amber stop the cremation.  When Amber refuses, Tiffany voes to stop her.  Amber’s lack of empathy, sympathy, and grief makes Tiffany believe she had something to do with Shawn’s murder.   Tiffany hopes to stop Amber from cremating Shawn finding clues to have Amber arrested for Shawn’s murder.  Then, he can get the proper burial she believes Shawn deserves.  Before Tiffany can bring Amber to justice, she will alienate her family, uncover some past emotions, and put her life in danger.

Inspired by true events, this movie has some laughs, a little fear, and plenty of clues.  However, the overall story doesn’t capture attention like others in the Love, Lies, and Murder promo.  This feels more like a Lifetime movie than a TV One movie.  You know how it will end so the journey must be strong.   The journey doesn’t compel you to watch the movie.  Nevertheless, the ending does capture your attention with one final secret exposed.  So, stick around for the biggest reveal.

Bye.  Thank you for your non-services – Tiffany

He’s in a much better place now – Amber

Yes, it is. You just too damn selfish to admit it – Lawrence

Amelia Tate was an aspiring actress until a tragedy struck her family.  She puts her dreams aside to take care of her younger sister, Katherine.  Now, Amelia manages a coffee shop and acts in local plays.  Katherine learns about an open casting call for an Italian film and begs Amelia to send in a tape.  Out of thousands of entries, Amelia is picked and flown to Italy for filming and a press junket.  To help control and get ahead of the media, Dominic and Sophia, the director and associate producer respectively, hire a paper to write about Amelia.  With her head spinning with all the information, Amelia confides in the hotel staff.  She doesn’t know that one of them is an American reporter, hoping to turn into a writer, named Phillip.  When he hears about the bio on Amelia, he finds Dominic.  Philip request to be the writer of Amelia story.  He gets the job and unveils his true self to Amelia.  She laughs off his fake accent and cover story.  But she warns him that she will only give so much.  She wants her private life to stay private.  When Philip breaks his promise, will it dash her dreams?

Based on Rome in Love by Anita Hughes, Rome is Love a sweet movie with some decent laughs (FTC Affiliate Disclaimer). But you just don’t make a connection to the main characters.  You feel a bigger connection to the characters trying to keep Philip and Amelia together.  You will get an urge for ravioli and espresso but none for the couple.  Watch this movie if you need to kill 2 hours or just read the book.

My instincts are never wrong – Dominic

Senorita, it was a pleasure drawing your bath today – Philip

Not something more, something unfamiliar – Amelia

No, I don’t think you do – Katherine

Amelia, we do not apologize for insisting our work should be respected – Sophia