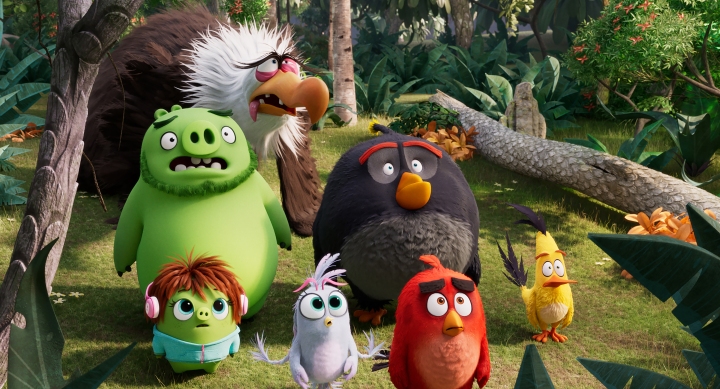 Red is the hero of Bird Island.  Schools teach classes about him, he has billboards, and everyone wants to be his friend.  A far cry from his past life as a loner.  Leonard and the pigs at Piggy Island still attack the birds but Red, Bomb, and Chuck are ready to fight back.  One day, the Pigs are attacked from another direction.  They send drones to check and discover another island, a frozen island.  Leonard decides to call a truce with the birds and work together to stop a new enemy from throwing frozen ice.  Red fears a truce because he won’t be seen as the hero.  He worries he will go back to being an unliked loner.  He decides to ignore the truce and keep an eye out for the pigs.  Soon, Leonard is on his doorstep asking for a truce face-to-face.  They get a crew together to fight the third island but this rivalry started long before them … in the 90s.

This movie has quick laughs for kids and nostalgia for the parents.  With butt jokes, break dancing, and quid-pro-quo battles, your kids will be entertained.  Parents will get Dawson’s Creek references, “Flockbuster”, pagers, and 80s & 90s music galore.  While this movie attempts to cater to adults and children, you never really laugh out loud.  It’s more of a quiet chuckle.  The storyline goes from teamwork to bitter exes to a Lifetime-style reveal.  The overall plot is forgettable but mildly enjoyable at the moment.  It isn’t an approvement on The Angry Birds Movie but it isn’t worse either (FTC Affiliate Disclaimer).  If you have kids, see the matinee.  Otherwise, wait for Netflix.

You mess with the hatchlings, you get the cannonball – Red

This may pinch a little – Leonard

I don’t need luck, I have a formula – Sliver