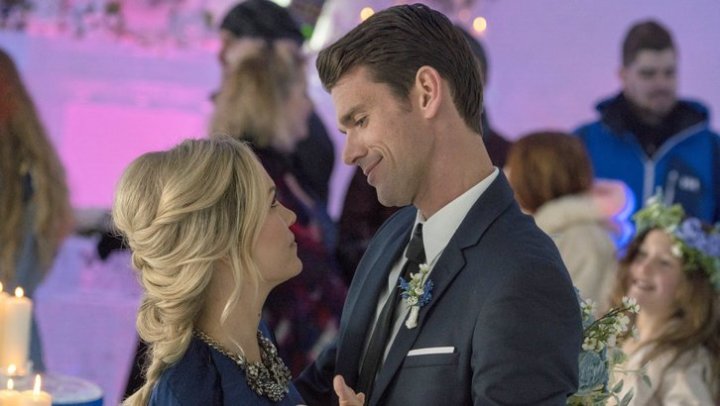 Jenny’s spirits are lifted when she hears about her sister Megan’s engagement.  However, the 4 weeks to plan the wedding has the family awestruck.  While a bit rushed, Megan’s goals are possible because she and her fiance Tony decided to have a destination wedding.  Mentally, Jenny starts packing her bathing suit when Megan drops another surprise.  They are getting married at the Ice Hotel.  The hotel is freshly built of ice and snow every year with themed rooms.  Jenny is happy with Megan’s choice when she sees the hotel.  It is magical with sculptures, drinks, and a slide.  Jenny sees a handsome man playing with a little girl.  After a brief conversation, Craig introduces his daughter Sara and his status as the best man.  Jenny remembers the name because he’s the guy Megan wanted her to meet.  Craig is a widower, father of one.   The instant connection is derailed because unknown to Megan, Craig brought a plus one: Lana.

This movie is quickly outdone by the hotel.  It is absolutely stunning.  While you will want to visit, you will also get a chill.  Putting that aside.  Another strong aspect of the movie is Sarah. From the mouths of babes, this young girl always speaks the unconscious truth to her father.  Without it, he would never understand how he truly feels.  This is one to watch with something warm to drink and a blanket nearby.

That’s what I love about you. You never really give up – Megan

I gotta say, I love this enthusiasm – Craig

Well, it’s not a chore when you really care about somebody – Lana

Sarah wakes up from an accident with her baby missing from her womb.  Nurses tell Sarah she was badly hurt in the car accident but her baby Lillian was delivered without incident.  They induced labor and, after the birth, Lilly’s father Travis took her home.  Sarah calls her husband and hears his mother Virginia and friend Jessica in the background.  She starts to question Travis and his motives for taking the baby.  She discovers that Travis moved 3 hours away to Virginia’s place.  Travis needed help but her family was much closer to Sarah’s home and willing to help.  She assumes Travis is having an affair with Jessica and demands Travis bring Lillian back home.  Travis tries but his car doesn’t work.  Once he gets roadside assistants, police to his door.  They arrest him for Sarah’s attempted murder.  They have proof her accident was done maliciously and his car can be linked to the crime.  However, they have proof he was in another place during the attack, but they suspect he had help.  When Travis tells his tale, a trail of dead bodies will be left behind.  Will Lilly and Sarah be among them?

This movie adds a bit of mystery to a kidnapping story.  You don’t know who the mastermind is for the first 30 minutes.  But as personalities develop you can determine the alpha.  Travis, Jessica, and Virginia all have a reason to want Lilly but only one would kill for something more.  Unlike most Lifetime movies, they don’t make the villain more likable than the protagonist.  You actually want to see the bad guy lose.  This is definitely a great start to the Lifetime movie season.

We didn’t do all of this to get nowhere – Jessica

I need to go home to my baby now – Sarah

Rachel is chaperoning a school field trip to the zoo, much to her daughter Lindsey’s chagrin.  Rachel takes a second to help a hurt child but when she goes back, her daughter is missing.  She runs to look for Lindsey and sees a masked man pushing her into a van.  She tries to run after it but can’t keep up.  Then, Rachel gets a phone call.  The kidnapper tells her to do everything he says or her daughter will be dead.  And to make sure she complies, he tells her to put in an earpiece and a hat fashioned with cameras.  After the first few obstacles, the kidnapper finally reveals himself.  This reveal only makes matters worst.  Rachel knows how dangerous and angry Lindsey’s kidnapper is for her past misgivings.  She must get her daughter back alive at any cost.

This movie is high energy in the first 5 minutes.  With a consistent ticking clock, you can feel Rachel’s panic.  When you learn the motives of the kidnapper, don’t give up on this film.  While the who is a typical Lifetime troupe, it’s his actions that will make your flesh crawl.  And to make this movie even more tantalizing, you have the constant surveillance.  So calling the police, sending warnings on a note, or sign language can’t be used to help.  Lifetimers often yell this at the screen for other Lifetime and LMN movies.  You become fully engaged in the ‘what if’ aspect of the movie.  So put the kids to bed, then watch with the lights on.

Just trust your instincts. Use the force, mom – Lindsey

There’s nothing wrong with you – Frank

I had to do the right thing – Rachel

Get up on that bar – Carter

Amber is excited to meet and to become engaged to the man of her dreams Luke.  She even gets along with her mother-in-law Jill.  The two have planned the engagement party, wedding, and reception together.   Amber calls her mom Sharon to tell her the news of the engagement with pure excitement.  Once her mother Sharon joins them in Boston, Amber is on eggshells.  Sharon is upset that she has been left out of the planning and the direction of the wedding.  Sharon feels Jill is trying to steal her daughter.   Sharon will do anything to get her daughter back, including torture, injury, and imprisonment.

This movie doesn’t take long to ramp of the psycho and it does it in the best way.  While Sharon is a bad guy, you understand she is being pushed to the edge by Jill repeatedly.   This exchange between the two women makes you have some compassion for Sharon.  You almost forget she is an angel of death.  This movie is a mix of Monster-In-Law and Misery in all the best ways (FTC Affiliate Disclaimer).  Record this so you can watch it twice.

Well, I like to think of myself as a high-end hoarder – Jill

Well, that was awkward – Amber

The Wrong Teacher: Back To School – Review

The Wrong Teacher: Back To School – LMN – 2 hours and 0 minutes

Chris sees the woman of his dreams in a bookstore.  He makes his approach with stealth and charm.  Charlotte can see he is young but she is easily faltered by his maturity and intelligence.  Charlotte is a teacher and future author.  Chris ask her out later that night and it ended with them having sex on her work desk.  The next week, he goes to her job and makes a request.  Not to become a teacher, but her student.  Chris never told Charlotte that he was 18 years old and her student.  He doesn’t see the big deal because he is legal.  But Charlotte still walks away out of fear of losing her job and book deal.  She doesn’t know that Chris has photos and video of their night together.  He will do anything to anyone to get her back, including Charlotte.

An alternate ending to The Wrong Teacher, is more like an extended ending.  But the extension provides a better jaw-dropping moment than the original.  It’s worth the extra 30 seconds.  And Charlotte is just as annoying in this version as she was in the first.  So, watch it for Lee and Lydia.  So if you have a choice between the original or the extended, choose the extended.

Careful What You Wish For – Review

Careful What You Wish For – LMN – 2 hours and 0 minutes 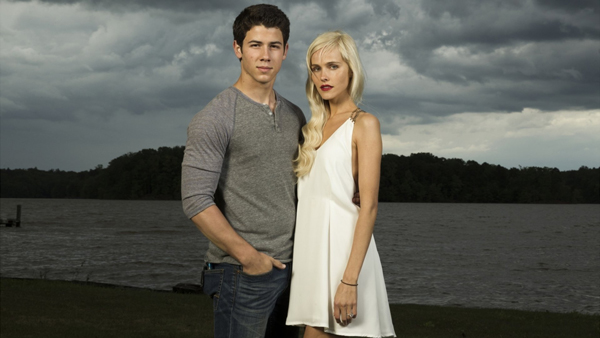 Doug and his family go to Lure Lake every summer.  His parents worry he will spend most of the summer with his head in a book but his best friend Carson has other plans.  Carson is a big flirt and wants Doug to be his wingman.  Doug looks out the window and sees the new neighbors moving into the house next door.  He can’t take his eyes off of the wife Lena.   Elliot introduces himself to Doug and as the two men talk, Elliot offers him a ‘tryout’ to fix his boat.  If he does well, Elliot will pay him.  A few days later, Doug helps Lena get into her home which causes him to cut himself.   She cleans his cut.  In a few moments, the two are having an affair.  This affair runs hot and heavy until Doug gets a call from Lena.  When he runs to check on her, he sees Elliot dead on the floor.  She tells Doug that he attacked her and she hit him in the head.  After some deliberation, Doug comes up with a plan.  He puts on Elliot’s clothes, grabs Elliot’s body, and gets on the boat.   He drives farther out onto the lake and burns Elliot’s body.  Doug and Lena believe they are ok.  Then the insurance investigator comes and people around town are starting to whisper murder.   Will they discover what Doug and Lena did?

Yes, you have seen the set up before.  No, you have no clue how it will end.  You will have an urge to watch this movie twice after the recap of all the clues you missed.  And Doug’s epiphany at the end is honest to his core.  Even with hindsight, he believes he would still do the same thing again.  And this is not the typical Lifetime movie because the cops aren’t dumb.  They are fun but not dumb.   Get your popcorn, tea, and set the DVR for another go.

How about we tag team her – Elliot

When you’re young, you don’t realize the permanence of your decision – Lena

Dr. Katie Jones is a successful plastic surgent.  She is working overtime because her husband Chris had a seizure that affects his ability to perform surgeries.  She meets with a patient named Elizabeth.  Referred by a well-known doctor who is a friend to Katie, Elizabeth has had some work done.  Normally, Katie would say no but the referral eases her mind into performing a few tweaks to Elizabeth’s work.  During the consultation, Elizabeth reveals that they knew each other in med school.  Katie takes a closer look and recognizes Elizabeth as the mousy, homely, bookworm that never finished.  Elizabeth changed majors and is a successful lawyer.  Katie is happy for Elizabeth’s new found confidence and physical changes.  Weeks later in a post-op exam, Elizabeth starts to admire Katie’s features and gets too close.  Dr. Katie tells Elizabeth she will no longer do any more work for her.  Elizabeth decides to make her pay.  Not just for now but for their past as well.

This movie keeps the creepy dial set to 10.  It’s easy to label Elizabeth as crazy, she truly has Body Dysmorphic Disorder.  She sees flaws that aren’t real.  Also, she attributes her failure to everyone else in her life instead of herself.  She uses the legal system and public opinion to get her way.  At one point, Katie has the option to tip the scales in her favor but decides not to take the easy way out.  This is true class.  These two strong deadly women are a dynamic and enjoyable force to watch on the screen.

People do usually change that much – Katie

Are you kidding? That woman is toxic – Bruce