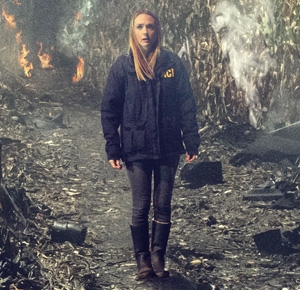 Sophia, a Flight Activities Control Board investigator with a severe fear of flying, attends a support group before her first flight with her brother, Shane. Just before the plane starts to taxi the runway, she panics and leave her brother on the plane. Later, she learns that the plane crashed and her brother died. She wants to be a part investigation, but her boss reminds her she is on forced leave. Also, you can’t investigate crimes that involve your immediate family. Sophia ignores her boss and investigates the flight crew, the passengers, and her co-workers. Everyone believes the crash was a technical error, but Sophia will not let it go. These are the same actions that lead to Sophia’s forced leave. Sophia believes there is more to the crash than meets the eye. Who is right? Can Sophia be stopped? Will she find out what happened to the plane?

This movie isn’t not the nail bitter it’s hyped to be in the promos. It’s a LMN movie so you know how it will play out. It sucks that the protagonist is made to look crazy for following her intuition. You start getting annoyed with people saying “Let it go”, “Just let us do the work”, and “You need to calm down”. This movie isn’t bad for “I got a few hours to kill” or “my favorite show is on repeat to night” but don’t reschedule to watch … wait for a repeat … in the afternoon … on as Sunday

Now let me see you strut. Come on. I’m bring you to my premiere. You’re my beard – Shane

Good, me too – Sophia

Get me his job – Sophia