Before Tess’s college freshman orientation, she notices someone is following her.  She hides in the bathroom.  Once she hears the footsteps leave, she exits the stall.  A figure in a hoodie jumps up and tells her not to scream.  The person takes off the hood and Tess sees her face looking back at her.  Sammy introduces herself.  Years ago, Mitch and Kim adopted Sammy because they only wanted one child.  Days later, Patricia adopted Tess.  However, Patricia was never told Tess was a twin.  Sammy and Tess sit and get to know each other.  Sammy invites Tess to stay the night at her parents’ mansion.  Tess wakes to her clothes missing and a note from Sammy.  Sammy decided to switch places to help Tess with her Spanish exam.  She tells Tess to enjoy the switch and be the best Sammy she can be.  Damon sees Tess and starts to kiss her.  As he makes breakfast, she doesn’t tell Damon she is not Sammy.  Then he sees the housekeepers approaching.  He tells Tess to get rid of them.  She tries but she just can’t keep them out.  Soon, one of the housekeepers makes a blood-curdling scream.  They found Sammy’s parents dead inside the home.  Tess can’t believe it.  The police come to investigate.  Tess tries to explain that she is not Sammy.   However, they can’t find the note Sammy left her.  So, they call Patricia.  Patricia says her daughter Tess is with her.  Tess tells the officers that Sammy is with her mother.  So, they make an appointment to meet Patricia in person.  When Patricia and Sammy, posing as Tess, denied they knew about the twin, Tess knows her mom is in danger.  Tess will do anything to save her mom and Sammy will do anything to stay out of jail.  Who will prevail?

While the ending is a bit sappy, kudos for having intelligent cops in a Lifetime movie.  These cops don’t take things at face value and work their investigation.  Lorynn York did a great job of making Sammy and Tess different.  She changed her voice pattern, her walk, and her glare to keep the characters divergent.  Special effects and a body double allowed their interactions to be coherent.  This allows the twin plot to be more palatable for the audience.  And the gun standoff was everything you didn’t know you wanted.

It’s ok. Try not to freak out. I just want to show you something – Sammy

I don’t have a sister – Tess

Basketball County: In the Water – Review

Basketball County: In the Water – Showtime – 1 hour and 0 minutes

Prince George’s County, Maryland is the heartbeat of the state.  Right outside of Washington, DC it’s separated by the Capital Beltway.  However, basketball brings it all together.  With 30 NBA players, scores of WNBA players, and countless NCAA players, some believe there is something in the water.  This documentary follows basketball’s start from James Naismith’s invention of the game to Dr. Edwin Henderson bringing it to DC.  After the DC riots, many of the affluent African Americans left DC and set up communities to Prince George’s County.  There, the love of basketball was nurtured by the best park system in the nation.  Then DeMatha’s newly appointed coach, Morgan Wooten, made a revolutionary decision to integrate his team and create one of the best high school programs to date.  As you watch, you will see how indoor basketball courts, Go-Go, trials and tribulations, and the prodigal son made P.G. County the Mecca a basketball.

Disclaimer, this reviewer is from P.G. County – as the locals call it – so the story of basketball and the county is deeply personal.  With that taken care of, let’s get to the review.  This documentary is a heartfelt and honest look at the county and how it quickly recognized the important role basketball plays to the community’s youth.  The county has built countless basketball courts and community centers to protect the youth from the ails of the community.  As players make it to the pinnacle of their success, they reach back and help up-and-coming players, as well as their community.  This is a story of P.G.’s love of basketball.  Also, its basketball’s love letter to the county that has given so much greatness to the game.  You will wish it was longer.

Its the Mecca of basketball – Marissa Coleman

It’s in the water – Kevin Durant

So if you lose and you not good, they might say you not playing no more – Dermarr Johnson

I recruit all over the country, the players in PG county are 2nd to none – Brenda Frese

He belongs to everybody – Lamman Rucker

Engaged to a Psycho – Review 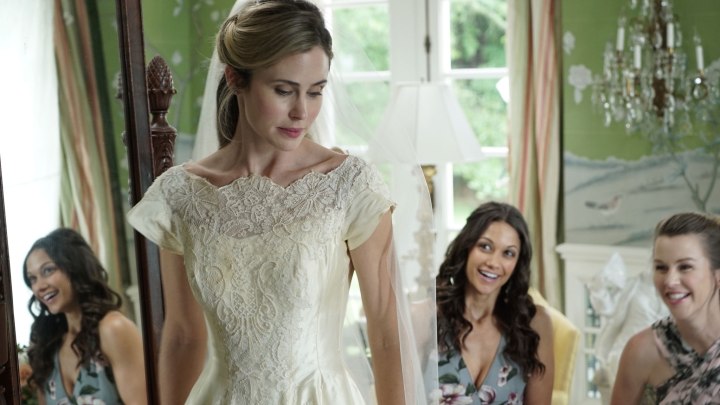 Deanna’s boyfriend, Karl, has given her three big surprises.  First, he asked her to marry him.  Second, he bought her dream house.  Third, he wants to get married next Sunday on his parent’s estate in Kentucky.  This will be the first time Deanna has met Karl’s family.  Karl’s mother, Ivy, is happy to see Deanna but doesn’t approve of her job as a pre-made meal chef.  Karl’s sister, Ruby, welcomes her first and new sister to the family.  Next, Deanna is introduced to the house staff.  Sebastian is the chef, Chandler is the house manager, and Jimmy is the groundskeeper.   While things got off to a rough start, Deanna is ready for the cake testing.  Until she has a severe allergic reaction.  She is saved when Jimmy finds her Epipens in the trash.  Ivy warned Sebastian of Deanna’s coconut allergy, so Karl wants to fire him.  When they find Sebastian, he is dead.  Due to the unforeseen tragedy, Ivy decides to hire a wedding planner.  It’s Karl’s high school sweetheart Sienna.  Deanna can’t take any more surprises and goes from a run.  She discovers an old shed with the names Karl and Nicole carved into the wood.  Karl tells Deanna his ex-fiance, Nicole, died in that shed in an accidental fire.  Deanna knows something sinister is happening.  But who is causing it?  Is it Karl? The man with one lost love.  Ivy? The mother who wants to keep her babies around.  Ruby? The sister that feels a little too close.  Sienna? The ex who loves the family.  Or Jimmy? The man with a dark history rooted in the family.  With a ring, a railing, and a text message, more bodies will fall and the truth will come to light.

For a Lifetime movie, they did a pretty good job of keeping the mystery of the psycho’s identity a secret until the last 30 minutes of the film.  You assume it will be Karl because of the title … and it’s a Lifetime movie.  As the plot thickens, bodies drop, and items go missing, you will look at the other members of the family.   Through it all, Deanna maintains her composure without being complicit.  She stands up for her wedding choices and her belief something is wrong.  As Karl tries to calm her down, she stands her ground.  This movie is an intriguing watch.

Will you marry me? Even though it’s crazy – Karl

Honey, you don’t have to be perfect.  Just honest. – Deanna

Andy leaves his war correspondent duties and heads home to visit his mom’s Forest Cove B&B.  Before he arrives, his friend tells him the B&B is falling apart.  His mother, Helen, could not afford to pay the handyman, so he left.  Now everything is falling apart and needs to be fixed.  After Andy fixes a few items, he finds overdue bills Helen hid in a dresser drawer.  It’s worst than he could have imagined.  Without enough revenue, she won’t be able to pay the electric bill, let alone the fixes.  Producer Diane travels to the Shangri-La resort to prep for the Jaunts with Jared TV show.  She tries to make a U-turn and gets her car stuck in the dirt.  She walks to the nearest sign of civilization, Forest Cove.  Helen sees the sad, soaking wet Diane and allows her to stay the night for free.  Won over by her hospitality and hot cocoa, Diane fires up her laptop and starts writing.  Only Diane’s best friend, Gina, knows Diane is the woman behind the blog, E-Dining with Edina.  She has 50,000 followers and it’s growing in popularity every day.  When Jared, the host and Diane’s ex-boyfriend, calls for a new live show idea, Diana pitches Forest Cove instead of Shangri-La.  She tells him it’s rundown but quaint.  He says yes.  However, he wants to destroy the B&B live on air to get higher ratings.  Gina overhears his plans and warns Diane.  When Jared comes to town, she makes Jared an offer.  If she can fix a list of problems, he will give the hotel a nice review.  Well, at least that’s what he says.  While Diane works with Andy to get the fixes done, she doesn’t know that he is planning to sell the B&B.  Can Diane change Andy and Jared’s heart about the Forest Cove B&B?

This movie is background noise.  The premise, subplots, and conclusions have all been done.  This movie is 3 Hallmark movies in one.  You can watch the first 20 minutes and the last 30, then still understand everything that happened in between.  The most watchable aspects are Jared’s snarky remarks and Helen’s love life evolving.  Everything else can be skipped about this movie.

I got a lot of reservations – Andy

What you do? Run out of duck tape – Charles

Nothing beats hot chocolate on a stormy night. Unless someone is bringing it to your door – Diane

I think you’re really finding something inside.  Keep looking – Helen