Who Stole My Daughter – Review

Who Stole My Daughter – LMN – 2 hours and 0 minutes

Five years ago,12-year-old Katie Sullivan went missing during a time capsule deployment at her school.  While search teams tried to find her, a body was found.  They determined it wasn’t Katie.  It was a pregnant woman burned beyond recognition with her teeth missing.  To this day, detectives still can’t identify her.  Now Katie’s parents, Janet & Tim are in different places in their marriage.  Janet still studies videos of the day Katie went missing.  Tim wants to move so they can move on.  After a heated exchange, Tim goes to bed and Janet looks through more film.  A knock at the door startles Janet.  It’s a parasite reporter wanting to have an interview on the 5th anniversary of Katie’s disappearance.   Janet slams the door in her face.  Before Janet can sit down, another knock is at the door.  She opens it, expecting the report, as sees a teen girl with bright red hair.  Janet sees the girl’s face and knows its Katie.  She screams for Tim.  They decide to let Katie sleep and hold off calling the cops.  No matter how hard they try, they can’t get her to speak.  Katie is holding a dark secret and everything comes down to a videotape.

Every moment, every line, or every gesture is a clue in this movie.  There is no wasted second.  So when everything being a clue, you have to pay attention to unlock the crime.  Sierra McCormick did an amazing job playing the emotionally traumatized Katie.  As she curls into a ball of protection and hides in her bedroom, you want to hug her.  She is keeping her pain so locked within, you are drawn to watch her unlock it.  This movie has a slow build, but it’s all necessary.  The last 30 minutes go at an extremely fast pace.  Hang in there for a very strong yet satisfying payoff.

This is because you’re addicted to it – Tim 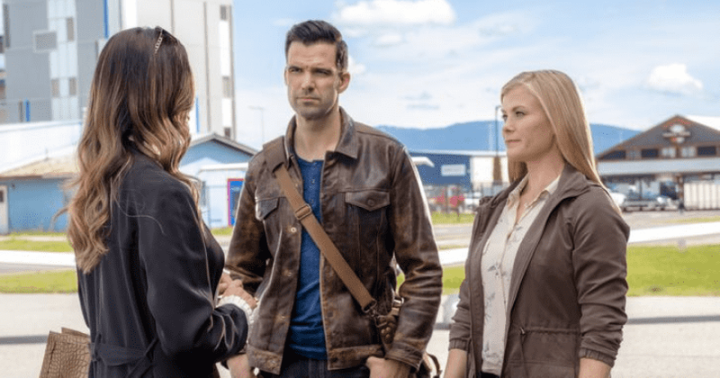 So here’s what we know, Alex’s best friend Katie is defending Stephanie.  Stephanie is on trial for her estranged husband, Elliot’s murder.  He was found, face down, in the pond behind his house with a large gash in his head.  Elliot’s body was discovered after his best friend Jeremy and Elliot’s neighbor, Leonard.  Over the years, Leonard and Elliot had property disputes but Leonard was alibied by his wife for the time of the murder.  Leonard reported seeing Stephanie come to the house to pick up the couple’s children after Elliot’s weekend visit.  Leonard heard the two arguing and Stephanie left.  Stephanie admitted to the police that she and Elliot were arguing over a woman named Claire.  Police arrested Stephanie.  They deduced she went into a jealous rage, killed Elliot, and put his body in the pond.  Although the evidence is circumstantial, Katie fears this story is believable and her client will be sent away for life.  She wants Alex to use her podcast to find Claire.  If Katie can find Claire, she can question Claire about the nature of her relationship with Elliot.  With so little time before Stephanie’s conviction, Alex needs a few things to solve the case: her team, her podcast, a murder board, and $5,000.

Be prepared to watch this latest episode twice.  The latest in the Chronicle series gives you the thrill of planes, secret storage lockers, and underground poker games.  Unlike the past, this episode focuses more on the case and less on the individual relationships of the cast.  You get a hint of the father-daughter bond between Drew and Kendall.  As well as the budding romance between Alex and Drew.  Since the characters are well established, the plot is focused on the case itself.  As cases get more personal, stronger and more complex bonds will be written.

Does he have a book of bad dad jokes – Alex

But I know my kids, they don’t lie – Stephanie

No photos. People are watching – Drew

What happened to not judging a book by its cover – Kendall

Hitsville: The Making of Motown – Review

Hitsville: The Making of Motown – Showtime – 2 hours and 0 minutes

Berry Gordy learned the power of perception while selling newspapers in his youth.  He learned the importance of customer service after his record store failed.  He learned the importance of manufacturing while working at Ford Motors.  His family ensured he knew the importance of being self-sufficient.  They owned a grocery store and created a bank within the family.  Berry, a songwriter in his own right, went to his sister to borrow $1000 from the family bank to start a record company.  She loaned him $800.  Berry created a Motown Assembly line for artists (FTC Affiliate Disclaimer).  First, they found the talent. Next, they wrote the perfect song.  Finally, as the artists were going through artist development, their music was going through quality control.  Berry created a winning formula that cultivated stars with a signature sound that spanned the globe.  Even with a winning formula, Berry knows either you innovate or become stagnant.  Motown will have to survive through Jim Crow South, Berry in Hollywood, and artists becoming political to become a historical stand out company.

Dare you to watch this movie without singing along.  As Berry and Smokey walk you through Hitsville (now the Motown Museum), they reminisce on how Motown started, its impacts on American culture, and the amount of genius it nurtured throughout the years (FTC Affiliate Disclaimer).  While the best friends talk, they make and settle a $100 bet about I Heard It Through the Grapevine (Gladys Knight and the Pips or Marvin Gaye).  Business partners and artist talk about the equality within Motown despite push back for the white and black communities.  No matter how big of a Motown fan you are, you will learn something about this important legacy in American culture.

We have to maintain our high standards – Berry Gordy

Wait a minute man. I will find the record. You just drive – Smokey Robinson

That’s fantastic because I don’t eat them – Barney Ales

Tia spent 2 and a half years arguing a case and won her clients a $12 million settlement.  Her father tells her she is on the shortlist to become a partner in the firm.  Also, the partners want her to start looking into the next case.  Tia stops her father dead in his tracks.  She is experiencing burn out and wants to take a break.  He tells her to take a few weeks to clear her head and come back.  Later, she gets a call from her Uncle Roland.  He has decided to open a restaurant on a boat.  The boat will sail around while people enjoy 5-star French cuisine. Roland called Tia because he is having a legal issue with the boat lease and he wants to send the lease to her so she can look it over.  She decides to do him one better.  She will come down to visit and look at the document as well as his boat.  He enthusiastically accepts.  After seeing the Pacific Yellowfin boat, Tia’s original passion starts to rise again.  Years ago, Tia wanted to sail but she gave that dream up after she was accepted to law school.  Now, Roland finds out his captain declined the job on the Pacific Yellowfin for a bigger company.  Tia jumps at the chance to sail but only until Roland finds a replacement.  Roland is happy to have her on the team.  Tia is on cloud 9 until she runs into her ex-boyfriend, Jake, in the park.  Twelve years ago, he broke up with her because she wasn’t following her passion like they promised they would.  So with no hope of a long-distance relationship working, Tia when to law school and Jake with to culinary school in France. Tia’s heart is still broken.  Tia has no idea Jake accepted Roland’s job offer as a chef for De Mers, the restaurant on the Pacific Yellowfin.  The two exes are forced to work together.  What could go wrong? What could go right?

Based on All Summer Long by Melody Carlson, this movie follows the format of exes working together to realizes their spark is still lit (FTC Affiliate Disclaimer). While the movie does create new business drama, it still doesn’t grab your attention.  This movie is breaking the pattern of women given up careers for love.  It clearly states that Tia has always wanted to sail.  She gave up sailing for a more stable and practical career.   If you are a fan of this Hallmark format, sit and enjoy.  Otherwise, wait for a rainy day.

It wasn’t a compliment – Tia

I think she likes it – Roland

I’ve been mistaken for the deckhand before. So, Captain is a promotion – Bennet