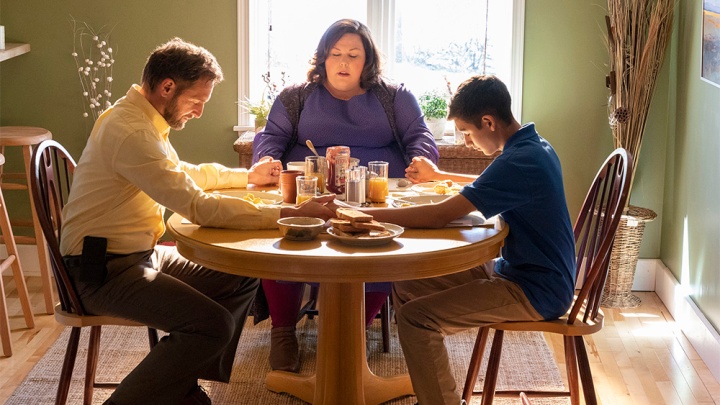 Joyce and Brian Smith adopted John when he was 9 months old from Guatemala. Every year, around his birthday, he struggles with feelings of abandonment. These feelings cause him to withdraw from his parents and act out in class. His mother and father continue to love and support him through this difficult time. On Martin Luther King, Jr. Day, John along with his 2 friends, both named Josh, gallivant around town. They see the lake is frozen over. They throw a rock to test it and the ice doesn’t break. So they start to play on the lake. A restaurateur warns the boys to get off the ice but they stay and take pictures.  In a flash, all three boys were under water.  At first, all 3 made it to the surface, but when John tried to help one of his friends, John was accidentally kicked in the face and knocked out.  He fell into the icy water.  Rescue crews came and save the two Joshes but they can’t find John.  Tommy, a firefighter, believes John is dead and starts to leave the lake.  Then he hears a voice (believed to be his captain) tell him to go back.  In seconds, he finds John and pulls him to the surface.  John doesn’t have a pulse and wasn’t breathing.  But the paramedics and nurses worked for another 25 minutes.  As Joyce walked into the hospital room, the doctor asked Nurse Keith to stop compression and they give her a moment for her last goodbyes.  She desperately pleads for God to save her son.   Then, there is a heartbeat.  After 45 minutes without breathing, a pulse, and 88-degree temperature, John is breathing.  They medivac him to the nearest hospital with an expert in the field.  The expert doesn’t believe John will make it through the night, but Joyce knows it’s not up to doctors to save her son. It is God’s decision.

Based on The Impossible: The Miraculous Story of a Mother’s Faith and Her Childs’s Resurrection by Joyce Smith with Ginger Kolbaba, this movie will bring a tear to everyone’s eye (FTC Affiliate Disclaimer).  This movie is based on a town’s faith, but there is so much more to this story.  It deals with John’s struggles after his ordeal and the struggle his accident caused in his family.  In addition, this tragedy fixed a ripple in their church between the new pastor and Joyce. This film was gutwrenchingly honest for each character.  Joyce stated all her faults in prayer for the world to see.  Then, made a conscious decision to change her life and how she treated others.  While it’s hard to believe miracles can happen, John is walking proof that blind faith can go a long way.  This movie is for the whole family and great for any season.

Tessa is ready to start her first year in college and in the dorms.  Her mother, Carol, and boyfriend, Noah, are happy to drive and help her unpack.  When Tessa’s mother sees her new roommate, she turns on her heel, leaves the room, and starts making demands for a room change.  Tessa stops her mom and tells her she can handle Steph.  College is all about learning and adjusting.  Steph will be Tessa’s first attempt to go out in the world on her own.  Her other relents and drives away with Noah.  The first few days of college go as planned.  Tessa goes to her classes, studies, and meets new people.  After showering, Tessa meets Hardin, who is sitting in her bedroom unannounced.  She asks him to leave several times but he won’t.  Moments later, Steph walks in and introduces them.  Steph invites Tessa to a party and Hardin laughs.  He says she isn’t a party girl.  Tessa decides to attend one party and plays truth or dare.  After refusing to answer a truth question, Tessa takes a dare.  She is dared to make out with Hardin.  She turns him down and walks away.  She retreats to the bedrooms, only to find herself in Hardin’s bedroom.  Sparks fly but she pulls away after remembering she has a boyfriend.  The sparks will not only bring romance, but they will also bring a strength in Tessa she never knew she had.

From the best-seller After by Anna Todd, this is the typical romance we come to expect from teen movies (FTC Affiliate Disclaimer).  The complicated, unattainable guy constantly runs from the virgin, sweet-natured girl.  She changes her life completely and he continually talks about not wanting to talk about his problem.  While this movie does mention classics like Wuthering Heights, Pride & Prejudice, and The Great Gatsby, it just falls into the same teen angst tropes.  Since this movie is book one of a 4 book series, the ending is a cliff hanger.  If you are a teen (14+), this is a good movie to see at matinee price.  Otherwise, wait for FandangoNow.

How much did I freak your mom out? – Steph

I’m disappointed in you – Noah

Sir Lionel Frost continues searching for mythical creatures from all over the world.  After losing another assistant, Sir Lionel goes through is letters for his next adventure.  One letter offers to lead him to a Sasquatch.  When Sir Lionel compares this letter to other evidence he has collected over the years, he believes the letter is authentic.  He hopes the discovery of this creature will allow him acceptance into the Society of Great Men.  The leader, Lord Piggot-Dunceby laughs at Sir Lionel and tells him he will never have a place in their group.  Sir Lionel makes a deal.  If he brings proof of the Sasquatch they have to let him in.  If he doesn’t, he will stop trying to become a member of their social club.  Lord Piggot-Dunceby agrees.  Sir Lionel goes on his quest and finds so much more than an average Sasquatch.  He finds a highly intelligent creature with good grooming and a sense of humor.  The Sasquatch is the last of his kind and his lonely.  He wrote to Sir Lionel with the hope that Sir Lionel can lead him to the Himalayas to find is cousins: The Yetis.  He hopes to be with more creatures just like him.  Sir Lionel agrees to take him if the Sasquatch gives him proof of his existence.  The Sasquatch agrees and the two are on their way.  However, Sir Lionel doesn’t see Lord Piggot-Dunceby’s henchmen, Mr. Stenk, in the shadows.  Lord Piggot-Dunceby is desperate to win and he will kill to do it.

This movie has a great 10 minutes at the beginning and a decent last 15 minutes in the end.  Everything else is a bore.  It tries to pack in life lessons to children about acceptance, differences, self-love, discovery, science, and the environment in less than 2 hours.  The funniest scenes are in the trailer. If you do plan on seeing this movie, some younger children may have a problem with the opening sequence.  It has a Jurassic Park moment but the person lives. Otherwise, wait for cable.

It’s not about a paycheck – Mr. Stenk

I mean, she has a point – Adelina