I Am Somebody’s Child: The Regina Louise Story – Review

I Am Somebody’s Child: The Regina Louise Story – Lifetime – 2 hours and 3 minutes

Jeanne “Ms. Happy Trails” Kerr wakes up the girls in the Lewis Children’s Shelter every morning and puts them to bed every night.  One day, Regina Louise enters the doors.  She walked up to a police officer and asked for a place to stay.  At 14, she was placed in the shelter.  Ms. Kerr puts her valuables in a locker, including a napkin will lipstick from her mother’s last kiss.  Then, she catalogs Regina’s numerous injuries and scars.  When questioned, Regina gets defensive or makes up stories about the injuries, but Ms. Kerr knows the truth.  It breaks her heart to see Regina left behind as other girls are picked up by their parents or future adoptive parents.  So Ms. Kerr spends one-on-one time with Regina.  The two form a deep connection.  That bond is solidified when Regina is abandoned by her mother and father, making her a ward of the state.  Regina curls in a ball and Ms. Kerr sits by her side, holds her, and continues to tell her she is special.  The two spend Christmas together and Ms. Kerr decides to adopt Regina.  The Shelter’s director Ms. Ford strongly objects to the adoption.  She doesn’t believe Ms. Kerr – a white woman – can raise a black child.  She worries Regina is having an identity crisis.  Ms. Ford makes Ms. Kerr take a week off to sever their bond and Regina is placed in a family with 3 adopted sons.  Regina runs away and informs Ms. Kerr one of the sons tried to rape her.  Ms. Ford believes Ms. Kerr is the problem. And informs her that if she goes along with the adoption, she will be fired.  Ms. Kerr quits.  At the adoption hearing, the judge rejects Ms. Kerr’s petition to adopt and Ms. Ford recommends that Regina is placed in Riverways Treatment Center – a psychiatric facility.  However, through medication, lies, abuse, and misdiagnosis the bond between the two holds strong but can they ever find each other again.

Based on Regina’s Memoir, Somebody’s Someone, this movie displays the horrors of the foster system as well as the misconceptions about children in the system (FTC Affiliate Disclaimer).  Often, these children are abused and ignored.  Then others wonder why they lash out.  Before any outburst, Regina actions are explained to the viewer.  Since you know the cause of her anger, it is disturbing to see how she is treated when she reacts.   This child didn’t need ‘discipline’, she needed guidance.  It was one woman’s words that kept her going and alive.  This movie will open your heart to the possibility of adopting or becoming a foster parent.

Your goal here is to be a gold star girl – Ms. Ford

That, we do not know and I have sincere doubts – Sam

I promise to be good – Regina

I am not the right race but I am the right mother – Ms. Kerr

Erin loves her family candy company, Cavendish Homemade Chocolates, and heads the marketing department.  They create one of the kinds chocolates and each is created by hand.  However, they are being outsold by the competition ChocMate.  They are producing more products faster because of automation.  Erin’s brother, Carter wants their company to automate too.  More chocolate means more profits.  This change makes Erin uneasy.  She believes automation will dilute the core of their brand.  She jokes to her dad that he should go undercover as a factory worker and get their perspective of Carter’s idea.  He takes her joke seriously but he has been the public face for too long to go undercover.  On the other side, Erin has made a valiant effort to stay out of the limelight.  Since few people know her face, he tells her she should go undercover and get the workers’ perspective on automation.  Her father creates paperwork in order to hide her identity and sends her to the nearest factory.  On her first day, she learns that being on the ground floor is tough but the people love and have pride in their jobs.  One person that expresses a true passion for his job is Brian.  Brian has worked in the factory since a teen.  He met his late wife there and they had a daughter named Madison.  Since losing his wife, the factory is his passion.  He hates the new machines because they pick inferior cocoa beans for the chocolate and the create horrible baskets.  During a lunch break, Brian tells Erin (now calling herself Veronica) that upper management is clueless and doesn’t do the ‘real’ work.  Plus, several of his friends have lost their jobs because of the machines.  After a few bad encounters, Erin knows she rubbed Brian the wrong way.  As the two work together, they get closer.  They will work together to save the factory from automation and re-create a tradition that built the Cavendish brand.  Will Brian accept Erin when he learns she is upper management? Will Erin decided to stay or take the job in Chicago when her undercover boss work is complete?

While you see the writing on the wall for this couple, this movie’s supporting cast is amazing and extremely funny.  You will honestly laugh out loud at all their jokes and quips.  This movie takes a page from Undercover Boss and develops a character with strong ties to the company but a lack of understanding for its core (FTC Affiliate Disclaimer).  She makes mistakes with her attire and overall tasks.  However, she is respectful to everyone and what they do.  She discovers they all share her passion for keeping Cavendish homemade.  It’s Erin’s growth that will keep you watching.  And that gorgeous, giant, chocolate egg.

I don’t think he told her – Grant

Thank you … for telling me that – Erin

Maybe we just start you off with someone else. Something easier. Less messy – Flo

I thought of it, so it must be good – Susan 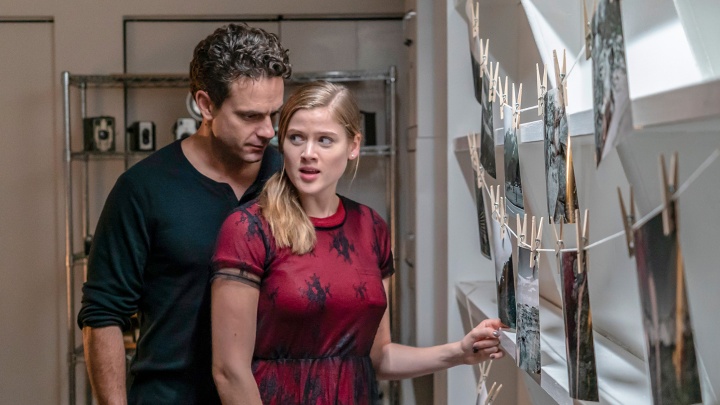 Ashley is ready to go to NYU for photography but worries about her mom.  Her father past away and her mother Tracy went into a depression.  Ashley fears her mother will only get worse while she attends college.  To help, she creates an online profile for Tracy, makes the profile live, and forgets about it.  In a coffee shop, Ashley runs into Jared a few days later.  He has qualities like her dad and mentions her mother favorite film, Sleepless in Seattle.  Ashley believes Tracy and Jared will be a good match.  However, her mother would never be ok with a blind date.  So, Ashley tells Jared to “bump into” Tracy and hopes things will happen organically.  However, a sweet setup becomes a whirlwind marriage that will leave Tracy sick, leave Ashley cutoff, and leave somebody dead.

Get ready to yell and throw things at your screen.  As you watch Tracy being manipulated, you wonder “what will it take for her got see the truth”.  Ashley’s character grows and becomes stronger with each challenge Jared lays in front of her. She even makes a gut-wrenching sacrifice to save her mother.  Don’t be too hard on Tracy.  Sadly mothers fall victim to this every day.

It’s my birthday. I can do what I want, right? – Ashley

I’m from the Sleepless in Seattle generation. I want to meet someone old school style – Tracy

Too many people in the world, I can be a little greedy sometimes – Jared

Billie is excited to have her former hostess Katie in town.  Katie landed the starring role for an upcoming TV show.  The show was based on books written by Derrick Kelso.  Derrick based the book on his mother’s real-life legal cases.  Hannah Kelso is proud of her son’s top-selling book, especially because he based them on her.  Meanwhile, she is furious that his writing has decreased because he started dating a “gold digger”.  The woman Hannah hates is Katie.  Hannah has looked into her background, had Katie followed by her right-hand Jerry, and tried to get her pulled from the show but nothing will work.  In order to help, Billie tells Katie to go to Hannah and offer an olive branch.  It seems like sound advice until it blows up in Billie’s face.  Feeling guilty, Billie goes to Hannah’s house to explain that she told Katie to confront her.  When Billie arrives she sees a shadowy figure run off and Jerry dead on the ground.  Billie is in a conundrum. As she investigates Jerry’s murder, all the evidence points to Katie.  Billie just doesn’t believe Katie could be a killer.  Can she prove it to Ian?

From the Morning Show Murders Novels, this movie must be DVR’ed so you can watch it multiple times (FTC Affiliate Disclaimer). Every word spoken in this movie is a clue to the motive and the killer.  There is a lot going with the plot and subplot; you will be totally engrossed each step of the way.  There are so many suspects and shady dealings, your head will be spinning will possibilities.  This installment in the series will be hard to top.  And fans will not be disappointed.

Ok, that’s 2 wonderful’s. I think your mentor needs to take a look at this guy – Billie

You have to believe me. I swear, I didn’t kill anyone – Katie