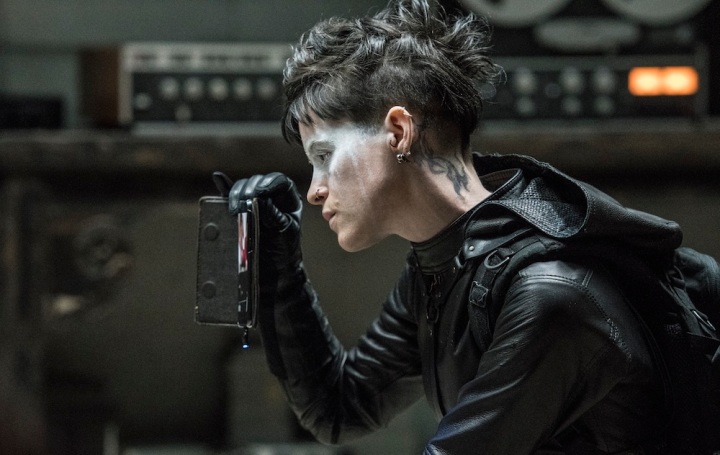 Since she was a little girl, Lizbeth could see the evil in others, especially her father.  One the verge of escape, she asked her sister Camilla to come with her.  Camilla didn’t.  Lizbeth fell off the balcony and rolled down the hill; never to come back.  Now, Lizbeth is known as the girl with the dragon tattoo.  She hurts men who hurt women and rights wrongs.  Lizbeth has been hired by Frans Balder to get back a program he created called Firefall. It can hack any missile in the world at the same time and give the user full access.  He was told he could keep control over the program but the US lied.  Frans feels he has created an abomination.  Lizbeth hacks into Edwin Neeham’s computer at the NSA and takes Firefall.  Later, several men break into her apartment and set off a bomb.  Lizbeth barely escapes with a picture of her assailants.  But when she doesn’t meet Frans at the drop-off point, he fears she has run off with Firefall and reports her to the SÄPO.  The SÄPO put Frans and his son August in protective custody.  Lizbeth knows the SÄPO will not be able to protect them and Edwin is coming for her.  She must save Frans and August before the SÄPO, Edwin, and her past come to destroy her.

Based on The Girl in the Spider’s Web by David Lagercrantz, this movie is a sequel to the cult classic The Girl with the Dragon Tattoo (FTC Affiliate Disclaimer).  While there is very little dialog, viewers are given a lot of action, quick thinking, and hacking.  However, with so much action, you won’t forget that this movie is a tale of two sisters who feel betrayed by each other.  One sister fight to help others.  The other sister continued her father’s psychopathic path.  When these two are face to face, blood will be spilled.  Lizbeth will need a bathtub, toothbrush, antihistamine, and a chess piece to survive.  See this movie in IMAX if you can to appreciate the effects.  While it is a great movie to see in theaters, you may not buy it.

You should ask yourself that question – Lizbeth

He bought my magazine, not my respect – Mikel

I have waited so long for this moment. I had a whole speech prepared. Now, I’m nervous. Perhaps, I should have written it down – Camilla

Yeah, I think it does – Edwin