In 2001, Teddy walked out of the GSAT test and declared that he would be successful without college.  Now, he has a great home, beautiful girlfriend, and a good job as a salesman at Joe’s BBQ City.  After working at BBQ City for 17 years, Joe wants to retire and give the business to Teddy.  Teddy’s big news give him the courage to step up in life by asking his girlfriend to marry him.  He invites her to BBQ City to tell her about promotion and get down on one knee.  With a string a bad luck, he blows up BBQ City and his promotion.  Joe has decided to take the insurance money and retire, leaving Teddy without a job and no skills.  With a load of financial debt, Teddy must get a job.  His friend believes he could use his salesman’s skills to become a great financial analyst but he would have to get his GED.  Teddy decides to go to Night School.  He is determined to get his GED, get the job, settle his debt, all while hiding it from his fiance.  However, the school principal is Teddy’s old rival.  And the teacher Ms. Carter, can’t be smoothed over.  Teddy must do the work or his life will come crashing down.

This is what we have come to expect from Kevin Hart movies.  A lot of laughs with some true emotions wrapped in an underdog story.  With a slew of short jokes, Teddy navigates his way back to school.  The biggest takeaway from this movie is hard work can still have pitfalls.  It’s how you handle those pitfalls that make you a success.  With a slew of learning disorders, Teddy has a tough road to success.  Kevin Hart fans, see this movie matinee.

I respect your honesty.  Now get out of my class – Ms. Carter

I was nervous.  I was really hoping you didn’t smell that – Teddy 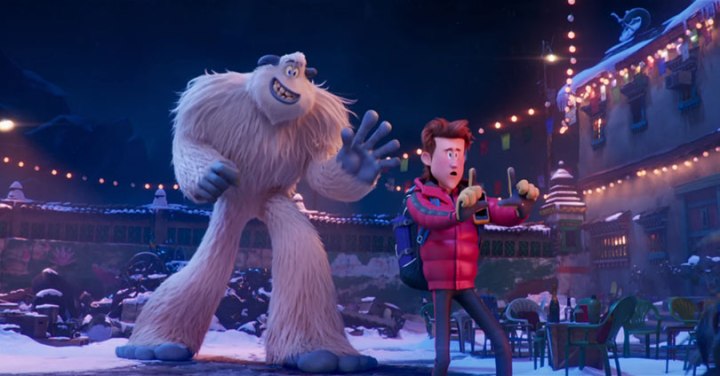 Migo hopes to become a gong-banger just like his father Dorgle.  Based on the Stonekeeper’s stones, banging the gong brings up the sun.  The Stonekeeper has a coat of stones containing the rules for the Yeti’s life.  If they ever have doubt, they are told to ignore it and swallow it down.  The stones keep them safe.  One stone states their mountain is held on the back of mammoths and if they leave the mountain, they will fall into nothingness.  Migo believes every word until he misses the gong during practice and falls down the side of the mountain.  He witnesses a plane crash and sees a pilot parachute out.  The pilot is the mythical SMALLFOOT. Migo can’t believe it.  The stone said that SMALLFOOTs didn’t exist.   Migo goes back to the village with his SMALLFOOT tales but is banished for telling lies and going against the stones.  Migo is determined to find a SMALLFOOT and is met by the S.E.S. (Smallfoot Evidentiary Society) who believe him and want to find proof.  So he heads down the mountain, into the nothingness, to get answers.

Percy Patterson is a wildlife documentary filmmaker who needs to be on top.  He has lost most of his money and needs to attract new viewers to his program.  And Percy knows going viral is the best way to get it done.  So he asks his producer, Brenda, to dress in a Yeti costume so he can “discover” it.  She refuses and walks away.  As he goes outside the lodge to try in figure things out, he sees a Yeti.  Percy believes its Brenda in the costume, but when he sees her driving away, he knows this Yeti is real.  He freaks out, attack, and is knocked out by the Yeti a.k.a Migo.  So Migo picks up Percy and heads home.  But can the Yetis handle truth outside the stones?

So, a warning to all parents: DON’T BE LATE TO THIS MOVIE.  The first 2 minutes lays down the entire framework for the movie.  You will not understand the Yeti’s beliefs, relationships, jobs, or the stones without the first 2 minutes.  And don’t be surprised if you laugh more than your children.  The writers have thrown in a lot of adult humor for you.  This movie gives a great message of not being sheep.  It tells kids that curiosity and questions are good things to have.  And while the script is one of the best since Toy Story, it provides plenty of memorable songs that you can dance to (FTC Affiliate Disclaimer).  So see this one with your kids today or by yourself.  You won’t regret it.

He doesn’t look so good – Migo

The scroll of invisible wisdom – Meechee

Please tell me we were filming that – Percy