Andrea feels a disconnect between herself and her husband because she can’t get pregnant.  She tries to convince him that adoption is the answer but he has already moved on.  After getting divorce papers, Andrea hits him in the head, killing him.   As she calls the police with fake tears, she sees the 20th high school reunion flyer in her trash.  She thinks back on the day Isabel stole homecoming queen, pushed her off the stage, and killed her future.  She decides to find Isabel and ruin her life one object at a time.

It’s not hard to see where this is going within the first five minutes.  So Isabel’s naivete comes off as sad and desperate.  But seeing how Andrea gets others to join in and use simple phone calls to destroy Isabel’s whole life is interesting.  The story offers nothing else to the viewer.  Only watch if you are as desperate as Isabel.

I just feel bad for her – Isabel

I thought we were friends – Andrea

Ellie is a grungy teen that is close to failing the 10th grade due to consistent truancy. She is tired of her mother Katherine constantly hovering and bossing her around. She would love to be an adult of for a day to have control over her entire life. Katherine has taken the daunting task of catering her own wedding. Her marriage is a day away and she is being featured in a magazine. If the article goes well, her business will go up. However, if it goes bad or doesn’t happen at all, she could lose the house. She wishes Ellie knew how good she had it as a carefree teen. Ellie wants to attend a scavenger hunt on the day of her mother’s wedding but her mother gives a resounding NO. As the two argue, they both grab hold of an hourglass and, in a flash, they switch bodies. Now, Katherine has to navigate Ellie’s high school life. While Ellie navigates Katherine’s career. However, switching back won’t be easy. During the first switch, the hourglass broke. Ellie remembers her late father gave one to her and Katherine. But Katherine sold it to an antique shop, which is now closed. They must find the hourglass to change back before Ellie (as her mom) marries her stepdad.

With so many version of this movie, this movie must add something new in order to draw old and new fans to the movie (FTC Affiliate Disclaimer).  This version adds 6 songs to the plot and nothing else.  The overall plot, characters, and scenery are all the same.  This version is for new fans only.  Everyone else can skip it.

The answer is NO – Katherine

There you are. Every magician needs an assistant – Fletcher

Dani and Jen are the main focus of an antique reality TV show. Although Dani is ready for her close up, Jen is a bit uncomfortable with the exaggerations. During a break from filming, Tamara comes into the store and asks for information on her mother-in-law Elizabeth’s Pandora’s box. Pandora boxes are notorious for destroying their contents if the puzzle is solved incorrectly. Tamara worries she could destroy something valuable. So she asks Jen to user her expertise to solve the puzzle. Jen agrees and starts filming. After the day is done, Jen looks for the box and it’s missing. When Jen finds the box, Tamara will be dead, Elizabeth’s cause of death will be questioned, and Jen will be looking down the barrel of a gun.

Based on the book series, this mystery is just as complex as the Pandora’s box (FTC Affiliate Disclaimer).  As Jen gets a step closer to finding Tamara’s killer, she learns more about the victim and the box.  Both objects are clouding Jen’s judgment of the situation.  This confusion is a new element to Jen’s character and makes for a compelling storyline about the murder.  As always, it’s funny to see people to “stay out of it” and “leave it to the police”.  Jen will never stop finding justice.

I know all her lines – Dani

It’s my last chance at a smoking body – Tramell

My arrival cuts that short – Jen 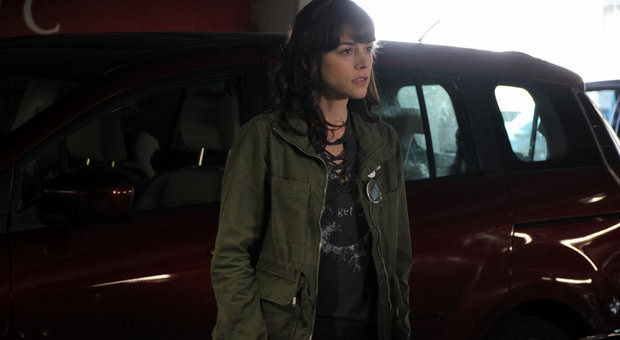 Identical twins, Callie and Elizabeth have been switching places since they were little.  The only person who could ever tell them apart was their Aunt Rose.  While Rose laughs at the girls switch, she warns them of the trouble it could cause in the future.  Years later, Callie is married to Grady and they have two children.  Yet she dreams of Elizabeth’s life.  Elizabeth works for a high power investor and lives in the big city with an even bigger loft.  She hates coming home to an empty apartment and wishes she could have a family like Callie.  On their birthday, the two meet up and decide to switch.  They will live each other’s lives for one week and switch back.  Callie loves living the big city life but Elizabeth worries they will be discovered.  Elizabeth asks to switch back early but Callie is furious and decides against it.  Moments later, Callie is killed by a hit and run.  Elizabeth gets the news and can’t muster up the courage to tell Grady about the switch.  When Rose sees Elizabeth as Callie she pleads with her to tell Grady and the children the truth.  But a Detective tells her to keep quiet.  She believes the hit-and-run was not an accident and Callie’s killer may learn that he killed the wrong woman and go after her.  This deadly switch will have an unlikely ending with several people dead.

Inspired by real events, the ending wrap-up gives a new definition to “Happily Ever After”.  When viewers see the “grass is greener” set up, you want to believe you know how the story will go.  Until Callie is hit by the car.  That moment will leave you in complete shock.  Also, as Elizabeth lives Callie’s life, she goes too far.  Now protecting herself from murders becomes projecting herself from the wrath of Grady.   This twist in the story is shocking and draws the viewer into the story.  So watch when you can devote your time.

She’s at it again, pretending to be me – Elizabeth

A Summer To Remember – Review

A Summer To Remember – Hallmark – 2 hours and 0 minutes

Dr. Jessica is maxed out.  Her best friend is 3 weeks away from giving birth, she is a single parent, and she is up for a promotion.  While living with her daughter Ava, Jessica can’t seem to unplug.  They both need this trip to Fiji. After a little time together, Jessica eloped with Greg (Ava’s father) and got married in Fiji.  So, Fiji holds a special place in Jessica’s heart.  They always believed they would come back after graduation and start a new life.  But before Greg died, he made Jessica promise she would take Ava to Fiji one day.  Now, Jessica is fulfilling that promise.  After a few hours there, Ava and Jessica create a challenge for each other.  Ava must put down her camera and Jessica must give up her phone.  Jessica finally pays attention to the world around her and twice, love knocks at her door.    Will she answer it for Will or Dr. Trevor?

While this is a typical Hallmark movie, it just feels like the overall plot is missing.  This movie doesn’t feel like a movie.  It feels more like a part of a series.  The overall story felt incomplete and devoid of true emotions.   Hallmark must understand that new scenery to an old storyline isn’t enough to keep a viewers’ interests.  If you are determined to use the same plot, at least make it funny or add more drama to the storyline.

Will, the co-owner, works better – Will

You said it – Ava

He’s got it – Jessica