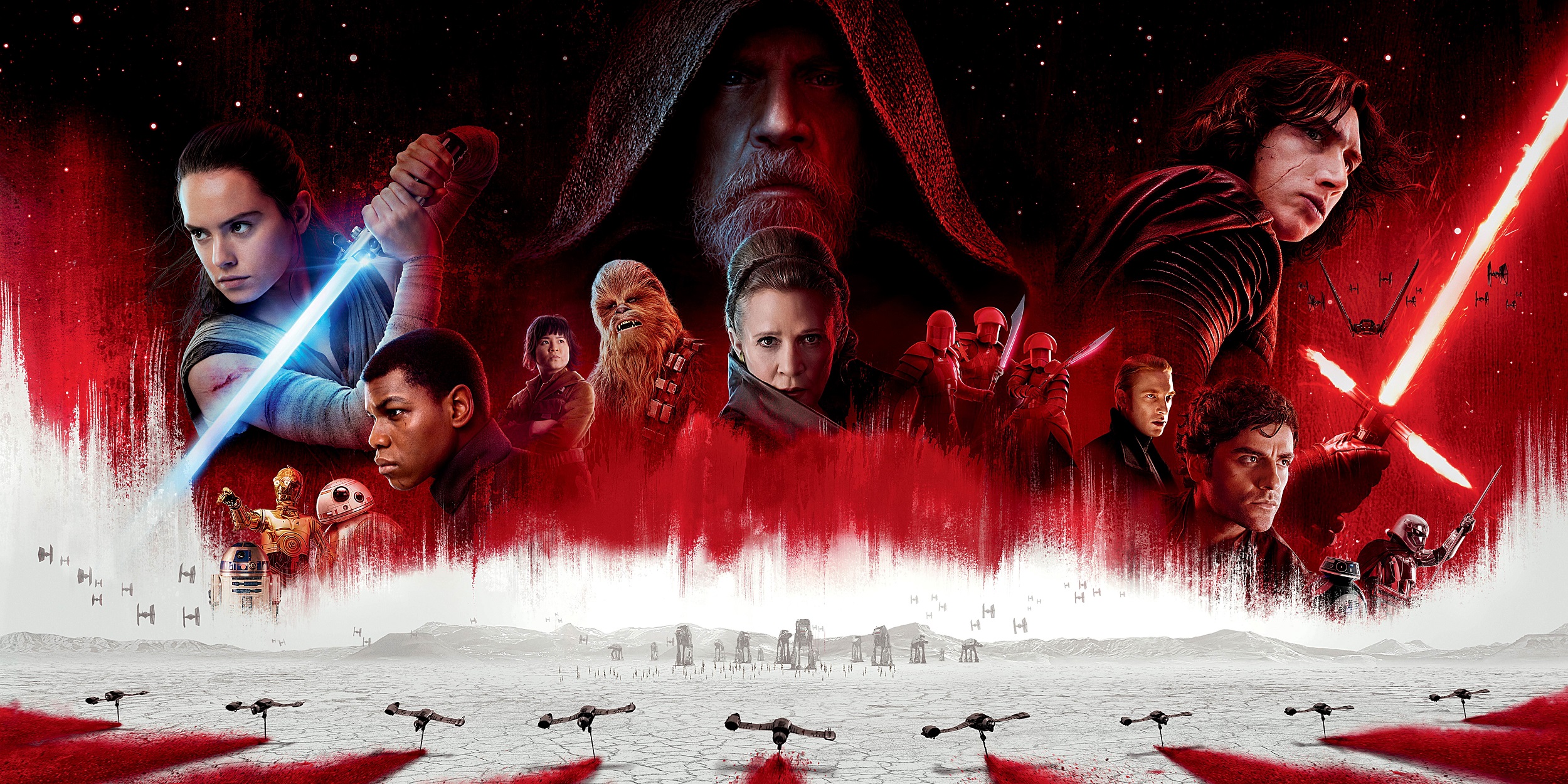 Rey is now face-to-face with the legendary Luke Skywalker.  She wants to be trained in the ways of the Jedi and bring him back to Leia & the Resistance.  He has no interest in training another Jedi and thinks it should end.  He wants to stay on his island and enjoy the simple life, without the force.  However, while Rey is with Luke, she realized she can connect to Kylo’s mind.  Kylo tells her she doesn’t know the truth about Luke.  She must ask him why he decided to give up the ways of the Jedi.  Only then will she see the truth about Luke Skywalker and join Kylo.  In space, Finn has just woken up to learn the Resistance is under attack.  They are down to their last ship and can’t run for two reasons.  First, they are low on fuel and can travel light speed one more time.  Second, the First Order can track them through light speed.  The Resistance wants to abandon ship and find safety.  However, Finn and Rose (a new friend that stunned him) come up with a plan to jam the tracker and give the Resistance time to escape.  But first, they have to break into the biometric scanner so the ship won’t detect them on board.  Maz tells them they need a code breaker on Canto Bight.  Finn must stop the tracking device so Rey will have a ship to come home to after her training is done.  With everyone’s plan in place, the Resistance will need to come together to escape the deadly clutches of the First Order.

Visually, this is an amazing, beautifully shot movie.  The scene of Rey and Luke on Ahch-To are stunning.  Also, the battle scene on Crait was enhanced with an effect where the salt became red if it was disturbed by movement.  It was the exclamation point the scene needed.  While this movie offered a lot of “hold your breath”, cheering, and crying moments, it still felt too long.  Also, Luke give you the feeling of being Mei Pei instead of a reluctant Jedi (FTC Affiliate Disclaimer).  You sit waiting for the real Luke to come back.  As this happens, you find yourself getting bored.  This movie could’ve been shorter and had the same impact.  So, definitely see it in Dolby.  When a ship gets hit, your chair will shake.  Although 3D is nice, it’s not a necessity.  While this is not the best of the Star Wars franchise, it’s not the worst (FTC Affiliate Disclaimer).

You and your friends are doomed – Holdo

I can’t feel my tongue – Finn

I can’t imagine why – Luke Skywalker

I know, I changed my hair – Leia

A young calf named Ferdinand lives at Casa Del Torro and, unlike the other bulls, he doesn’t want to fight.  He wants to snell the flowers and care for others.  His father tells Ferdinand his wants are noble.  But they are bulls and one day he has to fight.  His father is one of the best bulls in the business and is usually picked by the Matador.  After a match, Ferdinand’s dad does not come home.  In shock, Ferdinand escapes and catches a train.  He jumps off the train, runs, stumbles, and is knocked unconscious.  He wakes up in a barn and is approached by Nina.  He smells her flower in her hair and instantly becomes her pet.  She promises to never hurt him and never make him fight.  Ferdinand lives, sleeps, and eats with young Nina.  They go to the Flower Festival each year but this year Ferdinand can’t go.  Juan, Nina’s father, tells her Ferdinand is a full grown bull, not a calf.  People in town will not understand that he is gentle and sweet.  So, Nina, Juan, and Paco the dog go to the festival.  Even though Ferdinand is given every holy sign not to go, he does anyway.  After a chance of clumsy events, Ferdinand is mistaken for an angry, baby-eating bull and is taken away, back to Casa del Toro.  When Ferdinand learns the truth about bullfighting, he knows he must escape and get back to Nina or he will face the Matador in the ring.

Based on the book Ferdinand by Munro Leaf, this is a funny light-hearted comedy about tough events (FTC Affiliate Disclaimer).  Now, they never say the word “die” or “death” but it is implied.  So be prepared for the younger children to asks “what happened”.  Out of respect for the culture, they never display the bullfighters as good or bad, they are just a part of the plot to help move the story along.  Ferdinand isn’t trying to run from the fighter, but the fight itself.  He doesn’t want to be a fighting bull, just Nina’s pet.  One thing is painstakingly clear, the amount of time the animators spent studying Madrid’s city, farmland, and Matador traditions.  The backdrops and costumes are some of the most amazing in animation.  You will want to find out if these places are real and if you can go.  Stay past the first set of credits and 3D is not necessary.

Hey, I thought I was the good boy – Paco

You’re either a fighter or meat. Later meat – Valiente