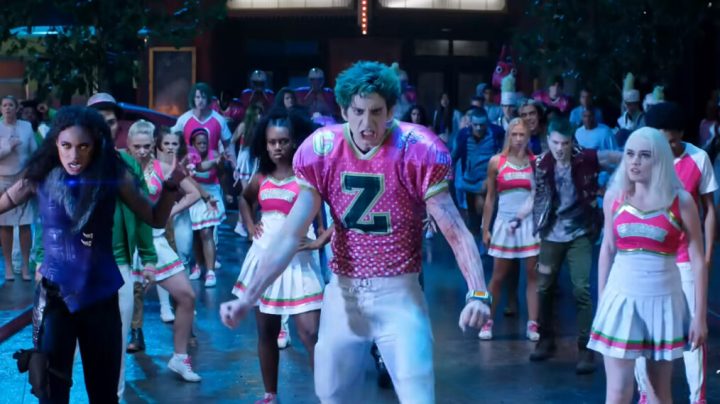 In Seabrook, the humans, zombies, and werewolves created a community of understanding. Zed wants to be the first zombie to attend college and forge a path for all monster-kind. But first, he has to win the championship game to impress the recruiters. Addison has her acceptance letter. But she worries that Zed and her can’t make their relationship last if they aren’t in the same school. Before the game, Zed and his family meet the recruiters. Although they are hesitant about a zombie in college, they want to see Zed’s skills. However, an alien spacecraft hovers over Seabrook and beams extraterrestrials, A-Lan, A-Spen, and A-li, to earth. The recruiters leave without offering Zed a spot in college. And the townspeople run for cover, except for Addison. She wants to welcome them with open arms. While the aliens aren’t here to hurt people, they keep their mission a secret. Years ago, their scout commander crash landed while looking for a livable planet. She found it and put the coordinates in the most precious thing in Seabrook. The aliens want to discover the item, get the location, and return to their new home. Addison and Zed offer to help while allowing the aliens to attend school.

After some time in Seabrook, the aliens think the moonstone is what they need. When they try to steal it, the werewolves come looking for them. The aliens ask the mothership to beam them up, but it pulls up Addison too. Addison is an alien and thinks she has found her place in the world. But she doesn’t have their spark. Once again, Addison is a girl with no country and feels too down to help. The aliens will need the entire town to get home while helping Zed get into college for monster-kind and his relationship.

This third installment has a mix of E.T., Bring it On, and Guardians of the Galaxy with a Disney Channel Soundtrack (FTC Affiliate Disclaimer). Unlike the people of Seabrook, Addison wants to welcome the aliens with open arms because she still feels alone. Addison doesn’t feel like a human with bright white hair and isn’t a werewolf. Nevertheless, Addison is the linchpin for all creatures in Seabrook. The film hints about environmental issues, but that’s not the plot. The story is about finding the purpose in conflict and differences. This lesson is appropriate for this generation of Disney fans in a world that can’t agree to disagree.

Maybe she has a little bit too much school spirit – Wyatt

Never too much. You do you – Zed

You should not – Willa

Don’t worry about the aliens. I am not afraid of a little competition – Addison

Yes, being better than others is very enjoyable – A-Lan

What does that expression mean – A-spen

Zombie-kind is depending on you – Eliza