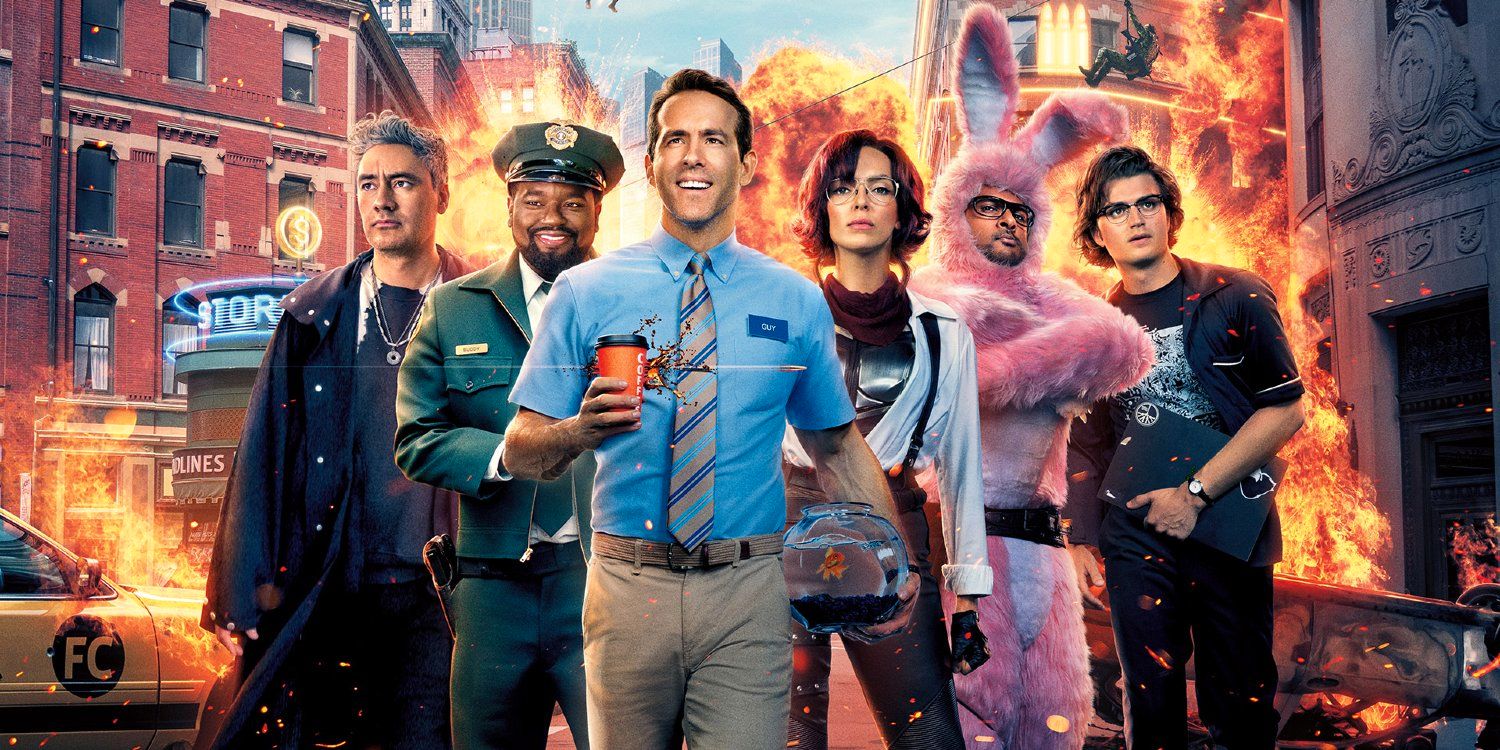 Guy works as a banker in Free City.  Every day, Guy wakes up, says hi to his goldfish, gets coffee, goes to work, gets robbed multiple times, and goes home.  The robbers are the sunglasses people.  They don’t communicate with Guy and his friends, but they are the heroes of Free City.  While Guy adores his life, he tells his best friend, Buddy, the bank security guard, that he is missing something: love.  He dreams of a woman that likes five-octave pop stars, swings, and bubble gum ice cream (FTC Affiliate Disclaimer).  As Guy walks down the street with Buddy, he sees a woman humming a familiar song and becomes fixated on her.  Buddy reminds Guy that the woman is wearing sunglasses and sunglasses people don’t talk to them.  The next day, something in Guy changed.  Instead of coffee, he tries to order a cappuccino, which confuses the barista.  Guy decides to get a pair of sunglasses and talk to his dream woman.  During the next bank robbery, Guy gets up and asks the robber for his glasses.  When Guy tries to take them, he accidently shoots the robber, gets the glasses, and follows the woman.  She is Molotov Girl, a level 197, experienced player.  She won’t work with Guy until he levels up.  And right now, Guy is at level 1.  Guy is not sure how to level up, so she tells him to complete some missions.  Guy is confused.  So, Molotov Girl tells Guy to put on the glasses, and Guy sees a whole new world of experience points, money, and power-ups.  Molotov Girl tells Guy to rob or punch someone, and he will level up quickly.  But Guy doesn’t want to hurt people.  Instead, he will help his friends by stopping sunglasses people from robbing, maiming, or killing them.  Guy’s nice guy routine catches the world by storm because Guy is an Non-Player Character or NPC in the world’s most popular game, Free City.  But Guy doesn’t know it.  Molotov Girl does, and in real life, she is Millie, a game designer.  In 2015, Millie and Walter, a.k.a. Keys, created a world with AI.  People can watch as the NPCs learn, grow, and develop lives.  While Keys works for Soonami and its owner Antwan, Millie sued them.  She believes Antwan stole their base code to create Free City.  She spends her time in the game trying to find the proof on an unseen level.  Keys tells Millie to drop the suit, but Millie wants his help unlocking the secret level.  As Guy gains popularity, Keys and his co-worker, Mouser, want to know who the gamer behind Guy is, but they can’t find it on the server.  Antwan likes the character because Guy brings attention to Free City, and its upcoming update, Free City 2.  But Antwan’s feelings will differ when players change how they look at NPCs and violent games.  At first, Millie needed Guy to prove her case, but now she will need Guy to save himself, Free City, and his friends before Antwan destroys the servers.

This movie speaks to anyone who felt like a background character in their lives.  You don’t have to be an NPC.  You can venture off the hamster wheel and do something spectacular, but you have to take the first step.  While this movie inspires, it highlights issues in the gaming world.  With the bombshells who go for bad guys, games that glamorize violence, and the owner’s constant money grab, the gamers get the short end of the stick.  They get glitchy games, games that are not backward compatible and have buffering issues.  And the God mode can cripple players at any moment if they advance too much, too soon.  This mix of Jumanji: The Next Level, Ready Player One, and The Lego Movie has memorable moments, laughable dialogue, a love story, and lots of easter eggs (FTC Affiliate Disclaimer).  In the end, you will learn that someone created Guy with a purpose, and he isn’t any ordinary NPC.

Zeros and ones are cool as s**t – Keys

I’ve seen that place before – Guy