Memories of a Murder – Review

Memories of a Murder – Lifetime – 2 hours and 0 minutes 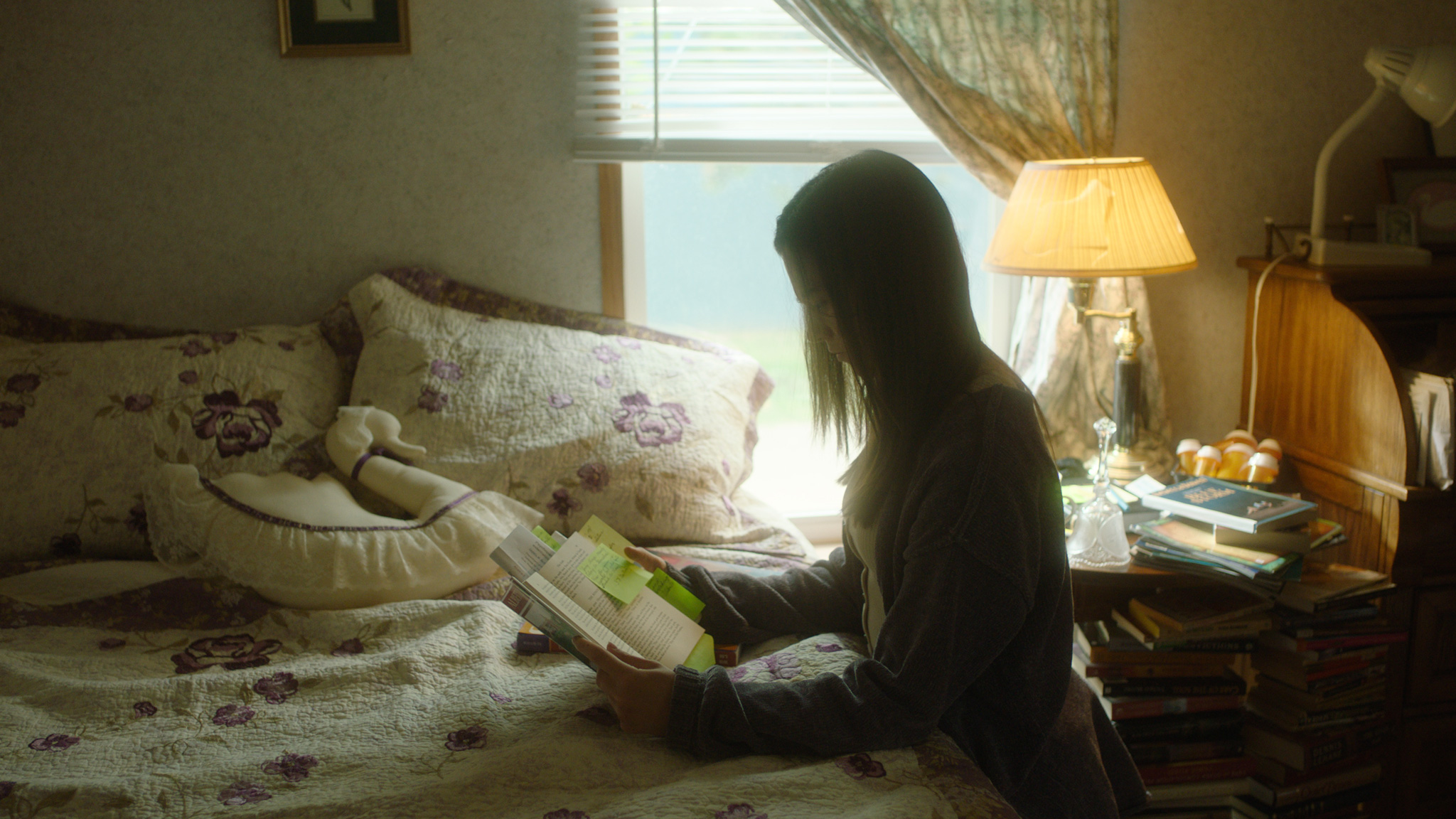 Gail is the town outcast because of her family’s business, Morbid Curiosities.  The store sells murderers’ memorabilia from crime scenes, jail cells, and personal effects.  While cleaning egg off the storefront with her best friend, Alexa, Gail sees a package and takes it inside.  Inside the parcel is a knife block, figurine, and Crime and Punishment (FTC Affiliate Disclaimer).  Gail calls her wheelchair-bound grandmother, Margot, to find out if she ordered the items.  But Margot didn’t.  Moments later, Gail gets a mysterious phone call asking if she got the package.  The caller hints they are related, and Gail’s father is the Midwest Taxidermy Killer, G. W. Stubbs, not Gary Niven.  The caller tells Gail the items in the box are from a recent murder, and she should sell them.  Gail goes home to Margot with a head full of questions.  Before Gail can ask anything on her mind, Margot tells Gail that an admissions officer from Bowdon University called, but Margot rejected Gail’s acceptance.  Margot needs Gail to stay and work in the store.  Gail is furious but goes back to work.  Detective Janice comes into the store and asks Margot about a recent customer because someone murdered the customer, who was wearing a jacket from her store.  Gail remembers the customer but tells Janice that she nor Margot had anything to do with the murder.  Janice leaves her information and walks out the door.  Then, Margot gets another call asking if she sold the items yet.  After seeing a matching figurine on a crime news report, Gail has second thoughts about selling it.  However, Alexa wants to sell to make the creepy caller go away.  In a fury, Gail looks for information and finds her birth certificate.  She can see the father’s name is blank.  Now, Gail has two mysteries to solve.  Who is killing her customers, and who is her father?

This movie is a bit slower than the crazier Lifetime films that Lifetimers are used to viewing.  It spends time showing you the hostile nature of the townspeople and Margot’s abuse towards Gail.  You will look at Gail as a sympathetic character that is manipulatable.  As Gail picks apart her past, the writers leave little clues about the killer.  With everyone around her keeping a secret, they all become suspects.  Some will spot the killer before understanding why they killed.  Make sure you stick around for the why and the conclusion.  The end makes for a peaceful resolution.

I never really had a choice in the matter – Gail

Snakes are friends to women – Margot

Deceived by My Mother-in-Law – Review 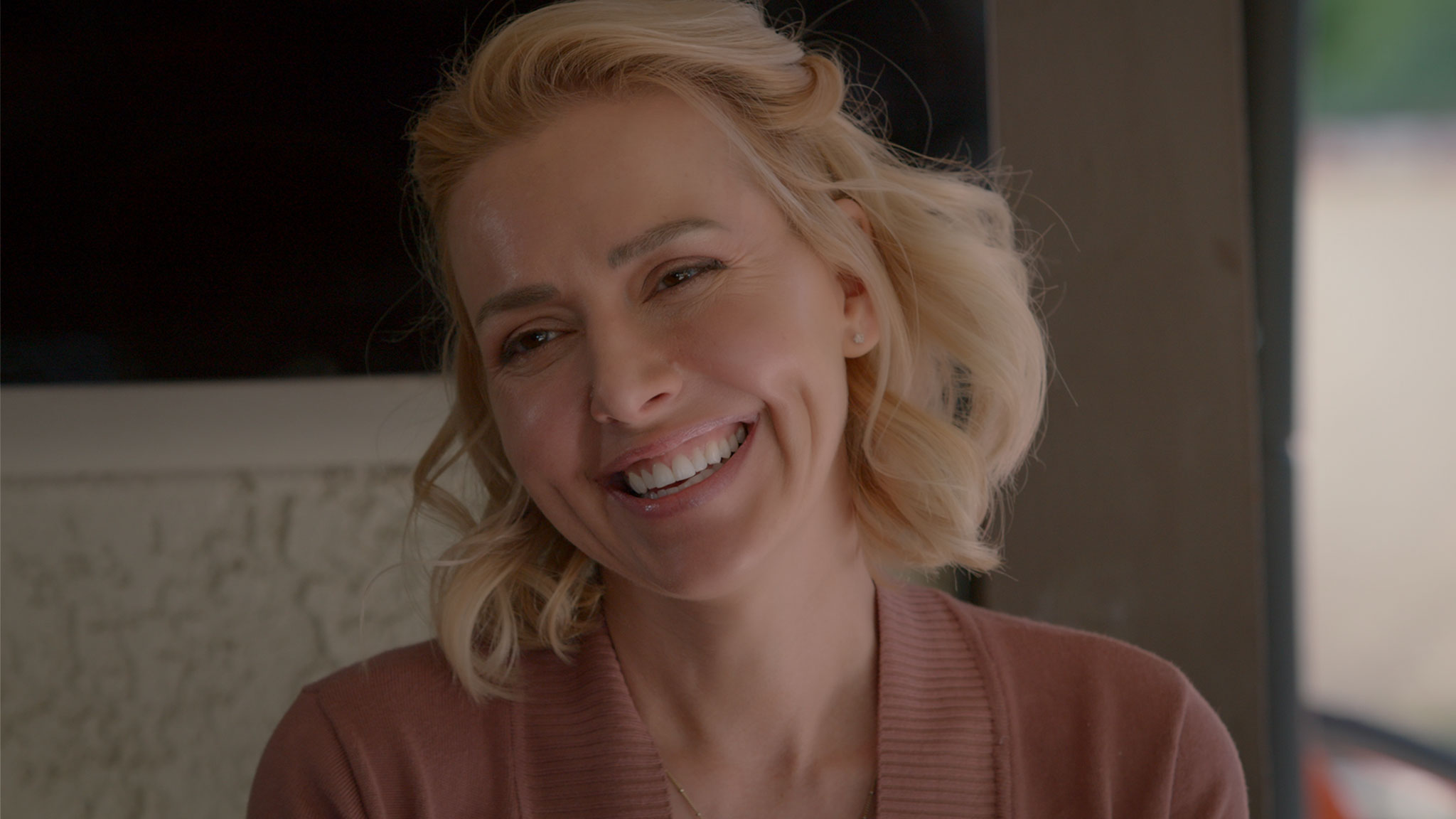 After a trying year and two stalkers, Kristen wants to put the past behind her and enjoy her life with her new husband, James, and her daughter, Mara.  Mara likes James, but she feels her mother’s wedding was a bit rushed.  However, James is instrumental to Kristen’s recovery from her nervous breakdown.  To help his ill-stricken mother, Maggie, James invited Maggie to live in his and Kristen’s home.  The moment Maggie meets Mara and Kristen, Maggie is abrupt, rude, vaguely hostile, and camera shy.  Maggie doesn’t like Kristen’s profession or her secret wedding to James.  When Kristen points out Maggie’s attitude problem, James blames it on Maggie’s illness.  The next day, Kristen sees a man following her, gets gifts from strangers, and gets hang-up calls.  Kristen believes someone is stalking her again, and she is coming unglued.  And that’s what Maggie wants, for Kristen to fall off the rails and into an asylum.  But as Kristen falls apart, Mara is there to get her mother back on track.  With Mara on Kristen’s side, Maggie will need a few dead bodies to keep her plan going.

First, a round of applause for Mara because this teen isn’t the spoiled, snarky brat we typically get with Lifetime movies.  Now, don’t get it twisted.  Mara is snide but for the sake of her mother’s safety.  It doesn’t matter who Mara is talking to; Mara will defend Kristen at any cost.  The plot does a great job of keeping viewers in the dark about the plan, the mastermind, and the stalker until needed.  And it warns you about oversharing on the internet.  It’s easy to say that this film is flipping good.

I think that you deserve it – Mara

For the record, I’m the breadwinner of the family – Kristen

Do I have the greatest wife, or what – James

How I Met Your Murderer – Review

How I Met Your Murderer – Lifetime – 2 hours and 0 minutes 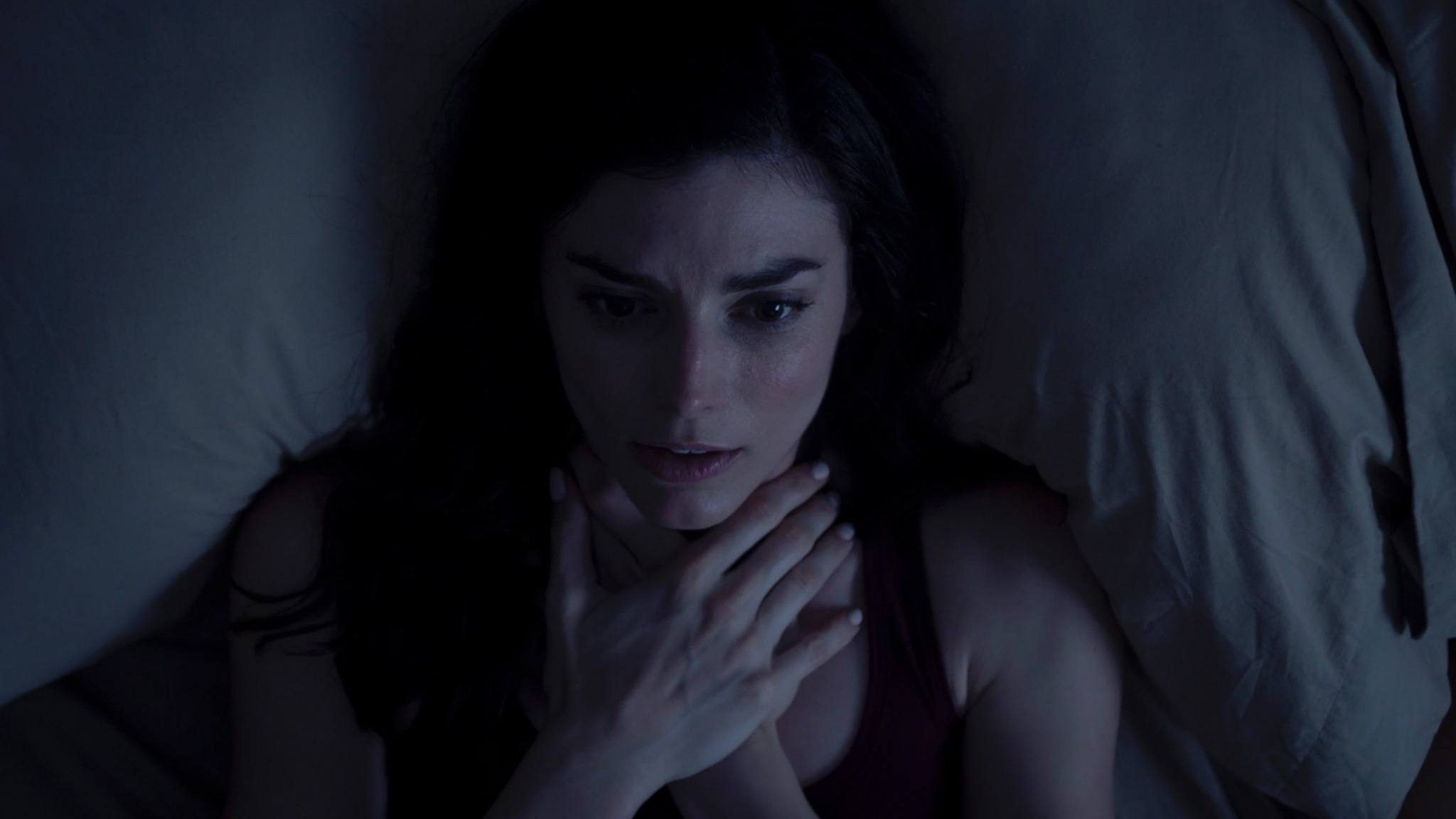 Mackenzie, known as Mack, hosts a crime podcast called ‘How I Met Your Murderer,’ produced by her best friend, June.  Mack and her husband, Henry, moved back to Henry’s hometown to start a family with the assistance of IVF.  After her third try, Mack is still not pregnant.  Her growing frustrations lead her to believe that Henry is having an affair.  With anger, he tries to assure her that he is faithful this time and ready to be a father.  After a broadcast, Mack meets with a fan who alludes to the hometown mystery of the Blue Ribbon Killer.  Curiosity gets the best of Mack, and she starts to look into the crime.  Mack sees that the murders have the classic signature and victimology.  But she gets a shock when she learns each victim links to Henry.  Mack worries he could be the Blue Ribbon killer.  As she digs deeper into the mystery, the town turns on her for dredging up the past.  A poster left several threatening comments on the podcast’s webpage, and Mack and June are uneasy.  However, Mack’s newest friend, Oliver, puts her at ease.  Oliver is a police officer by day and photographer by night.  He offers to take pictures for Mack to increase his portfolio.  Mack hopes having a cop by her side will give her access to police information about the Blue Ribbon Killer.  Mack needs to tread lightly because her life and marriage are at risk.

This movie has the potential to be an HMM mystery, but it lacks enough suspects to make you point your attention elsewhere.  Experienced Lifetimers will pick out the murderer in 5 seconds of the killer being on screen.  It’s not who the killer is that will make you watch.  It’s Mack uncovering the truth.  Your favorite character, hands down, will be June.  She speaks truth into every moment of this film.  June is worth the watch.

Podcast famous, if that counts – Mack

Just for the Summer – Review

Just for the Summer – UPtv – 2 hours and 0 minutes 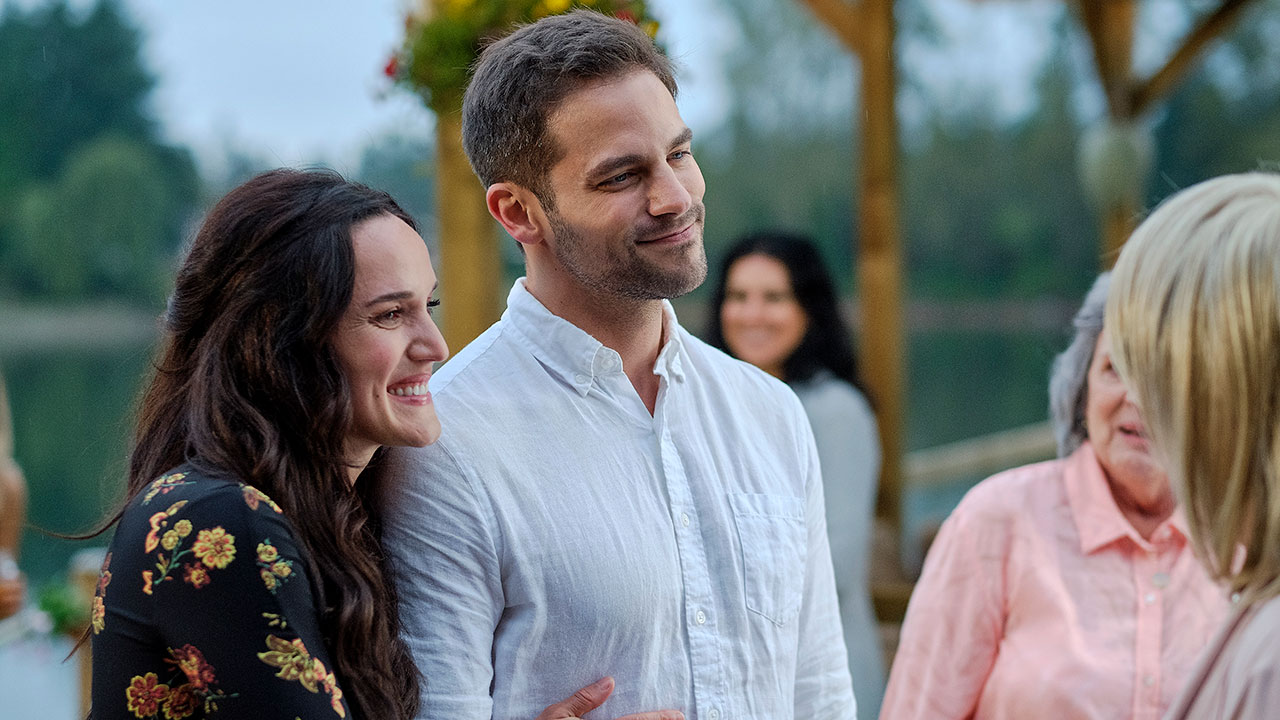 Penelope has her bags packed to travel home for her Grandma Dot’s 75th birthday bash.  But the trip won’t be all fun and games.  Her manager, Liam, sent her book to the last publishing company in town, and they are interested but only if she makes extensive edits.  Liam would prefer it if she didn’t leave town, but he understands that family comes first.  Penelope promises to work while on vacation because she wants the published book, a dedication to her grandmother, to be Dot’s present.  After arriving at Dot’s home, Penelope unloads her luggage from the car when her old high school boyfriend, Jason, comes over to help.  They have a clumsy re-introduction, and Penelope quickly runs back into Dot’s home.  Dot asks Penelope about Jason, but Penelope shuts Dot down.  Penelope has no interest in rekindling her romance with Jason.  She wants to focus on Dot, the party, and the book.  But Dot and Jason’s grandmother have a plan up their sleeves.  They are scheming with rags, bread, and poems to get these two together.  After several run-ins, Jason comes up with a plan.  They will pretend to date for the summer to get their grandmothers off their back.  This ruse will give Penelope time to write and Jason time to get over his last relationship.  Will this fake romance become a reality? Time will tell.

Let’s give a round of applause for the grandmas of this story.  They will keep you watching from beginning to end.  It would be great to see a movie of them just scheming.  Every other aspect, while cute, was 100% predictable.  This movie is something to watch if you need to kill two hours or have background noise for your responsibilities.  However, it should not take up space on your DVR or make you cancel plans to watch.

The only thing more powerful than time Is love – Grandma Dot

Jason told grandma that you were someone special – Lilly

The struggle is real – Penelope

Maybe try not to wince every time I touch you – Jason