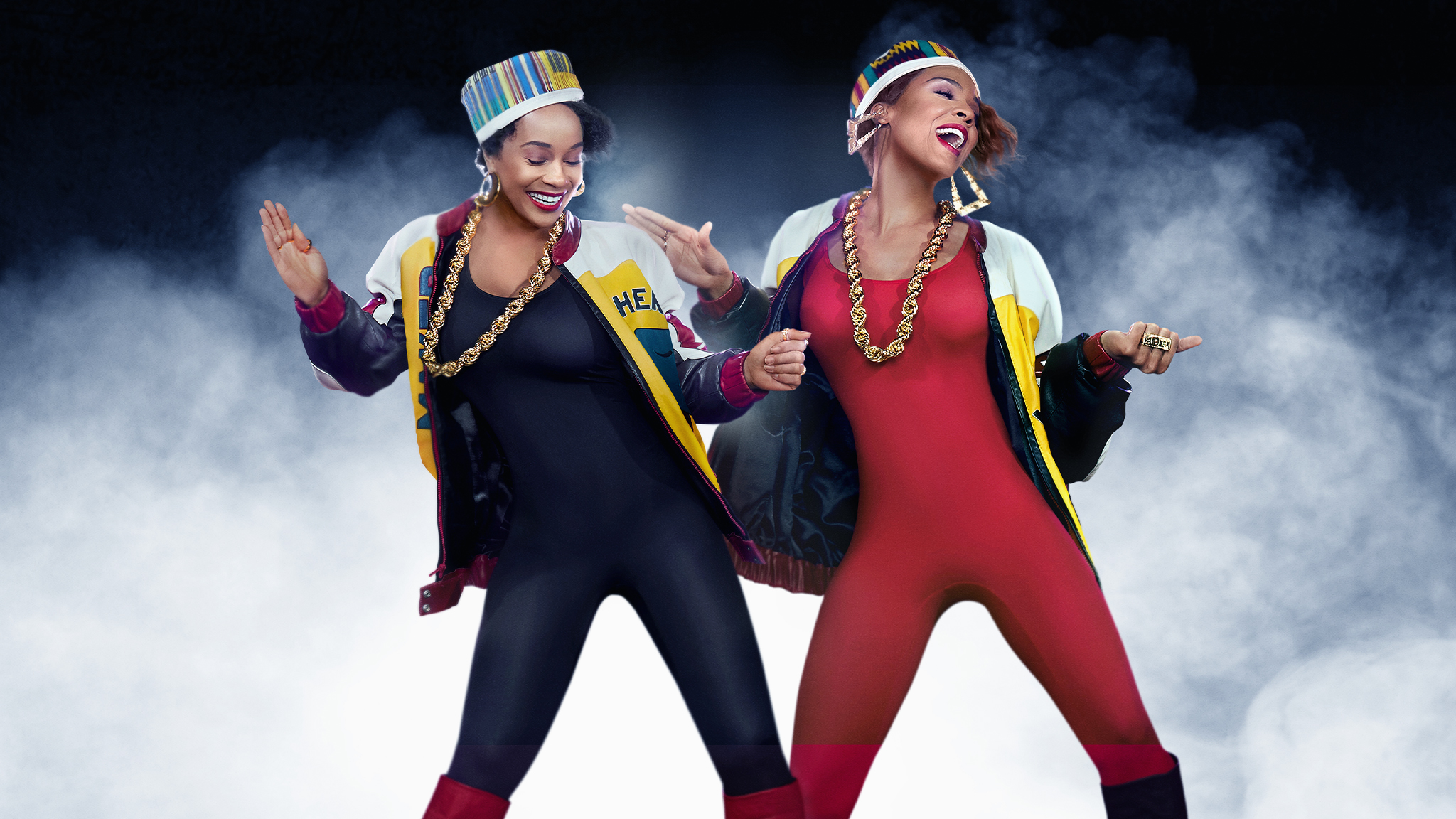 In 1985, at Queensborough Community College, Sandy walked in for spades and asked Cheryl if she knew how to play.  Cheryl turned down Sandy’s offer because handing out Sears applications were her focus.  Sandy asks Cheryl about the applications. Cheryl explained that she worked in the call center, signing people up for warranties, and made $5 an hour.  Plus, Cheryl got a bonus for every application that became a referral.  A week later, Sandy walks into the call room and gets a seat next to Cheryl, and Cheryl introduces her to several teammates.  First, they have the two Chris’s, who call themselves Kid ‘N Play.  And next, Martin Lawrence.  He is trying to be the next Richard Pryor.  At home, Cheryl’s boyfriend, Herbie, wants to make a response-diss rap for The Show like Roxanne’s Revenge did for Roxanne.  He believes the rap will put them on the map, especially if they do it as an Ashford and Simpson duet (FTC Affiliate Disclaimer).  Herbie gets in the studio with Cheryl, but their voices don’t sound good together.  So he gets an idea, they need another girl.  Cheryl remembers Sandy.  Sandy gets in the studio and clashes with Herbie instantly.  However, the women’s vocals compliment each other.  Within six weeks, their song, The Showstoppers, is on the radio and in heavy rotation.  Promoters hire them at local clubs, bars, and high schools to perform.  Fans are calling them Salt-N-Pepa because of a line in the song.   Herbie decides that Cheryl will be Salt, and Sandy will be Pepa.  It’s not long before they find out a local hustler is pawning off another duo as the group.  But Herbie gets his family involved to market, trademark, and produce the group.  They get a DJ called Spinderella and record their first album.  With the song Push It, they become household names but boyfriends, money, self-mutilation, eating disorders, partying, legal disputes, faith, and arguments over significance become dominant hurdles in the group (FTC Affiliate Disclaimer).  After the dust settles, will there be a Salt-N-Pepa?

With some so-so casting and lack of Spinderella, the movie gets off to a bumpy start.  However, the plot discusses the personal fallout of the group as its popularity rises.  That’s when the story gets real.  The women claim they are better at solving other people’s problems than theirs.  And that rings true during their friendship.  Cheryl gives Sandy advice on slowing down and partying less, but Sandy gives Cheryl advice about standing up to Herbie.  While they provide this advice for each other, they are both coming apart secretly.  Cheryl starts to have a crisis of faith, while Sandy’s is money.  As the media points out their weight, while they balance being good mothers, your heart will break for them.  But through a male-dominated industry, their biggest opponents were themselves and each other.  So, sit back, enjoy this movie, and learn.

What do you want for me? That’s my man – Salt

No, I only cast my spells on the tracks – Herbie 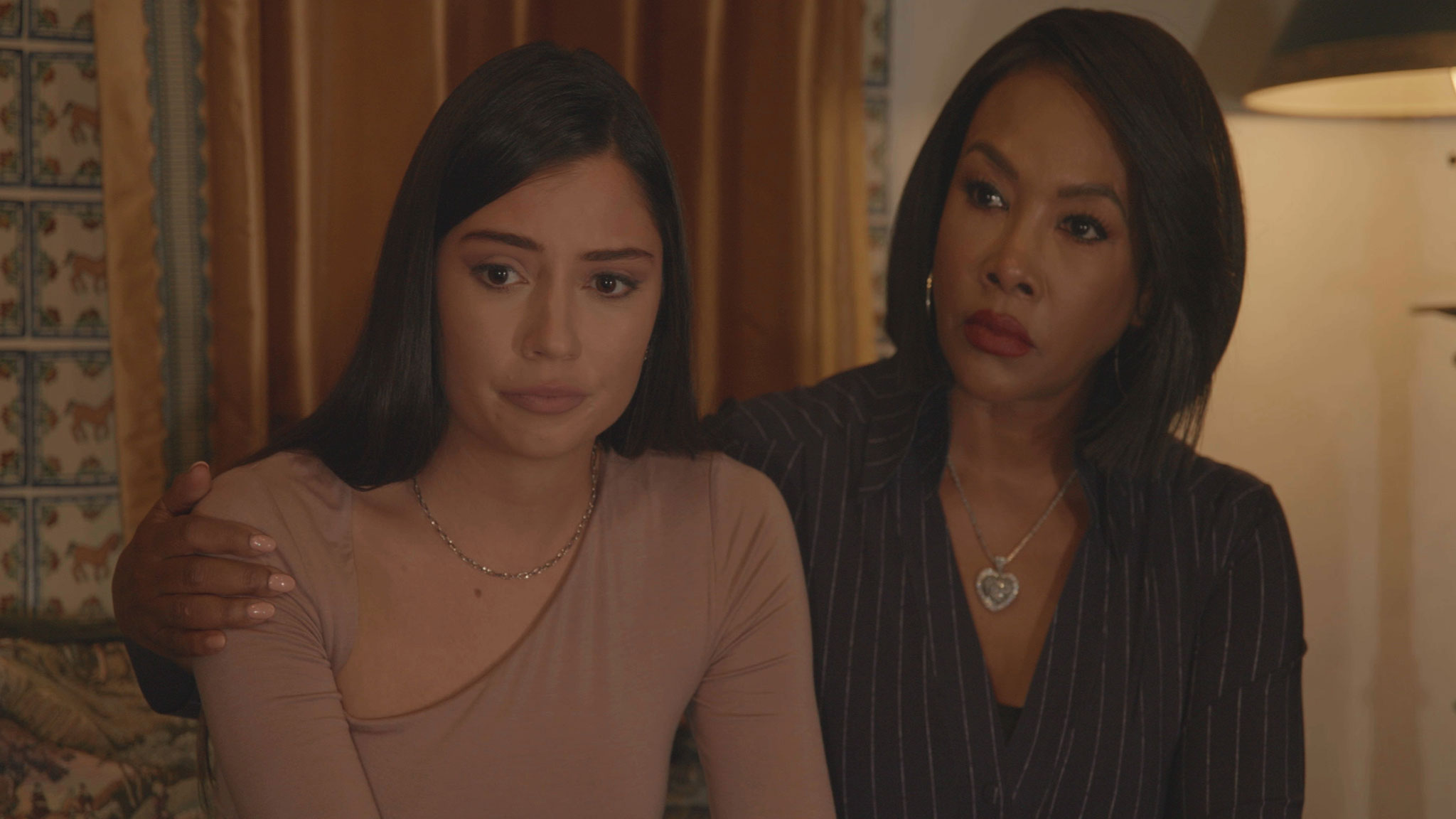 Anna works hard as the lead legal counsel and vice president of Davis Real Estate.  Her boss, Bridget, walks into the conference room with an exciting announcement, Prince Edward of Devonshire wants to invest in their property.  So Bridget scheduled a meeting with Prince Edward and the controller of Devonshire holdings, Liam.  Anna is understandably nervous, but Bridget tells her to relax and be herself.  At the meeting, Edward and Liam inform Bridget and Anna that they will invest $300 million into the project, but first, Davis Real Estate has to put $30 million in an escrow account to trigger a loss and avoid taxes.  After the deal ends, both parties will have access to the money to use as needed for the property.  Bridget tells them to send the numbers to Anna, and Anna will go over all the paperwork and give them a definitive answer.  After the meeting, Anna meets with her best friend, Heather, for coffee, and Mia approaches them.  Mia warns Anna that Prince Edward isn’t who he says he is and leaves her business card.  Anna writes off Mia as a crazy person and ignores her.  The next day, Anna tells Bridget that she finished the paperwork and everything looks good.  Bridget sets up another appointment for Anna to be with Edward alone.  And Bridget hints that Anna should have a “good time” with the Prince.  Edward is more concerned with Anna than the numbers, but he guarantees the deal is as good as done.  That’s because the agreement is fake.  Edward and Liam are con-artists.  They stole $200,000 from Mia and moved on for a bigger payday.  It will take a slip of the tongue, two missing people, and a concerned step-sister to bring Edward and Liam’s deceitful ways to light.

So two lessons come from this movie.  First, pay attention to internet articles.  And second, never try to dodge Uncle Sam.  At first, it’s easy to give up on this movie because you believe you know the setup.  However, the mouse becomes the cat and vice versa.  Bridget and Anna try to stay a step ahead of the wire transfer and the thieves.  And that’s when things get interesting.  You will be sucked in and want a part two after the credits roll.  And yes, you do get the classic line.

He may be a prince but he’s also a business man.  A businessman with a robust fund – Bridget

When she does, we’ll deal with her then – Edward

Ships in the Night: A Martha’s Vineyard Mystery – Review

Ships in the Night: A Martha’s Vineyard Mystery – HMM – 2 hours and 0 minutes 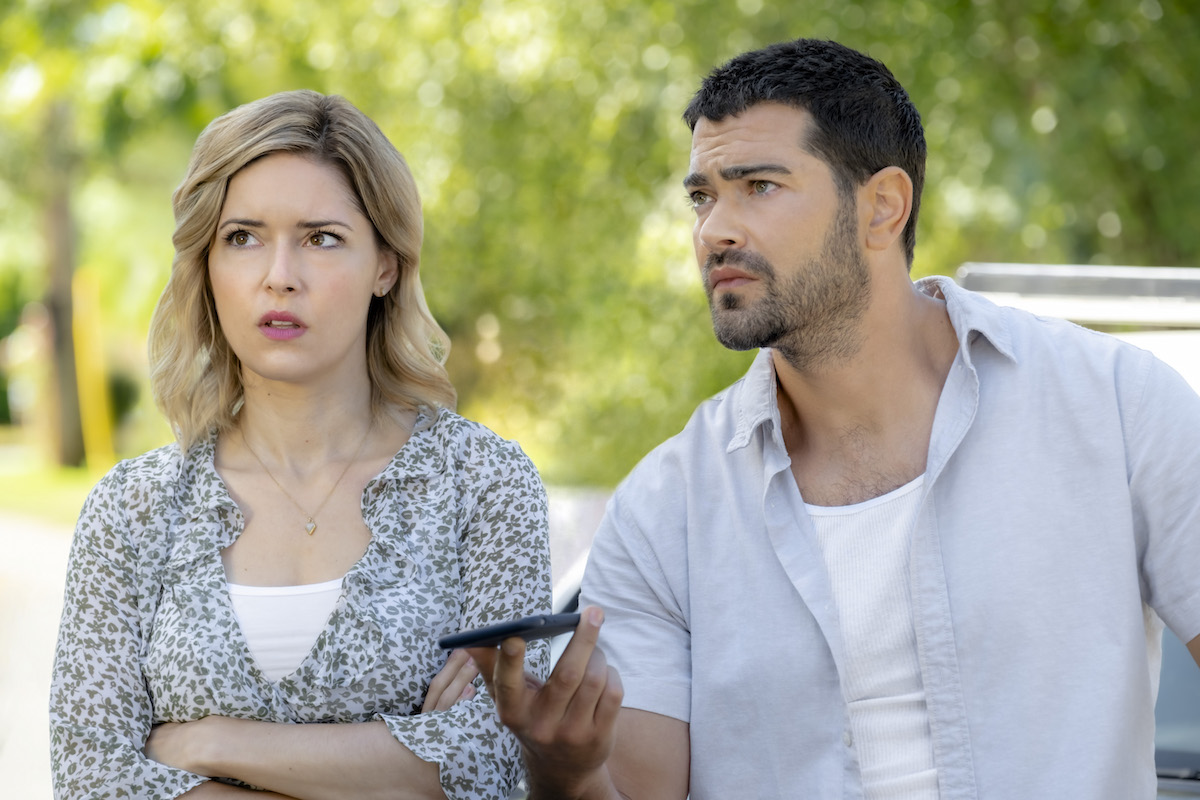 Dr. Zee and Britt arrive at the Winchester Gallery to pick up a painting donated to their auction.  Inside, Zee sees Bernadette on the floor in a pool of blood.  Zee and Britt break the glass door and enter the room.  Zee observes that Bernadette is dead.  When Chief Madieras arrives to look over the crime scene, Jeff notices a statue is missing.  They believe finding the sculpture is the key to unlocking the murderer.  Zee goes with Jeff to investigate Bernadette’s co-workers and friends for potential enemies.  They question Bernadette’s co-worker, Lila, first because she was Bernadette’s last call.  Then, the Chief and Jeff interview Bernadette’s husband, Derrick, because their marriage hit a bad patch.  Many believed Derrick wanted her dead.  Later, Zee and Jeff talk to Carl; he created the missing sculpture and was having an affair with Bernadette.  Finally, the chief and Jeff interview Suzanne because Jeff saw her offer double for the artwork before it was missing.  This tale will lead Zee and Jeff on unconventional and unknown dates, canceled plans, and life-saving technology.

Based on Martha’s Vineyard Mystery book series, this movie has twists and turns that gives itself away (FTC Affiliate Disclaimer).  The killer will be predictable for experience Hallmarkies but the why is not.  So keep watching to discover why someone killed Bernadette, not who.  Another reason to watch, seeing Jeff and Zee unveil another layer to the ‘who shot him’ mystery.  It’s a great link in the chain to the ultimate enigma of this series.  You will enjoy the next clue of Jeff’s puzzle.

It would be tragic if fate was conspiring against us – Jeff

And yet, there you are – Chief Madieras

She wasn’t exactly know for her charm – Zee 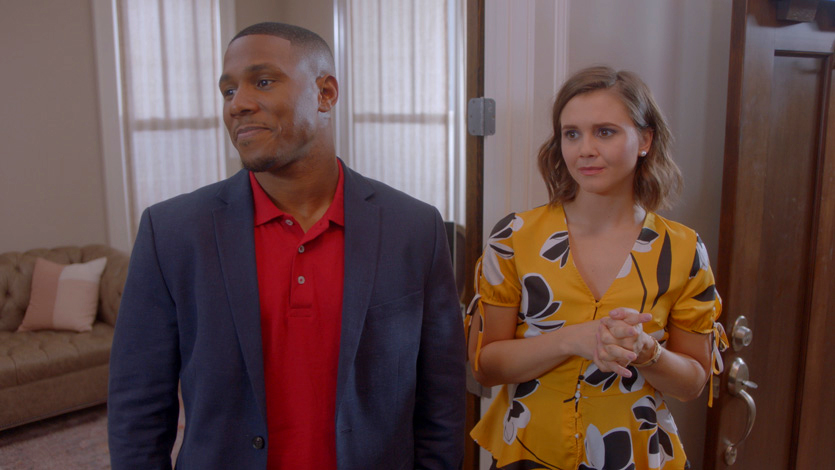 Layla joined Wake Up Chicago as a co-host to Derek.  She added some spontaneity, but Derek likes the rehearsed setup of the show.  However, Derek is better with fan engagement.  Layla doesn’t know how to take selfies, have small talk, or prepare for intruding fans.  Their manager, Allie, heard through the grapevine that Day View’s lead anchor retired and the show needs a replacement.  The show decided to replace the anchor with a team, so Allie wants them to step up their work and create an audition tape for the network executives.  Layla wants to shake things up a bit.  But, Derek wants to stick to the tried and true method of their show.  One day, Layla walks into her dressing room and finds a baby with a note.  An elderly fan gave the baby, Poppy May, to Derek and Layla because the fan thought they were a couple.  Derek isn’t ready to be a father, and Layla is engaged to Brad.  After hearing Poppy will go into foster care, Derek remembers his sister, Helen, got some devastating news that she couldn’t have children so she decided to adopt.  He calls Helen and tells her the story.  She is more than happy to adopt Poppy May.  However, a storm leaves Helen and Helen’s husband stuck in Canada, and they can’t come back for a week.  Derek and Layla will have to care for Poppy while planning the best audition of their careers.  How hard can one baby be?

The moment Derek and Layla question the complicated nature of a baby, you will laugh out loud.  Derek and Layla create a baby schedule to accommodate their lives but use their village to care for Poppy during work hours.  Spending time with Poppy allows them to have an in-depth discussion about their fears, goals, and childhoods.  Seeing their connection throughout deep parental bonding makes the romance real and understandable.  You watch only to see how this extreme lifestyle change will affect their careers and lives, especially when the paparazzi end up on Layla’s doorstep and the fiancé learns about the baby.  These emotional tornados will have you glued to the TV.

Preparation is the key to good hosting – Derek

Just promise me if you ever disagree with me, you’ll tell me – Layla

Two for the Win – Review

Two for the Win – Hallmark – 2 hours and 0 minutes 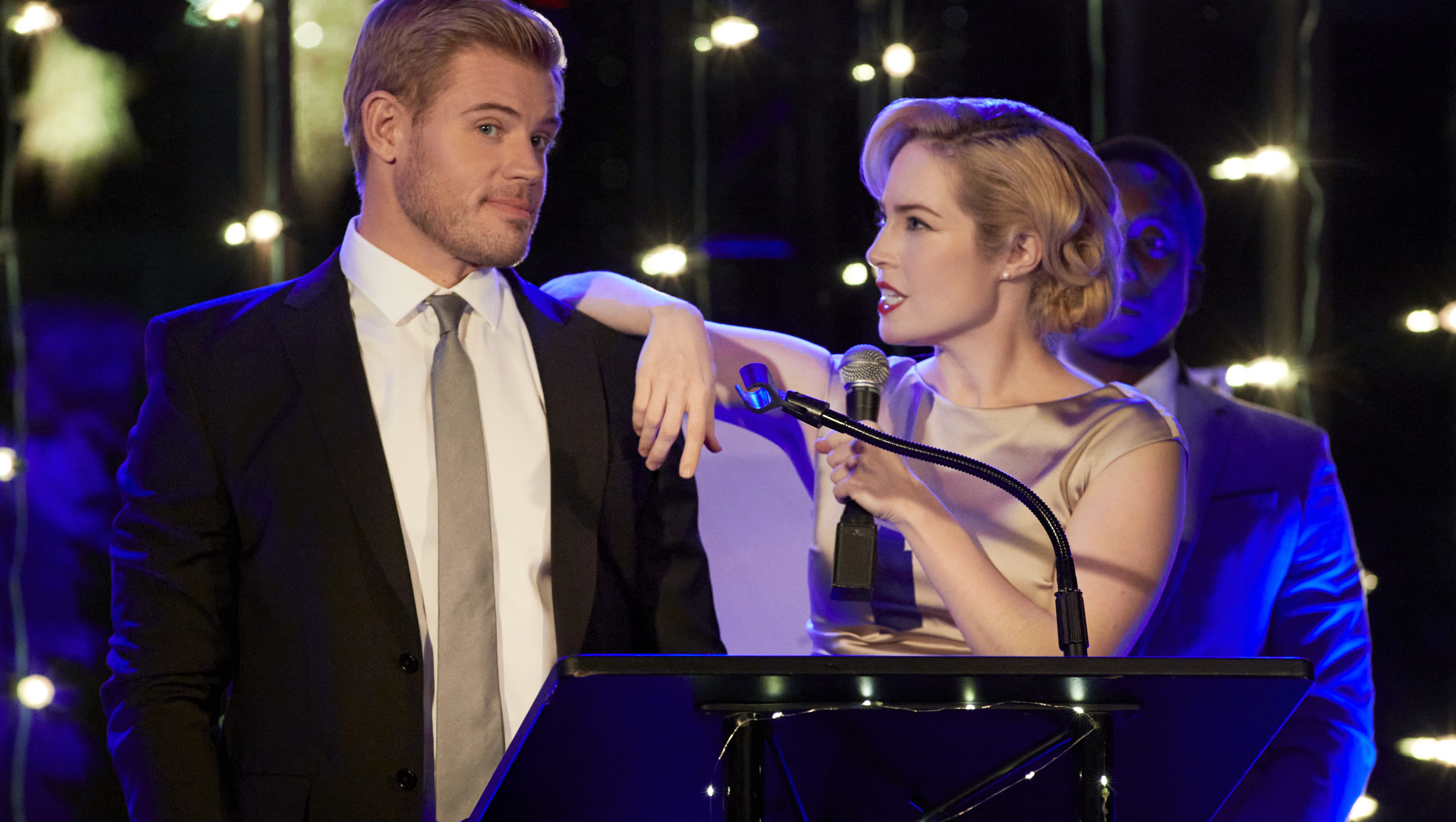 Justin finished his rehab, and he is prepared to get back on his skis, but his coach doesn’t believe he is ready.  Justin wants to defend his title and make a comeback to prove to the world and sponsors that he has the goods.  Since he can’t get his coach to work with him, his manager, Anna, tells Justin to go back to his parents’ ski lodge, Winter Mountain, and train before the Winter Classic.  Justin hasn’t seen his parents in years because of their strained relationship.  However, Justin plays nice with his mom with his dad’s constant criticism in his ear.  On his first practice run, Justin falls and sees a ghost from his past, Kayla.  Kayla coached Justin through his first Winter Classic, so he has an idea to have Kayla be his coach.  She worries that Justin cares more about notoriety than the sport, but he promises to follow her lead.  With younger competition on his heels, can Justin focus on the task at hand while falling for Kayla?

Based on Sleigh Bells in the Snow by Sarah Morgan, this movie doesn’t capture your attention (FTC Affiliate Disclaimer).  You will focus more on the relationship between Justin and Kayla’s friends instead of theirs.  Even the comic relief of Anna isn’t enough to keep you mentally tuned in to the film.  This movie won’t be a favorite of yours for the season.

You look like you just seen a ghost – Justin

Oh I don’t teach anything that’s without reason – Kayla

Are you going to listen to her – Anna