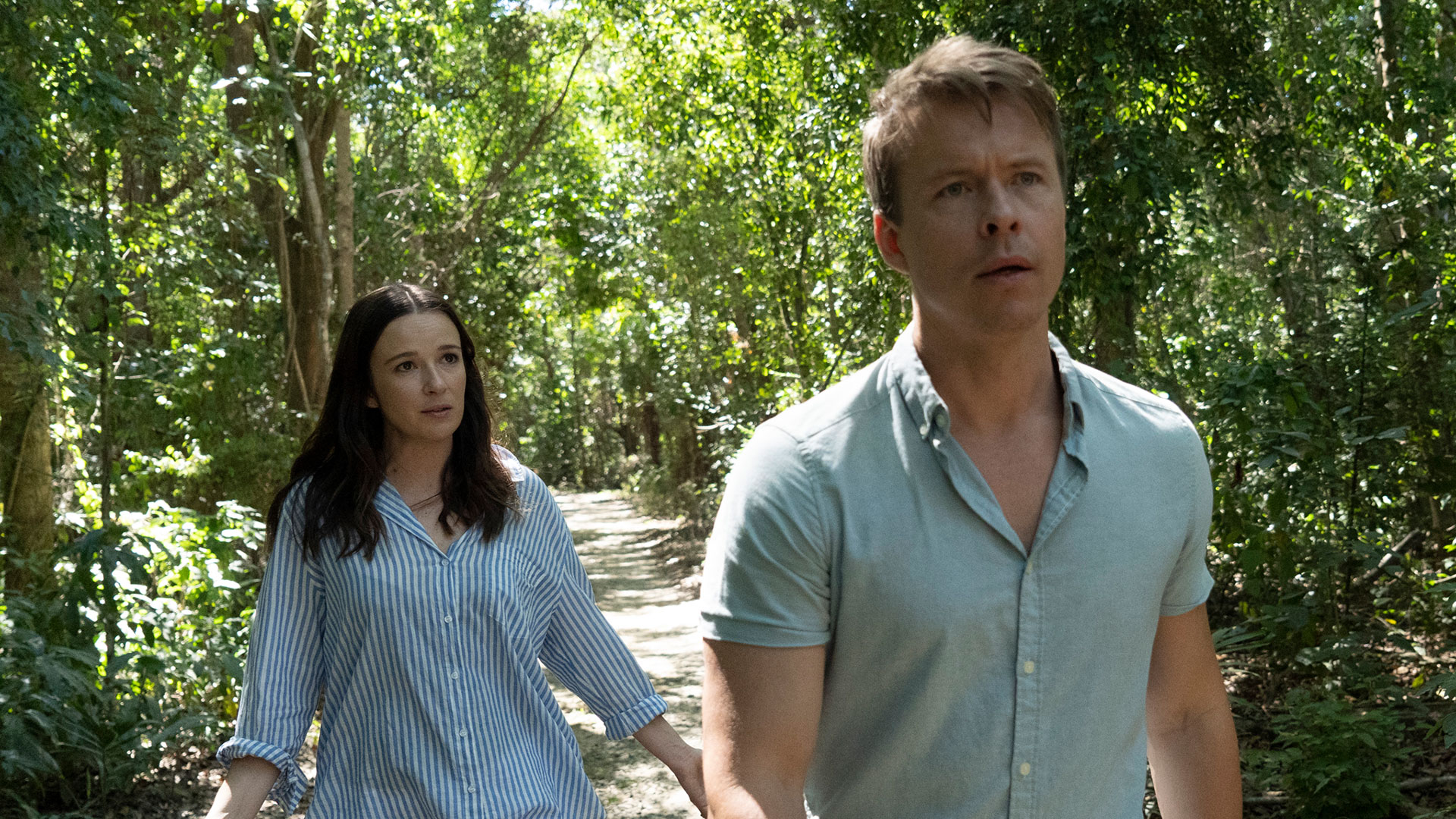 Savannah and Brad pack for their vacation with their young daughter Aria.  A client calls Savannah, and she promises Brad it will be the last work call before their trip.  Savannah won a week-long trip to the Koala Bay Nature Resort in Australia.  She vacationed there with her parents as a child, but Savannah hasn’t been back for years.  Neither of them remembers entering the contest, but they are happy to take the trip.  When they arrive by boat, the captain tells them the ferry is the only way on or off the resort.  At check-in, they meet the concierge, Jane, who walks them around the hotel.  There are numerous opportunities to walk and hike, lakes and pools, and a kids club.  If parents want to be alone for dinner, a movie, or any other activity, they can drop their children off at the kids club.  After the tour, Jane calls Pete to get their bags and show them to their cabin.  The three settle in, but Brad loses sight of Aria playing and begins to panic.  Savannah reassures him that Aria is exploring, but Aria doesn’t respond to his calls.  They run around their cabin and find Aria under the porch playing with a seashell.  Relieved, they tell Aria she can’t run from them.  Later, Brad and Savannah meet their cabin neighbors, Gabby and Nick.  They hope this trip will spark a pregnancy after years of trying.  Savannah and Brad have a dinner date with the couple that night and feel the tension between them.  The next day, Brad and Savannah want to go on a date, so Jane offers to take Aria to the Kids club.  Brad and Savannah have a great date, and Brad goes to the cabin while Savannah goes to get Aria.  Pete tells Savannah they have no record of Aria being there, and Savannah panics.  She has proof that Aria was there, but no one knows where Aria is now.  At first, they believe Aria is lost, but when someone sends pictures of the little girl, they know someone kidnapped Aria.  Savannah must look inside herself to find the culprit.

Congrats to Lifetime for providing a solid HMM mystery.  There were plenty of suspects with unusual behavior from the employees, housekeeping, and the police.  At one point or another, you will lose and gain trust for every character in the movie.  A sad but honest moment in this movie is during a scene with Brad and Savannah.  They start to turn on each other and play the blame game.  While some will look at this moment as counter-productive, it’s a real glimpse into what these parents go through.  By the end, you will feel justified and satisfied with the who and why.  Although, you may have mixed feelings about Savannah’s final reaction towards the kidnapper.  The actors gave solid performances all around.

Taking a Shot at Love – Review

Taking a Shot at Love – Hallmark – 2 hours and 0 minutes

Jenna loves the spirit of dance but not the competition, and that’s evident at her ballet studio in the town of Avon.  Her students will perform in the town Festival on the main stage.  And she couldn’t be prouder of them.  With this good news, bad follows quickly.  Two of her dancers left for a competitive dance team, and her landlord will raise her rent.  With less income and more cost, Jenna isn’t sure how to make up the difference quickly.  After a long day of classes, Jenna sits with her cousin Terry and have dinner.  Terry works with the New York Rangers, and his client, Ryan Cooper, suffers from a bad sprain.  Ryan trains with the team, but the coach can see Ryan is in pain.  If he doesn’t get better, Ryan will have to retire.  Ryan doesn’t know what to do because he tried acupuncture, stem cell injections, and laser treatment.  But nothing can make the pain go away.  Terry remembers Jenna had the same injury, but she dances without issue today.  Jenna tells Terry that Ryan needs to strengthen his smaller muscles to fix his ankle, not the bigger ones he trains in the gym.  The best way to strengthen those muscles is with ballet.  She recommends some great ballet teachers in New York.  Terry takes her suggestions, but he wants her to train Ryan and tells her it pays well.  Jenna continues to say no until she can’t convince her landlord to lower the rent.  Jenna calls Terry and tells him, ‘I will rehab Ryan.’  As she works on Ryan’s ankle, Ryan will work on her flexibility, confidence, and friends.

With a host of cute kids, inspirational quotes, and chemistry, this movie makes up in warmth what it lacks in engagement.  With scenes comparable to The Game Plan, this film brings laughs when Ryan tries ballet and feels it’s after-effects (FTC Affiliate Disclaimer).  While Ryan is consistently late, he isn’t selfish.  Ryan sees the spark in others and tries to nurture it.  Ryan sees boys bullying Felix because he takes ballet and steps in to tell the bullies that he takes classes too.  It makes them better at playing hockey.  When Jenna’s neighbor, Matt, admits to giving up the NHL draft to take over his father’s business, Ryan encourages him to get back into hockey, no matter what the position.  And Ryan tries to convince Jenna to expanded her business to competitions or a rehab facility.  Ryan is a nice guy who needs a watch.  This movie inspires you without needing your full attention.

Your life is a perpetual coffee commercial – Erin

Exactly how much money is plenty – Jenna

What did you do to me – Ryan 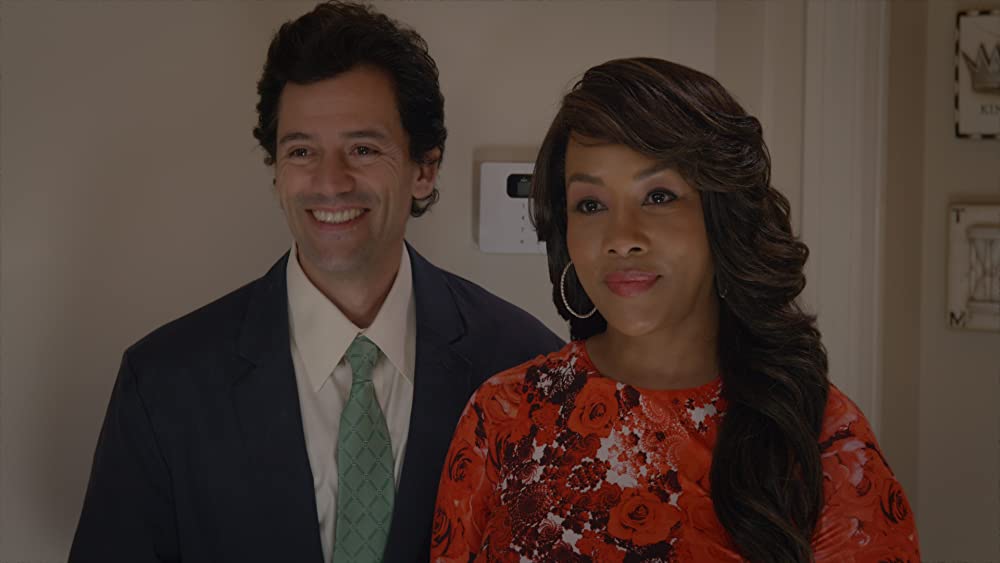 After getting her life back on track, Julie moves into a new home with her daughter, Maddie, with Charles’s help.  Charles is Julie’s old friend, and his great aunt owned the house.  When Maddie’s father left Julie, Charles helped Julie get back on her feet and find a broker position.  Charles walks Maddie and Julie around the home, but Maddie walks away from the tour.  Maddie walks into her room and finds a man standing there.  He asks her if the room is her, and she runs out to find Julie.  Charles explains that the man is Connor, the handyman.  Connor worked for his great aunt and will continue to work on the home for any of their needs.  While this reassures Julie, Maddie thinks Connor is creepy.  Their first night in the house, Julie believes she can hear something moving in the attic.  It keeps her up at night.  She goes to the kitchen and sees Maddie can’t sleep either.  Julie attributes their restlessness to being in a new home, and they try to sleep.  The next day, Charles tries to explain how the alarm works but Julie nor Maddie will listen.  At work, Julie’s friend, Annie, tries to get more information about Julie, her new home, and her love life.  Annie believes Charles is in love with Julie, but Julie tells her they are just friends.  Annie warns Julie to keep her guard up regardless.  The next day, Julie calls Connor about the noises in the attic.  As he checks it out, Annie comes over to visit.  Before she can knock on the door, TJ, Julie’s neighbor, stops her.  He wanted to make contact with Julie for days but keeps missing her.  As the days go by, weird things keep happening to Julie, like, her clothes go missing, her shower is dripping, and she still hears sounds.  But when someone goes missing, the truth will be behind a locked door.

While this movie tries to add mystery with a slew of suspects, the antagonist acts so weirdly it’s obvious who the bad guy is.  At some point, you will start to wonder if he is on drugs.  While the plot tries to play his behavior off as eccentric, a loyal Lifetimer can see the writing on the wall.  This plot is predictable, but it adds words of wisdom through Annie.  And there is a moment Julie catches Shane, Maddie’s boyfriend, in her bedroom in the middle of the night.  That moment is pure gold and saves the film.  Save this movie for a rainy day in the house.

I’m just trying to win you back – Charles

You have to advocate for yourself. If you don’t, no one else will – Annie

I know him well enough – Julie

So, you really are a gentleman – Maddy