The Madam of Purity Falls – Review

The Madam of Purity Falls – Lifetime – 2 hours and 3 minutes 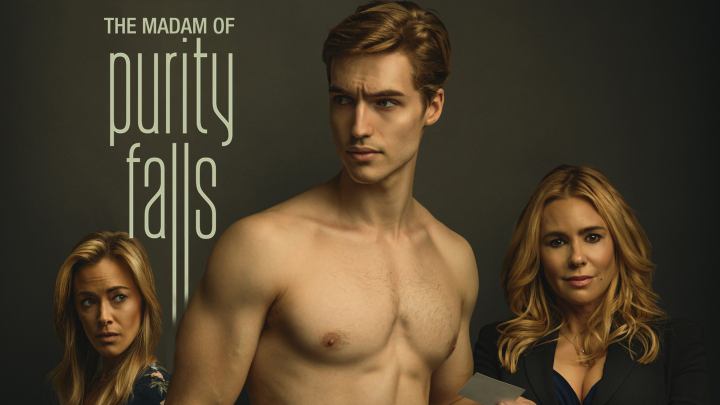 After her husband’s death, Nicole moves her son and daughter, Jason and Justine, to Purity Falls.  The teens openly discuss their unhappiness with the move while Nicole internalizes it.  While unpacking, Courtney introduces herself.  She is their widowed neighbor with a small landscaping company.  For extra money, she is a distributor for an organic cosmetics line.    She offers Jason a job if he needs it.  At first, he turns the job down.  After being in his new school for a day, Jason realizes he needs money.  He accepts her offer then sleeps with her.  Jason can’t believe his luck, he got a job and sex on the same day.  The next day, Courtney texts Jason the address of his first landscaping client.  He starts to work on her lawn but stops when the client makes a pass at him.  He runs to Courtney and she admits the truth.  The cosmetics parties allow her clients to pick their boy toys along with a fantasy. It’s his job to provide that fantasy and get the money.  Jason is not sure how he feels until a classmate tells him working for Courtney is good money.  When life gets too real, can Jason get out?

This movie tried to be too many things at one time.  First, it tried to be a typical Lifetime movie but fell flat on classic Lifetime tropes.  Second, it tried to be a mystery but didn’t provide clues to the real killer.  Just a big reveal near the end.  Third, it tried to be a sexy, guilty, pleasure.  But it is off-putting because the actors are playing teens.  While the overall performances are good, the script fills uninspired.

No need to worry. Everything looks good to me – Courtney

I wasn’t expecting that – Jason 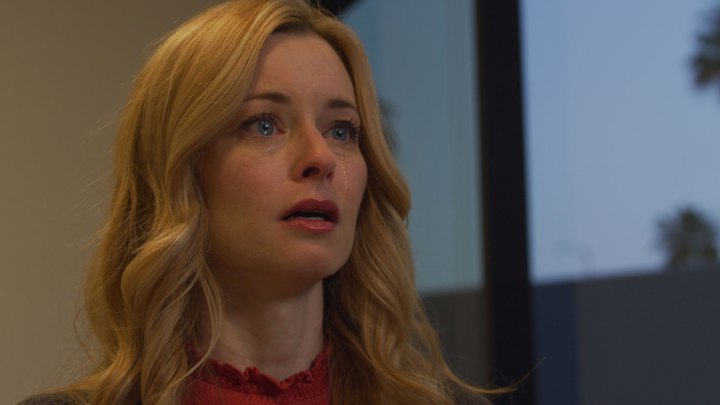 Melanie is having a difficult time managing her work/life balance.  She shows up to work late every day, misses her daughter activities, and rarely spends time with her husband.  When her boss, Ms. Reynolds, calls Melanie to her office. Melanie fears the worse.  She is taken back when Ms. Reynolds offers her a promotion with the ability to hire her own assistant as soon as possible.  Melanie gets a stack of resumes and believes she has found the perfect candidate until she meets Pheobe.  Pheobe is proud to be a strong, independent woman that wishes all women would come together.  Melanie hires Phoebe and everything is great.  Until Phoebe steps out of line and starts flirting with clients and Melanie’s husband, Alex.  When Melanie’s life falls apart like a house of cards, she believes Phoebe is her undoing.  Now, Melanie will have to convince everyone else that Phoebe has dark intentions.

This movie follows the Lifetime format with ease.  Melanie’s reaction and action to Phoebe’s misdeeds are expected.  Phoebe’s tricks to take over Melanie’s life have been done in past movies.  There is nothing new or exciting about this movie.  Even the “why” behind Phoebe’s actions is mundane.  With so much man-bashing, it’s difficult to understand if Melanie and Phoebe hate men or just themselves.  This movie is your classic background noise with every little substance.

Why not you? – Reynolds

I know. I’m trying to be your top candidate – Alex

Just think of me as your sister – Pheobe

In Broad Daylight – TV One – 2 hours and 0 minutes

Single mother, Jordan was kidnapped and pushed into a car in broad daylight with several witnesses.  She drove to the closest daycare with her perpetrator in pursuit.  During her kidnapping, Jordan screamed for a daycare working to take her son, Tyler, in a last-ditch effort to save him.  With Tyler safe, Jordan is in a fight for her life.  As word spreads in her community, Jordan’s family and friends gather to print flyers, coordinate searches with the police, and blast her disappearance social media.  They worry she was kidnapped by the same man who took Ophelia Baker.  Unfortunately, Ophelia was never found.  But Jordan’s cousin, Malik, believe the police should be looking into Jordan’s ex-boyfriend and baby’s father, Steve.  Malik has witnessed Steve’s volatile temper over the years and worries he reached his breaking point.  Jordan had a restraining order against Steve and only broke it to hand off Tyler.  While the family focuses on an unknown subject, Malik sets his sights for Steve.  Malik must work quickly because Jordan’s life hangs in the balance.  The first thing Malik has to do is break Jordan’s confidence to save her life.

Inspired by a true story, this movie doesn’t just discuss physical abuse but psychological abuse.  As Steve and Jordan date, he slowly isolates her from her family.  He moves her away, pushes her friends out her life, and convinces her to quit her job.  He does this under the guise of caring for her.  When she pledges her loyalty to him and gets pregnant, Steve tightens the reins.  Unlike most movies of abuse, Steve’s reasons for his control are laid out for the viewer.  Steve wants Tyler to have ‘the life he never had.  The acting in this movie is top flight.  As the relationship heads in a downward spiral, you can see the joy leave Jordan’s eyes.  She flinches at every kiss, touch, and hug Steve gives her.  Steve charms are on full display for the viewer.  It’s easy to see how Jordan fell in love.  As he goes from, loving to controlling to contempt in 2 minutes, you ride his roller coaster with her.  The hardest part to watch is Jordan’s family protecting Steve.  But before you get upset, remember Jordan hid her pain from her family.  Instead of saying Steve is abusive, she calls him jealous.  The lack of information leads the family to protect Steve from the police.  For a 2 hour movie, the character development is incredible.  We all know someone like Jordan.  This draws the viewers in and makes you want to watch twice.  BTW, do you know any Barbeque Babies?

Barbecue babies. Its a thing and its dangerous – Georgia

Trust in your family. You know were gonna always be here for you – Malik

No relationship is perfect – Jordan

Find, shop for, and watch TV One movies on iTunes (FTC Affiliate Disclaimer)

Sins of a Father – Review 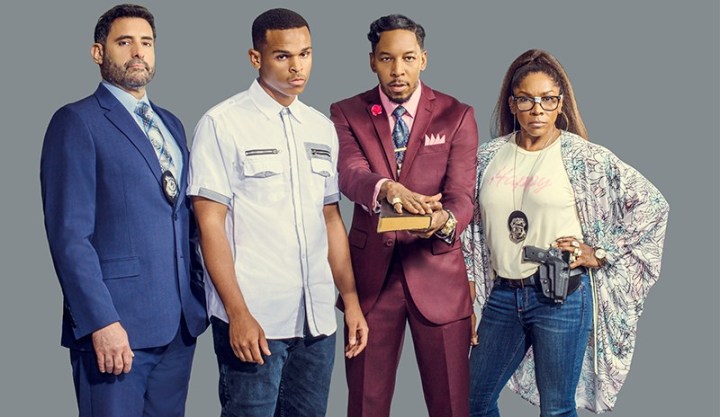 Detective Felicia sits across from Robert Banks, a young, high school kid with a bright future.  Until he shot and killed his stepmother, Karen.  Looking at Robert’s quiet demeanor and fear, Detective Felicia and her partner, Detective Perez, know something more has to be going on surrounding the murder.  But they can’t get Robert to talk.  Felicia attempts to wear him down but gets nowhere.  Then, Ms. Banks, Robert’s mother gives them some insight.  She believes Robert’s father, Pastor Clarence, is the puppet master.  Years ago, Clarence raped her and she gave birth to Robert. Ms. Banks’s parents believed that the rape was a punishment for her sexuality and Robert was her penance.  Years later, her parents believed her sexuality made her an unfit mother.  They paid Clarence’s legal fees to take Robert away from her.  From that moment on, Robert was under the control of his manipulative father.  Felicia has to fight against Robert’s familial beliefs so he can save himself from the death penalty.  He just has to give up his father.

Reminiscent of the Cinnamon Brown story, this movie is a case of nature vs nurture.  Once Clarence had his son, he could rebuild Robert in his own image.  Robert’s loyalty to his father knows no bounds.  From money to love to women, Robert puts his father’s needs first.  But Clarence’s loyalty is only focused on himself.  Clarence doesn’t see the 7 deadly sins as a warning, he sees it as a checklist.  The 10 commandments aren’t rules, they are an instruction guide.  There is nothing this Pastor won’t do to win.  While the Pastor’s behavior is shocking, the overall plotline is ok.  Also, the actors create top performances with an ok script.

That man is a manipulative, con-artist – Ms. Banks

TJ, don’t play me. You and I both know the place he’s coming from– Karen

Everything was about money with them – Robert

When are you gonna man up? – Clarence