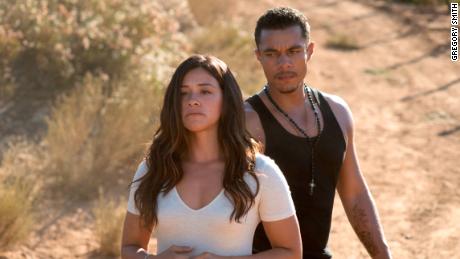 Gloria Fuentes finishes her make-up artist job at LA Fashion Week and heads straight to Tiajuana to see her best friend Suzu.  Suzu has signed up for the Miss Baja California pageant and Gloria happily agreed to do her make-up.  Before the pageant, Suzu wants to go to the Millenium club to impress the important people judging the pageant.  While at the club, the Chief of police gets handsy with Gloria and she excuses herself to the bathroom to get away. In the stall, she hears men coming out of the air ducts.  She tries to hide but they break down the door.  Lino notices Gloria is an American and tells her to forget their faces, keep her mouth shut, and then gives her seconds to get out of the club.  Gloria rushes to find Suzu and ends up in a hail of gunfire.  Suzu and Gloria are separated and Gloria waits for her at a nearby diner.  The next morning, with no signs of Suzu, Gloria approaches a police officer for help.  The officer offers to drive her to the station and listens to her story.  He pulls over for lunch, leaves the car, and enters a building.  Moments later, 3 men exit the same building and pull Gloria into a van.  They take her to Casa Rosita and she is face to face with Lino again.  He questions her and takes her identification.  She pleads her case and he offers to help her find Suzu.   But only if she does something for him.  Until he is done with her, he will keep her IDs.  He puts her in a car with a phone.  He directs her where to drive, then tells her to get out and meet him at the top of a hill.  Once on the hill, she watches Lino blow up the house she parked near.  Gloria is devastated but tries to hold her composure.  Lino takes her back to the pageant and tells her to enter.  She will have a shadow and must keep her phone with her as well as powered on at all times.  She doesn’t want to be in the pageant.  She just wants Suzu.  So she runs away the first chance she gets.  She finds two Americans to help but they put a bag over her head and put her in handcuffs.  She learns the 2 men are DEA agents and she helped Lino blow up a DEA safe house.  She killed 3 men inside.  They have enough intel to put her away for 30 years.  But they offer her a deal.  If she puts a tracking device in her phone and provides info on Lino’s next big deal, they will let her go and help her find Suzu.  She heads back to Lino.  With one drug run, her world will go into a tailspin.  She will expose all the monsters and make a deal with a devil she never knew.

Based on 2011’s Miss Bala, this movie is non stop action with all the twist and turns of a soap opera (FTC Affiliate Disclaimer).  Between Lino and the DEA, you are never sure who the biggest threat is to Gloria’s safety.  There is a moment that will leave you in pure shock and another that will leave you gasping for air.  And when you feel you know all the angles, you are hit with another revelation.  This has the excitement of John Wick with the drama of Widows.  And you will be begging for more.  See this in a Dolby theater today.

You can not talk to my friend like that – Suzu

We are gonna be really good here, you and I – Lino

Are you listening – Jimmy