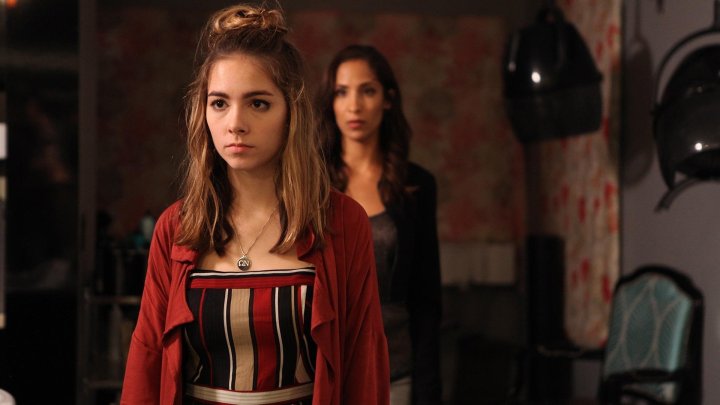 Aya is so focused on expanding her business, she plows into Taryn.  The two apologize and go their separate ways.  Aya goes into her salon and Taryn goes to the corner and waits.  Aya sparks a conversation with Taryn and feels so saddened by her life.  Taryn lost her family in a fire and grew up on foster care.  Then, her online love Steve disappeared after she moved across the country to be with him.  At that moment, Aya sees Taryn’s Omega Nu necklace.  Aya is a member of the sorority and Taryn was a member of the NYU chapter.  Since they are “sisters”, Aya tells Taryn she can stay with her until she gets back on her feet.  This good deed will have dire consequences including a robbery, cut brakes, and a dead body.

Never turn your back on crazy.   Especially Taryn.  Experienced Lifetime watchers will be able to drive a truck through the holes in her a backstory.  This movie is funnier than it is scary.  Taryn’s first attack on an entitled brat feels deserved.  As the story develops, nosy people are picked off one by one.  While the attacks are well-developed, the overall reason for them falls flat.  You hope for a bigger connection between the two as a payoff.  But it just doesn’t happen.  With so many Lifetime cliches, this movie doesn’t add anything new for the viewers.

Well, if the mountain won’t come to Muhammad – Lauren

God, I am so glad you ran into me – Taryn

It’s easy to ignore a phone call. It’s harder to ignore someone standing right in front of you – Aya 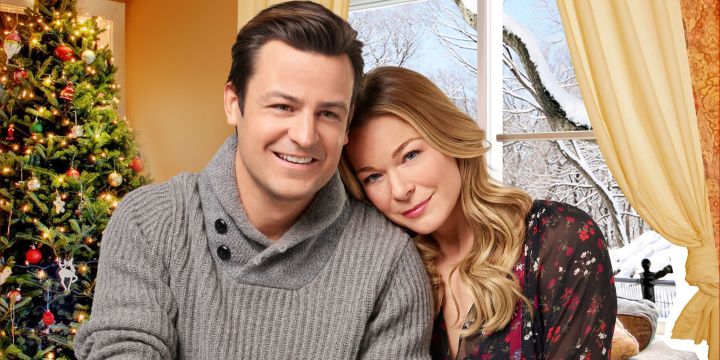 Eve, a superintendent, is coming back to her hometown to evaluate the district’s school budget.  She has to find ways to get the district out of the red.  Eve presents 3 plans and the board goes with eliminating music and art to save money.  But the more time Eve spends with her family and Liam, she starts to find her love of music since her dad died.  Also, Liam is the local school’s music teacher.  Her plan will cost him his job.  So she decides to finds another way.  Eve and Liam will create Christmas under the Stars.  Not only a benefit concert to save the music and art program but a way to bring back the love Liam and Eve had for music.

Another winner.  It’s funny to hear Liam make fun of the “bump into someone one, spill coffee on them, and fall in love” story.  A classic Hallmark setup.  But the love between Liam and Eve take a back seat for their lost love called music.  Liam hasn’t performed his own songs in years and Eve hasn’t sung since her father died.  It’s finding this love for music that truly brings everyone together.  Even Eve and her stepfather John.  Proving that love can stretch beyond people and music has no bounds. And yes LeAnn fans will get to hear her sing.

Wow, it took you an hour and a half to bring up my love life. You’re slowing down on me – Eve

It’s not up to me. Its the universe – Liam 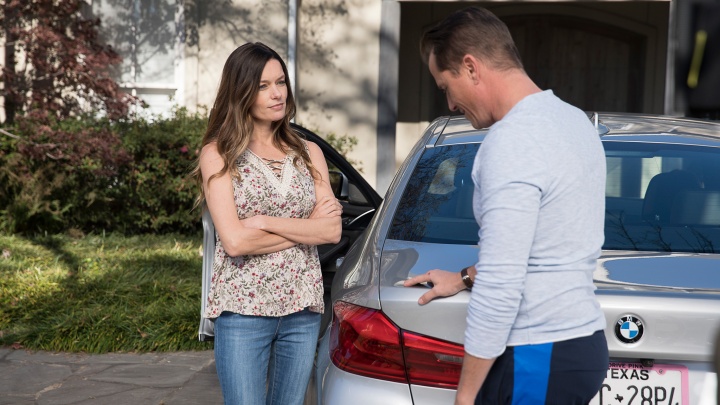 While at a bar, Brady meets Vanessa.  She is smart, funny, and beautiful.  He falls in love after a few dates.  However, she comes up to him the next day and breaks off their relationship.  Vanessa decided to reconcile with her husband Kevin and get her family back together for the sake of her children.  Brady tries everything to keep her close but nothing works.  So he employs another tactic.  When he first met Vanessa, he lied about is age.  He is a senior in the same high school as Vanessa’s daughter Anna. In order to get close to Vanessa, Brady starts dating Anna.  Brady learns that Vanessa lied about her name, the same way he lied about age.  But Brady doesn’t care.  He just wants the love of his life.  And he will kill to get her back.

This movie is reminiscent of The Boy Next Door with a touch of Single White Female (FTC Affiliate Disclaimer).  No matter how hard Brady tries, he is rejected.  But one rejection takes him from being sweet and annoying to creepy and violent.  Stephane (a.k.a Vanessa) will have to become a stalker to find the kink in Brady armor. With the crazy plot twist, it’s still not enough.  This movie may be fast-paced but it’s been done.  So keep it as background noise for choirs

I want to be able to put this ring back on, forever – Kevin

If you were serious about the marriage, you wouldn’t have been with me in the first place – Brady 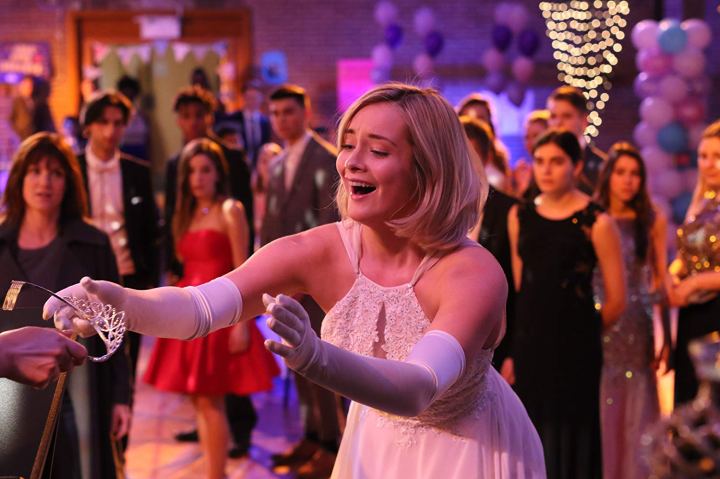 Mia is dealing with a lot.  She is starting a new school.  Her mom Julie is one year sober and teaching at her school.  And her mom’s best friend Joanne is missing and presumed dead.  So, when Mia is embraced by Amy, the most popular girl in school, she does everything to keep the friendship on track.  So, when Julie tells her to stay away from Amy, Mia become defensive.  But Mia doesn’t know that Amy has one focus: become Prom Queen.  She will lie, cheat, corrupt and even kill to be on top.  When Julie becomes her only hurdle, Mia becomes an unwilling pawn and a victim.

Amy knows no bounds and all for a piece of plastic.  Unlike most Lifetime movies, they manage to make this bad guy unlikeable.  You laugh when Amy outsmarts others, but when she is disrespectful to her hardworking mother, you instantly want pig’s blood to drop on her.  It’s hard to believe how many adults gave into her just to keep a job.  But you have to wonder, can this work in real life?  Let’s hope not.  While this is fun to watch, it is a bit predictable.  This one is good to watch if you need to kill a few hours.

You don’t get it. I just want to finish school and not deal with her – Sophie

Mom, she took me in. I was the total new girl. She didn’t have to do that – Mia

Be sure to show your work – Amy 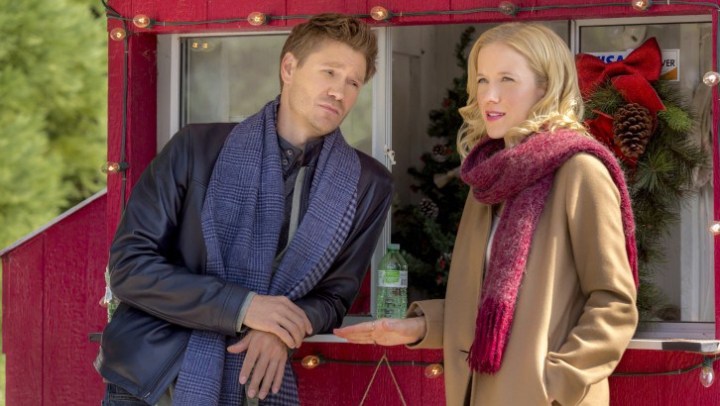 Maggie is going full steam ahead as the new head producer of Julia Wise TV show.  And her first action is to shoot the Christmas special – live.  Julia is nervous about a live show but Maggie assures her there will be teleprompters guiding her every step of the way.  Nevertheless, when the network president hears about the changes, he is worried.  So Julia asked her son Danny to help co-produce.  The first 2 years after Julia’s husband died, Danny produced the show and it got the highest ratings ever.  So the network wants them to reproduce that with Maggie’s idea.  Maggie is shocked but Julia reassures her this isn’t a demotion, just some help.  Danny’s first change is to add taped segments to show during the live show.  Maggie thinks this defeats the purpose of being live but accepts it.   So they will go across the country on a road trip trying to find Christmas spirit and what means to others.  When Maggie sees Julia crying over a picture of her 3 sons, she has an idea to get Julia’s Wise Men back together.  Can Danny, Derrick, and David let go of the past for their mother?

This is the first stand out movie of the Hallmark season.  Even though the love story between Maggie and Danny develop throughout the movie, it is not the focal point of the story.  The focal point is the connection between the mother and the brothers.  How could a woman who not only loves Christmas but has a show based on it, lose the connection with her sons on the holiday?  The question is answered when each son tells his side of events.  Danny (oldest son, second adopted), Davis (2nd oldest, 1st adopted), and Derrick (youngest, 3rd adopted) reveal the truth of their past together to Maggie and help Maggie connect to her family as well.  This is one to record for the future.  It will become a holiday favorite and bring a tear to your eye.

The idea was already there. I’m just helping it along – Maggie

I just did it, instead of arguing about how to do it. Have you guys tried that lately – Derrick

How does that go? Ah. It’s better to ask forgiveness rather than permission – Danny

I feel like George Bailey in It’s a Wonderful Life. Merry Christmas you old farmhouse – David

These are my three Wise men – Julia 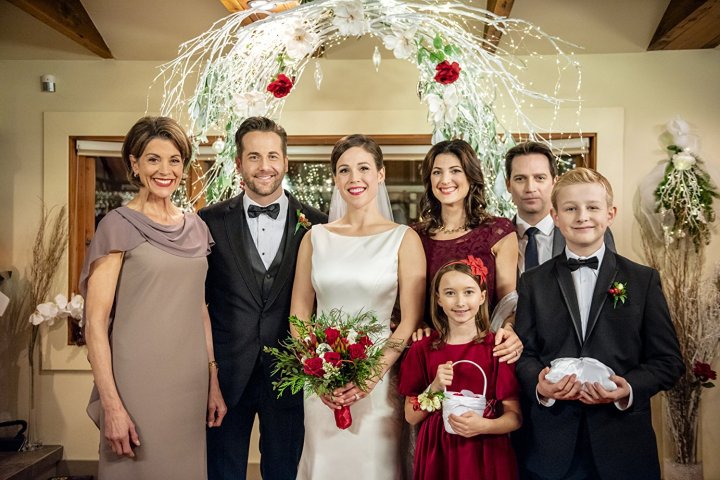 Christmas has a new meaning for Merideth after finding her father’s family.  Since then, she has met the love of her life, got engaged, and been accepted by her father’s family – all on Christmas.  So it’s only right that she gets married to Ian on Christmas day.  Both Ian and Merideth are excited for the day.  But it does come with complications.  First, Ian just can’t seem to find the words for his vows.  No matter how hard he tries, it just isn’t good enough.  Second, Margaret (Merideth’s father’s widow) keeps adding people to the guest list.  When Merideth reminds her of the wedding venue’s size, Margaret has one solution: Get a bigger venue.  Just as Ian and Merideth thought things couldn’t get tougher a third surprise enters, Merideth’s Uncle Charlie.  Merideth believer her mother was an only child but Charlie has pictures to back up his story.  Merideth must reconcile her mother’s past to accept her uncle.

Based on the Father Christmas Series by Robin Jones Gunn, this movie continues to reveal more secrets with each new chapter (FTC Affiliate Disclaimer).  The big difference is Merideth’s in Magaret’s position.  Merideth is worried that Charles is a liar or after money and fame.  This helps her connect with Magaret on a deeper level.  Merideth’s new sense of family and loyalty has shifted since the last movie and that character growth is refreshing.  Also, seeing Merideth’s internal struggle is a strong break away from the instance acceptance normally displayed on Hallmark.  Understanding doesn’t happen overnight and this fact is on display in this movie.  Don’t miss the next chapter in this movie series.

You know what they say, third times the charm – Ian