Hailey Dean Mysteries: A Will to Kill – Review

Hailey Dean Mysteries: A Will to Kill – HMM – 2 hours and 0 minutes

While reconciling her past and looking into Will’s murder, Hailey is intrigued by a missing classmate named Emma.  She was last seen the night Will died.  As a college news reporter, Emma has a list of enemies.  And her personal life wasn’t easier.  While Hailey barely knew her, she believes there is a connection between Emma’s disappearance and Will’s murder.  Hailey has her doubts about the case until a fake social media account appears, a mystery cousin was spotted the day after the disappearance, and she is almost run over.  Hailey knows this means she is close to solving Emma’s case but is she close to solving Will’s.

Based on the Hailey Dean Mysteries by Nancy Grace, this will finally answer the question Hailey Dean fans have had since episode 1.  But don’t worry.  This isn’t the end of the series.  With this good mystery, you also get a fun subplot about Fincher relationship and his strong ties to Hailey.  While this is a good story, it’s not the strongest mystery.  This final part of a three-part episode had fans predicting perpetrators since the first part.  And your prediction was probably right.  So watch this movie for the “why” not the “who”.

But I like you for you. Not for the things we do together – Hailey

For what its worth Hailey, I am proud of you no matter what happens – Jonas

I promise not to be afraid of you – Clyde 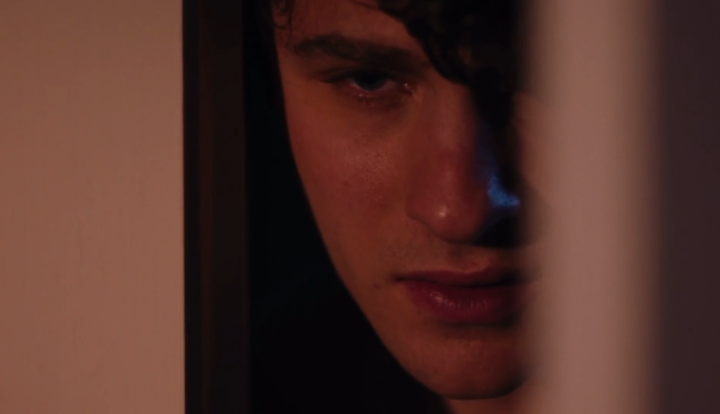 A fun family day at the beach ends in a panic when Sara and Jake heard their son Ian screaming for his brother Matt.  Decades later the family believes Matt was swept at sea.  And the feelings of lost come back during Ian’s wedding, especially since his father Jake died a few weeks prior in a car accident.  After learning the will is to be split between Ian and Sara, she finds a young man on her front lawn. He tells her he is Matt and he came to find his real mom.  He explains he was found ashore after suffering a seizure, put into foster care, and then adopted.  His adoptive parents finally told him the truth and he came looking for her.  Now he is ready to reconnect and be a part of the family.  While Sara is accepting, Ian is cautious.  But Matt isn’t the only family member with a secret.

Slow build up, strong climax, with a lackluster ending.  You know something is off about Matt but you are not sure why he is in their lives.  As the plan reveals itself, it seems so ordinary.  There is one big reveal but it just isn’t wow enough after several murders.  While this movie answers every question you have about its characters, you don’t need to cancel plans to watch it.

You don’t believe me – Matt

I’m too young to be a widow – Rachel

Hope is a free-spirited dance instructor at DanceTopia.  While she teaches children, she also helps couples prepare for the first dance at their wedding.  As she is hoping to get a loan to buy the dance studio, she is offered to audition for an assistance choreographer job in London.  She is now questioning where she should be in life.  Eric is preparing to be the head of a brokerage firm after his father leaves the company.  He will not be alone.  His fiance Adriana’s father is stepping down too.  She dreamed of running the firm since high school.  And doing it with her future husband is a bonus.  With his wedding and takeover just days away, Eric is wondering if its all enough for him.  He had a double major in college: theater and finance.  While he followed finance, his heart was in the theater.  To make the wedding smoother Adriana and Eric’s overbearing mothers sign them up for dance class.  With Hope.  As Hope and Eric work together, they confide in each other and connect.

The love story has a steady pace to allow you to believe the love is real.  And the divide between Eric and Adriana allows you to see the issues without hating Hope for their doomed relationship.  This movie follows the Hallmark formula to a tee, so you watch it for character development and the jokes.  The mother’s meddling will have you yelling at the screen but the wisdom of Eric’s father will bring you joy.  And don’t forget to spot the Hallmark card!

Peter was perfection on paper. Reality was something different – Hope

Who is he guarding? Is Rihana inside? – Eric

Tell me these nerves subside – Cassidy