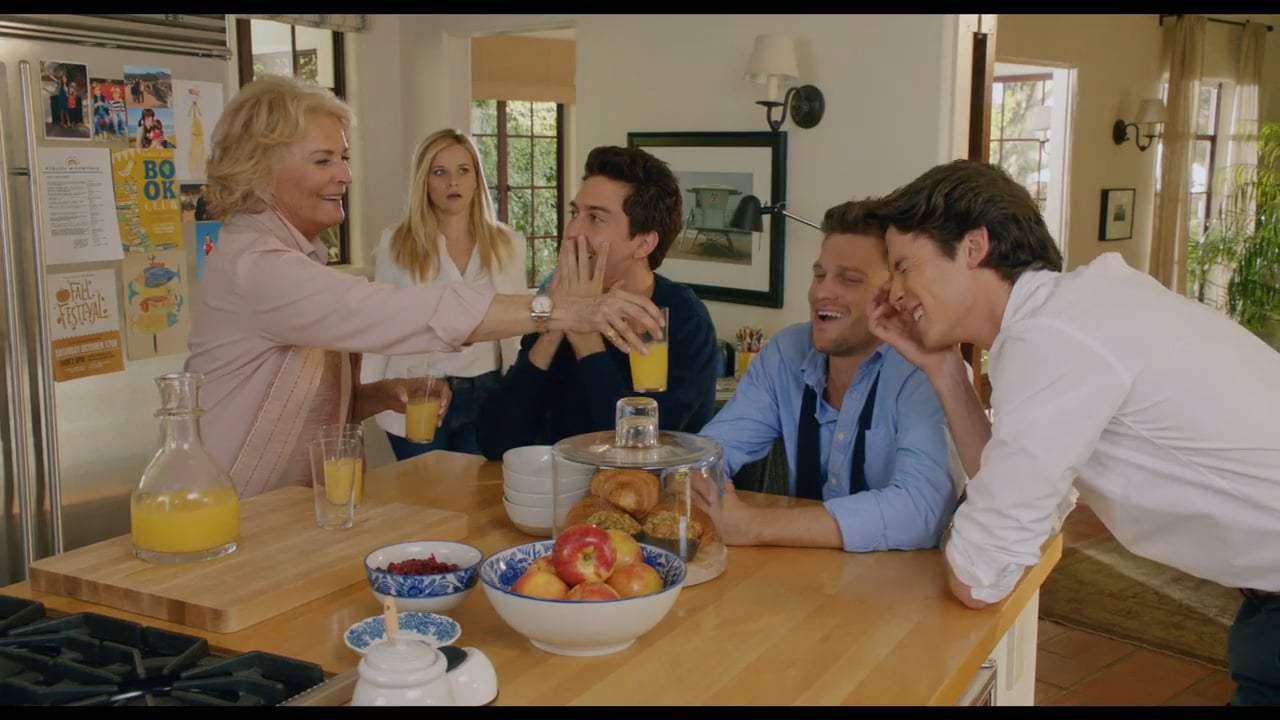 Alice is the daughter of an award-winning director and a starlet.  While their marriage didn’t last, John Kinney connection to Alice held strong.  So a few months into her separation, Alice moves into her father’s home with her two daughter’s Rose and Isabelle.  While she is displaying a brave face, Alice is heartbroken over her failed marriage with Austin.  Austin, music executive, has little time for family with his hectic life but misses Alice and his girls dearly.  In a means to help, Alice’s friends take her to dinner for her birthday.

Harry, Teddy, and George are a director, actor, and writer respectively.  After several meetings are pushed back with movie executives, their money has run out and they need a place to say.  Harry assures the guys he can secure a place and the 3 head to a meeting.  At the meeting, the three learn that a well-known producer loved their short film and he wants to produce a longer version.  The 3 are ecstatic and decide to go to a bar to celebrate.

Harry and Alice meet at the bar and hit it off.  Alice and her friends bring the Harry, Teddy, and George back to Alice’s place.  After a not-so-memorable night, Alice tries to escort the 3 men out.  But she is discovered when her mother brings back her daughter’s early.   The three men sit down and discover that Alice is parents are in their dream field.  Alice introduces George to her father’s work and notes.  Teddy is inspired by her mother to act.  And Harry is inspired by Alice too … well, you know.  All three men love being in Alice’s home.  However, Teddy and George worry that if Harry screws things up with Alice, they won’t have anywhere to live.  And Alice loves the connection the three men have on her family, but when another unexpected rival comes, the testosterone will fly.

Home Again is classic Reese Witherspoon.  It doesn’t rely on vulgarity to be funny, but the awkward moments we all have in life.  There are continuous power struggles through the movie.  Whether it’s between the 3 men, Alice’s alpha males, or within Alice, it will make you laugh.  This is a quick escape movie for 13 and up.  If you see it full price, you won’t be disappointed.  Now what this film was missing was more Candace Bergen.  Her comedic timing is not utilized enough.  Another downfall is the movies 10-minute intro into Alice’s background. It is unnecessarily long. And don’t be fooled.  This is a romantic comedy, but it doesn’t have a typical ending.  But the ending is truthful and satisfying. And that is it’s true saving grace.

This is your day, your year. Get ready Alice. The world is yours – Alice

Everybody is, son. We’re in LA – Lillian

Just tell me when you tell him. Because I want to be out of the country – Teddy

Do I look worried – Harry

I miss you – Austin

Félicie and Victor were left at the orphanage on the same day. The two have bonded and vowed to break out together too. Félicie, an aspiring ballerina, dreams of dancing on stage. She has heart but no training. So, when Victor shows her a picture of the Best Paris Ballet school, the Paris Opera Ballet, she can’t wait to find it. Victor, an aspiring inventor, builds with passion and purpose. His latest invention, The Chicken Wings, is part of his escape attempt #462. And this time, it works. The two “fly the coop” and head to Paris. But within moments, they are separated. Victor yells that no matter what he will be on that bridge tomorrow to meet her. Walking alone in the streets of Paris, Félicie sees the Paris Opera Ballet. She quietly walks in during a performance and is transfixed. She knows she has found her calling. However, security has found her and labels her a thief. Before she is arrested, Odette stops security and tells Félicie to leave. Instead, Félicie follows Odette to her home. Odette is the caretaker of the ballet and Régine’s Home. After several nagging questions, Odette offers to let Félicie stay in her quarters until she gets on her feet. While helping Odette clean, Félicie walks in on Camille, Régine’s daughter, ballet dancing. Camille lets Félicie know that she will get a letter to join the Paris Opera Ballet because a teacher loves her mother restaurant.  When Félicie tells her she wants to join, Camille is disgusted and call Félicie a nobody who will never dance with her.  Then throws Félicie’s music box (the only gift from her mother when she was left at the orphanage) out the window.  Félicie goes outside to see the music box broken and is furious.  The mailman approaches her and asks if she is Camille.  Félicie sees it’s the letter from the school and says yes.  She walks into the school hoping she can hide her lack of training, her real life, and her name to obtain a dream.  She can’t wait to meet Victor and tell him.  And when she does, he gives her some great news too.  He is working with well-known architect developing one of the most famous structures in the world.  If he succeeds, he will be learning from one of the best in the world.  And if she succeeded in school, she will get a part in the Nutcracker and be admired by all in Paris.

You can reach your dreams if you just Leap!  This story of reaching for your dreams, despite your upbringing, is not a new story.  It’s like most Disney stories.  The difference is its ballet twist with a little Karate Kid training and a Dance Moms’ trainer and stage mom thrown into the story.  There is plenty of joke for parents, it’s not enough to keep your interest.  But children will fall in love with the dancing and budding love story between Victor and Félicie.  So, if you have a young one, take them to the matinee and get a few giggles.

Dreams are not reality – Mother Superior

I hate bells so much – Victor

Slow down. I can’t run that fast. I have weak ankles – Luteau

You have the energy of a bullet, but the lightness of a depressed elephant – Mérante

I am a cleaner and you are an irritation – Odette

This thriller will keep you on edge as Frank and Jack drive with a dead body in the trunk while devising a plan to get rid of it.  With every encounter Jack’s demeanor, walk, and even the sound of his voice changes.  He feels the urgency as the body starts to decompose and exposure is imminent.  As Jack continues down this road, you wonder if he is in control of the situation or if his strings are being pulled.  In the end, all things will become clear to Jack.  But will this change him or just make him what he truly is.  This journey leads Jack and Frank to come across the best and the worst people you will ever meet from different walks of life.  From retirees, newlyweds, a vet, and the heartless, each character is another link in the chain,  not just script fillers.   However, the only downfall is that the backing track often drowns out whispers or “fly on the wall” conversations.  So, be prepared to want to turn up the volume or rewind to hear it.  Overall, if you are crime show or thriller fan, this is one to watch.