Ten days before the Berlin Wall falls, Lorraine is given her mission. The night before an agent named James was killed and a watch containing a list was taken from him.  She must find the list (on microfilm) which contains the name of all the current spies in the field. It must be recovered soon because one spy is listed as a double agent. They need the list to save every operative in the field and to stop the double agent. Her point of contact in Berlin is David.  But Lorraine is worried because the moment she lands in Berlin, she is made by the KGB and must fight.  She is quickly discovered by David who gives her the 10 cent tour of Berlin.  David is quick to exchange anything for information.  Now Lorraine recalls the events of the past 10 days with her boss in an interrogation room.  By the end, her story will include a man with a photographic memory, a beautiful French operative, an ice pick, and a corkscrew.

Based on The Coldest City by Anthony Johnston, this thrill ride starts at the very beginning (FTC Affiliate Disclaimer).  It has the right dose of kick-butt action with dashes of humor when needed.  As Lorraine discusses not having the right outfit before a battle or comment on her contact’s balls, it makes for an easy laugh in tense situations.  Some of the fight scenes are a spectacle to see because everything is a weapon.  There is a not sweeping shot of the fight scenes, just up close and personal.  This is purposely done to make the audience feeling each punch, kick, stab, and gunshot.  Also, the hand to hand combat makes things seem more realistic.  This is a fun watch for any action fan.  Be warned that all of Lorraine’s fights are in the trailer but not at full scale.  Are the best parts of the fight scenes in the trailer? NO.  However, you will anticipate them as the scenes play out.  Anyone younger than 16 should stay home and no need to stay past the credits.  There could be a part two but we must see how this movie pans out with audiences.  See it with the understanding that you may need to see it twice.  It goes fast and there are a lot of twists and turns.

Your not the best, are you? – James

Would it make you more comfortable if I stood on the other side of that mirror? It’s a bit crowded back there. – CIA Agent

Well, shall we began – Lorraine

In 2012, The Stark building was highly damaged after the battle with Loki and his drones (FTC Affiliate Disclaimer).  Toomes and his team started the cleanup but are told to pack up and go home by the US Department of Damage Control (DOCD).  Toomes asked them to let him and his crew stay.  He has his business, his family, and his crew’s family all on the line with this contract.  The DODC refuses to hear his pleases and asks him to leave.  Toomes becomes angry because the team is run by Stark Enterprises.  He believes that the big guy is shutting out the little guy.  So, he and his crew keep some of the alien technology to build weapons to sell to criminals.

Last year, Tony Stark saw a promising young hero on YouTube and tracks him down (FTC Affiliate Disclaimer).  He has Happy pick him up and brings him to Berlin as his wildcard in the Avengers’ Civil War.  Peter takes handheld video of the action and can’t contain his excitement.  Once the battle is done, Tony allows Peter to take the suit but he will be monitored by Happy.  He won’t know when his next mission will be but when it comes, Tony will tell him.  A few months later, Peter hasn’t heard from anyone although he reports to Happy every day.  He wants to have more freedom and work with the Avengers on a mission.   While he is being a friendly, neighborhood Spider-Man, he is in high school.  Peter’s friend Ned leaks that Peter is working for the Tony Stark internship program and knows the Avengers, including Spider-Man.  Liz, captain of Peter’s debate team and his crush, has a crush on Spider-Man.  Hearing Ned’s leak, Liz invites them to her party and asks Peter to bring Spider-Man.  At the party, Peter doesn’t want to change into Spider-Man but when the bullying starts, he goes outside to put on his costume.  When he is outside, he sees something blow up and goes to inspect.  There he sees weapons being sold, which he has only seen once before during a bank robbery he stopped.  When he interrupts the deal, everyone runs off.  Just as he catches up, he comes face to face with the Vulture.  After going toe to toe with the vulture, Peter is ready to take off the “training wheels” and go into “kill mode”.

Out of all the Spider-Man movies, this will become a fan favorite (FTC Affiliate Disclaimer).  Don’t worry, you will not have to go through another Peter Park/spider bite/dead uncle backstory.  This movie only mentions the backstory for 5 seconds when Peter explains his powers to his best friend Ned.  The plot centers around Peter coming into his own as a man and his own superhero with the help of Iron Man, Happy, and Ned.  While the 3D visual effects for the Washington Memorial scene will make you dizzy, the computer-generated Spider-Man hasn’t gotten better.  It’s easy to see when the actor is replaced with CGI.  Although, a great aspect of this movie, is it having more than one comic relief.  Michelle, Tony, Happy, and Ned are great comic relief in a time of crisis for Spider-Man.  While most the dialog was fun and strong, the conversation between Liz’s dad and Peter will make your heart beat faster.  For Marvel fans, be sure to look for easter eggs of Stan Lee, Venom, and a potential infinity stone.  If you can stand heights, see this in 3D.  And stay to the very end because your patience is its own reward.  Sit back and enjoy this next installment in the Marvel Cinematic Universe.

Let’s keep it. The world is changing. It’s time we change too – Toomes

We have thin walls here – Happy

If she finds out people try to kill me every single night, she won’t let me do this anymore – Peter

Seriously, yes, you will not regret this – Mason

I just saved your life. What do you say – Toomes

I’m not obsessed with him. Just observant – Michelle

Man in the chair. Yes – Ned

You say sorry a lot – Liz 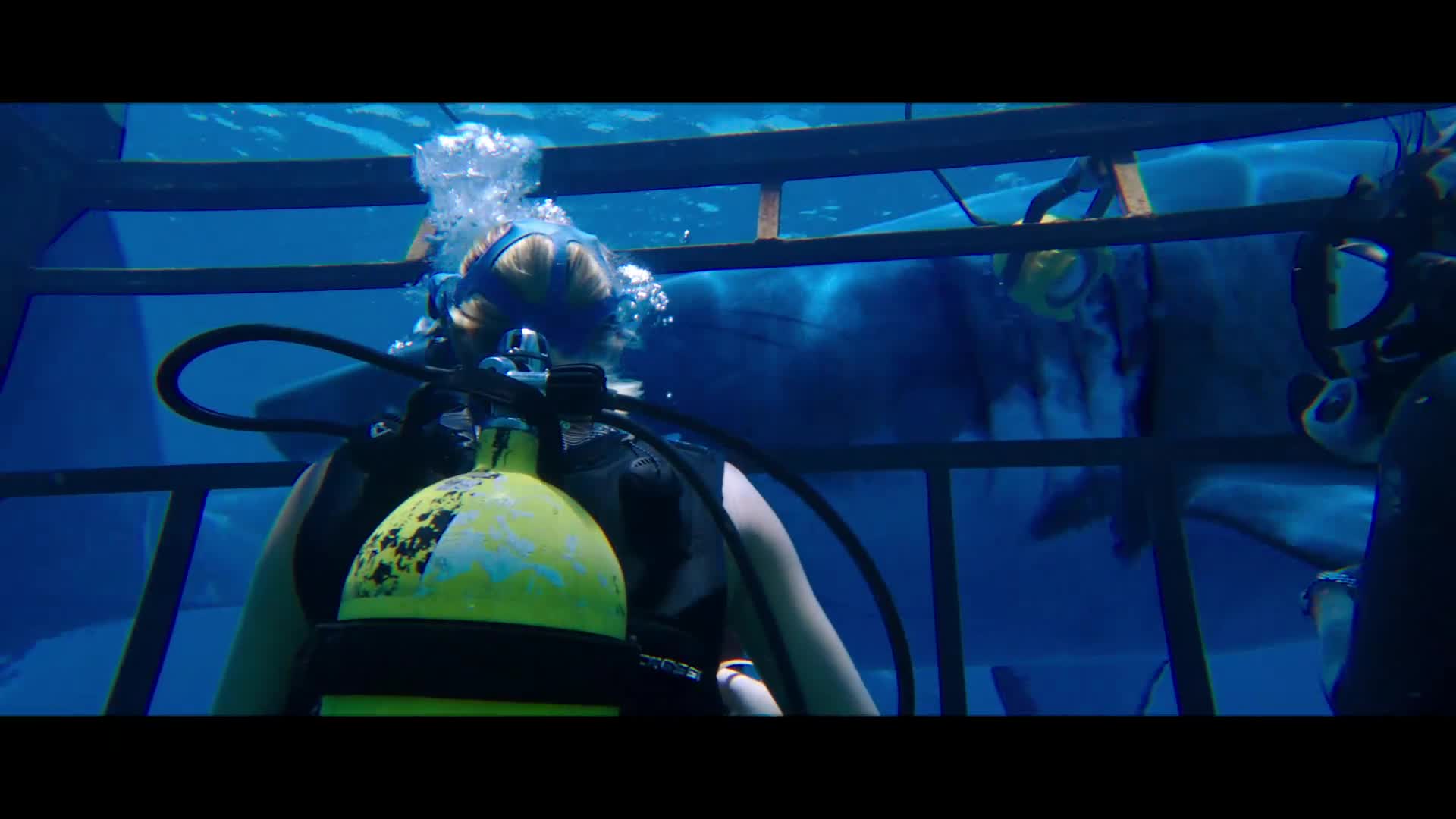 Lisa and Kate are two sisters on an idyllic trip to Mexico.  Lisa asked Kate to come after her boyfriend Stuart backed out.  Later, Lisa reveals that Stuart couldn’t come because he broke up with her for being too boring.  Kate encourages her to be more adventurous and go out for a night on the town.  It’s where they meet Louis and Javier who tell them about cage diving with sharks.  Lisa quickly tells her no, but Kate reminds Lisa that Stuart will see she is not boring when she posts the pictures online.  Lisa relents.  The next morning they get on the boat and Lisa starts to have doubts.  Kate reminds her to be fun and let loose.   Louis and Javier go down first and come back up.  Kate and Lisa go down next.  At first, they are having a great time.  But the wench breaks and the cage falls 47 meters down to the ocean floor (btw 47 meters ≈ 154 feet).  The wench is on top of their cage door, they can’t hear the captain in their mask, their air is running out, oh and they are surrounded by sharks.  No biggie.  Now they have to make it back the surface without being eaten or coming up too fast (which can kill them).  But first, they need to get the cage door open.

You can feel your heart pound and the oxygen slowly sucked out of the room.  As with all thrillers, just as the girls come up with a plan there is a shark, snapped line, blood in the water, and hallucinations.  They have so many warning signs that something bad will happen but continue for the once in a lifetime chance, and making an ex-boyfriend jealous.  This is a must for any dive or shark fan to see on the big screen.  While the twists and turns are foreshadowed and/or predictable, you are still lured into a false hope for the girls’ fate.  See this at the matinee price before it leaves theaters.

Just think of the pictures – Kate

I feel super uneasy about this – Lisa

You both know how to scuba dive right? – Captain Taylor

Get back in the cage – Javier