Six years ago, a brilliant mathematician and mother named Diana, went to her brother Frank for help with her newborn, Mary. Frank, a college assistant professor, was on a date and told his sister he could help tomorrow. The next day Diana committed suicide, leaving Frank to raise Mary. Frank gave up his job in Boston and moved to Florida. While being a freelance boat mechanic, Frank has been home-schooling Mary, but he believes she should go to school and be around children her own age. On Mary’s first day of school, her teacher Bonnie quickly realizes there is something special about the little girl. Bonnie believes she is gifted. Frank gives an easy answer to Mary’s abilities, but Bonnie alerts the principal. The principal urges Frank to put Mary in the Oaks Academy, but Frank says no and abruptly walks out. The principal takes matters into her own hands and calls Evelyn … Frank and Diana’s mother. Evelyn believes she should raise Mary with a proper education and the best of everything. Frank believes Mary should be around children her own age and socialize. Evelyn tries to reason with Frank, but when all else fails, she takes him to court. After a tough court battle, Frank and Evelyn compromise. However, this compromise will leave Mary in tears, Frank learning more about himself, and Evelyn learning more about Diana.

The writing in the movie is pure genius. The dialogue between actors flows with ease and grace. You quickly connect to Frank, Mary, and … in a way … Diana. You understand that everyone is doing what they believe is best for Mary, but it is easy to side with Frank’s point of view. Nonetheless, as Frank second-guesses his decisions, you start to second guess too. The screenwriter did an amazing job of making Mary sound like a smart girl with a child-like wonderment of the world. The one scene that stands out is Mary and Frank in silhouette, discussing God, in front of the sun. You are not focused on them, but their words. As Frank tries to navigate an adult conversation with Mary, she is jumping all over him like children do. It’s a strong and profound conversation. This movie is a must see and it will make you laugh, tear up, and drop your jaw. Full price is a steal.

This is going to be fun. You are going to meet kids you can borrow money from for the rest of your life – Frank

Fred’s not a killer. He’s a lover – Mary

I got a book on the Fundamentals of Decision Making. You can borrow it – Roberta

Six crew members (Hugh, Rory, Sho, David, Miranda, and Katerina) aboard the International Space Station are working to examine soil samples from Mars.  They discovered a dormant organism living within the soil and attempts to revive it by changing its atmospheric conditions.  Once they get the contained organisms atmosphere just right, it wakes up and reacts to stimuli.  After a contest, children name the organism Calvin.  Calvin is described as all muscle, all eye, and all brain.  Everything seems to be ok until there is an accident in the lab that leaves Calvin dormant again.  Hugh, a biologist, attempts to wake Calvin up with a mild electrical shock.   Calvin takes this as a threat and attacks Hugh, escapes from its enclosure, and engulfs a mouse.  Hugh believes that Mars’s atmosphere allowed it to be dormant for years, but they just brought it back.  The crew comes to a tough realization; Calvin can survive re-entry into earth’s atmosphere.  They must kill Calvin in order to survive and get back to earth.  However, Calvin knows he must kill the crew in order to survive.   With both species trying to survive, who will keep their LIFE?

Mix Gravity with Alien and just a dash of Planet of the Apes and you have LIFE.  This movie makes the best of nail-biting moments of tension and special effects.  The movie gives you 45 minutes to connect with each character, then picks them off one by one.  No spoilers on who will or won’t make it, but you will be able to figure it out before its revealed.  However, while it doesn’t do anything ground-breaking in suspense or space movies, it’s fun to watch.  You will close your eyes and peak during several tense moments.  Also, you will quietly hope some will survive because you know what is at stake for them back home.  But there could be a part 2.  See this movie at full price, but not 3D or IMAX.  And don’t stay past the end crawl.

All muscle, all eyes, all brain – Miranda

Jason, a high school star athlete, made a bad choice.  The results of his choice: an injured knee, an ankle monitor, the town of Angel Grove is against him, and he has to attend a school for delinquents.  Kimberly and Billy are both attending this school and are shocked to see the town star in their class.  On his first day, Jason makes in impression on Billy by defending him against a bully.  Out of respect and admiration, Billy offers to rig Jason’s ankle monitor and allow him to move freely around the town.  Also, Kimberly catches Jason’s eye with a quick bathroom makeover.  Billy convinces Jason to come to an old gold mine to find something he believes is below.  It’s near that gold mine that Trini and Zack are trying to escape from their home lives.  But when Billy causes a huge explosion which triggers a rock slide, they all fall into a deep ravine.  They see 5 glowing stones and break the stones out of the rock.  After an “impactful” night, they wake up at home with no memory of getting back and stronger than ever.  They decided to go back to the gold mine together and look around for an explanation.  It’s there they find a spaceship, Zordon, and Alpha 5.  Zordon explains they are the Power Rangers, but since they have their powers, a great evil will come back in 11 days.  The great evil, Rita, was a good Green Power Ranger.  But she became consumed with power and turned evil.  Over the course of 11 days, she will regenerate, build her Putty army, summon Goldar (her giant minion), find the Zeo Crystal, and destroy the world.  They must train to work together, fight, and morph or the world will come to and end.  But as they train, they can’t morph.  It’s something inside holding them back.  They must figure it out as a team or Angel Grove is doomed.

This film is better than expected.  Kudos are given to the writers by attempting to attract new fans and old fans of the original series.  With new graphic abilities and a “delinquent turned hero” plot, new fans are drawn into the story.  With original character names, colors,  and Zords, old fans get a treat of 90s nostalgia.  However with all the pros, please understand this movie may not be for viewers under 11.  These Power Rangers curse and make sexual innuendos.  So parents, be warned.  It does provide laughs, but it can get a bit sappy.  Nevertheless, that’s what the Power Rangers were known for in the past.  For 90s fans, consider this movie a 4-part TV special.  For new fans, consider this a normal teen superhero movie.  For 90s fans, keep your eyes open for 2 cameos.  Also, stay past the 1st end crawl … there are preparing for a part 2.  So if you are a new fan or an old fan, see it matinee with no advancements (3D, iMax, power recliner, etc).

We will die together Rita – Zordon

Can you stop touching me – Billy

I am a talking robot. You can trust me – Alpha 5

You’re crazy but so am I – Zach

Oh so you know I punched his tooth out – Kimberly

The Story of 90 Coins – Review 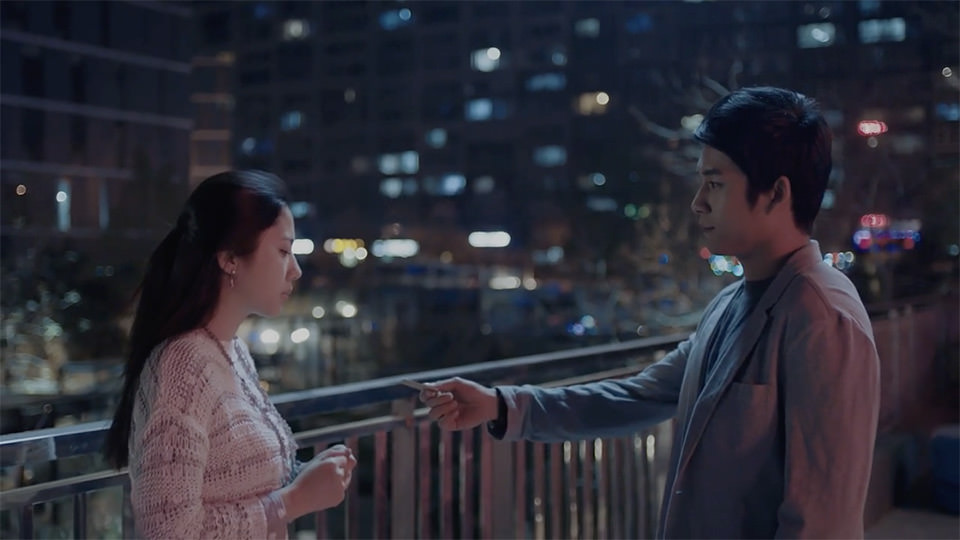 Wang knows that Chen is the love of his life, but Chen believes they are moving in different directions. Wang wants to grow old with her and make her happy. Chen wants a career first then love. But Wang has an idea. He asks Chen to give him 90 days to fall in love and each day he will give her a coin. If after 90 days she still doesn’t believe they should be together, they will use the money to get a drink, make one last toast, and say goodbye forever. But if she does want him, they will use the money toward a marriage license. As time moves on, only 2 things stand in the way of their epic romance: Paris and Andre (Chen’s colleague). But it’s the coins that hold the story of a beautiful promise.

This short film provides a better story and romance that most romantic films. You will want it to be longer, but that may compromise the beauty in the story. It’s in its simplicity that it shines. You get a chance to see the couple go through normal relationship ups and downs (i.e. missteps in romance, fun times, illness, strength, and death) through the story of the coins.  Give this one your full attention.