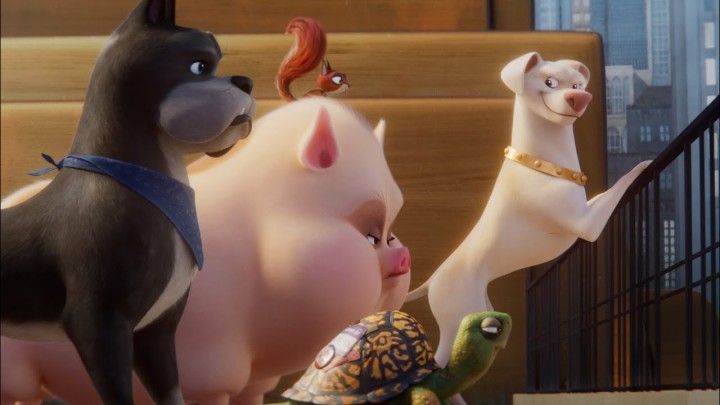 Before Kal-El’s parents sent him to earth, his puppy jumped in the spacecraft with him. Kal-El’s father wanted to pull the dog out, but Kal-El’s mother thought their baby would need a friend. Years later, Kal-El is Superman, who poses as the mild-mannered Clark Kent. And his puppy is a full-grown dog called Krypto, but his alter-ego is Bark Kent. They work together to fight crime, but Krypto has a bigger enemy, Lois Lane. Lois feels that Krypto is lonely, so she suggests Superman go to the pet store and get Krypto a friend.

When Superman walks in, the proprietor notices one dog, Ace, escaped. Superman uses his x-ray vision to see Krypto immobilizing the escapee. Superman believes Krypto isn’t ready for a companion, so he takes the pup home. Krypto prepares for a night in with TV with his best friend, but Superman has date night plans with Lois. So, Krypto cries in a tub of ice cream. Superman opens the door, but Lois isn’t there. It’s a guinea pig named Lulu. She shoots Superman with Kryptonite and throws him out the window. Krypto notices the giant hole in the skylight and runs after Lulu. But when he tries to fight, Krypto’s powers aren’t working. Lulu hid kryptonite in a piece of cheese that Krypto ate, so now he is defenseless. Then, Krypto recognizes Lulu.

Lulu was a guinea pig in Lex Luthor’s lab. And as he experimented, she watched and learned. Lex studied different types of kryptonite and discovered the orange one could give him powers. Before Lex could test his theory, Superman and Krypto stopped him and freed all the guinea pigs, putting Lulu in a pet shop with Ace. However, Lulu didn’t want Krypto to save her. She wanted to be with Lex and vowed to get back to him. When orange kryptonite came into orbit, Lex grabbed it, but the Justice League stopped Lex from obtaining it. Krypto and Superman got most of it back into space, but Lulu used her invention to bring a shard into the pet shop. It gave Lulu the power to move things with her mind. So she went to Superman’s house to start step one of her plan.

Krypto wanders aimlessly and without powers until she sees lightning shooting from the ground to the sky. He assumes it’s Lex and runs towards it. Instead, he finds Ace, PB, Merton, and Chip. Lulu didn’t know, but they all got powers from the shard. Ace is indestructible. PB, a potbelly pig, can grow and shrink. A near-sighted turtle, Merton, has super speed, and Chip, a squirrel, shoots electricity from his hands. Krypto thinks they should work together to stop Lulu before she destroys Superman and the world.

Adults, don’t be surprised if you laugh more than your children at this film. The action is for the kids, but the jokes are for the parents. The jokes aren’t sexual innuendoes, so don’t worry about that. This movie, based on the DC Legion of Super-Pets: The Great Mxy-UP, has the dark humor of a DC comic movie wrapped in adorable pets (FTC Affiliate Disclaimer). This movie has a turtle that swears, a dog with a dark backstory, and a squirrel going through an existential crisis. Although the animals understand each other, the audience gets a moment to see the animals through the humans’ eyes. Instead of threats, Superman hears Lulu’s adorable squeak. The film will strike a chord with pet owners while raising awareness about pet adoption, especially the older pets. The plot is a bit of Snyder’s Cut mixed with The Secret Life of Pets. Be prepared to laugh while your kids punch in the air. And there are mid and post-credit scenes.

This is unpleasant for the both of us – Krypto

I love you – Superman

I still have eight lives – Whiskers

I loosened it for you – Chip

You gonna act like you don’t know me – Ace

The student returns to the teacher – Lex Luthor

I’m still getting the hang of this – PB