A Tale of Two Coreys – Review

A Tale of Two Coreys – Lifetime – 2 hours and 2 minutes

In Toronto, Corey Haim’s father wanted him to continue focusing on school and athletics but Corey wanted to continue acting.  His parents made an agreement to allow him to pursue his dreams as long as he worked hard in school.  Haim started acting because his sister acted; now his career is taking off.  In LA, Corey Feldman’s parents are divorced and he is living with his grandparents.  He sees his mother when she needs something or to criticize him.  Feldman sees his father when he is looking for his mother.  He is often alone and left watching videos of his favorite singer Michael Jackson.  In order to help his acting career, Haim’s family move to LA.  At Feldman’s lowest point, Haim calls him to meet.  At the beach, the two learned they had more than their names in common.  They quickly became best friend and partners in crime.  But one day, Haim revealed a secret to Feldman.  He was molested on the set of Lucas (FTC Affiliate Disclaimer).  It’s not long before this molestation is a shared experienced between the Coreys which leads to a path of secrets, drugs, and destruction.

Following their careers through Lucas, The Goonies, The Lost Boys, and Dream a Little Dream, you wish this story could have had a happy ending for both boys (FTC Affiliate Disclaimer).  However, if you have followed the rise and fall of their careers, you hope for a triumphant return.  For one of the Coreys, this movie is the return to the truth.  For the other Corey, only time will tell.  With the latest revelations in Hollywood, it’s hard to believe this could NOT be happening.  With vulnerable children left alone, they are prey.  So watch this movie with your teens and use it as a platform for an honest, open discussion.

I think we might go see the goonies – Haim

I was kidding – Feldman

After a bad break up, Mel is in the dumps.  She believes she lost herself in her 5-year relationship.  Her best friend Leslie reminds her that she was a great athlete and she should get back to the gym and run again.  With a little hesitation, she goes and is approached by a handsome personal trainer Trey.  With one no-obligations, free session, she signs up for a gym membership and personal training.  The next day, Trey gives her a Fitbit and syncs it with her phone.  Also, Trey acts as her life coach.  But instead of letting people in, Mel is pushing them all away.  Trey will soon get what he wants, Mel all to himself.

This movie has a creepy first 5 minutes and an exciting last 10 minutes.  The rest of the movie is just slow.  This script is original but it doesn’t grab your attention enough.  There is just something missing in this film.   This movie can be skipped.

He guessed you could do it – Leslie 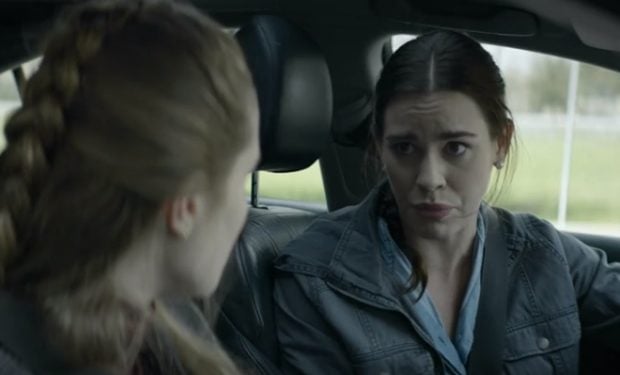 While taking a normal weekend out of town, Emily’s parents die in a car accident.  After an investigation, Emily is shocked to find out her parents were murdered.  Emily comes to a decision to hide that fact from her sister Lexie and her brother Ethan.   When Emily can’t make enough money to take care of the family, so she takes a job out of town and uproots her siblings.  Ethan goes with the flow but Lexie is having a rough time with all the changes.  And to make matters worse, alarms are constantly going off in their home, they are seeing shadows, and someone Emily knows dies.  The family believes someone is stalking them and will eventually kill them.  They have no idea what they are up against or who their parents truly are.

This is a crazy far-fetched mystery but that makes it fun to watch.  You know something is up with the parents but you aren’t really sure.  You know something is going on around the family but don’t know what it is.  This family is one secret away from hiding the truth or blowing everything out of the water.   While this isn’t a “don’t miss”, it’s worth watching if you need 2 hours to kill.

Caitlyn is an overworked office manager at Applique Magazine. She dreams of being a designer but her boss Abigail looks through her and her designs. Abigail is focused on her daughter Leighton to become the next big designer and gives her a spot in the AM fashion show. Abigail hears that Lady Isabelle and Prince Jeffery are going to have their New Year’s Eve ball in the city and knows the royal family proposes on New Year’s Eve. Abigail wants to make sure Isabelle is wearing one of Leighton’s design during this huge royal proposal. So they plan to meet with Isabelle during the fashion show to present their designs. After an insult from Abigail, Caitlyn changes out of her fashion show outfit into one of her own designs (picked by her best friend and roommate Doris), and Isabelle loves it. She decides to have Caitlyn design her proposal dress and Abigail work on the New Year’s Eve Royal Ball with her potential fiance Prince Jeffery. A bitter Abigail piles work onto Caitlyn and force her to work with Prince Jefferey on the Ball.  But the more Jeffery gets to know Caitlyn, he is impressed with her take on life and how she is underwhelmed by his crown.  It’s not long before the two are infatuated with each other.

This is one of the funniest Hallmark loves stories to date.  While the love story falls into place, you want to watch because of its pure entertainment.  There are a lot of quotable moments and Doris will become your best friend in your head.  The movie even takes time to make fun of itself.   The chemistry between the main characters jumps off the screen.  And Abigail’s only match is Miranda in The Devil Wears Prada (FTC Affiliate Disclaimer).  This will be a holiday favorite each year.

We work for a fashion magazine, no one ever eats – Doris

Yes, I think the shrimp cocktail won this round – Jeffery

He just needs to focus, distracts are such a terrible thing. Don’t you think – Isabelle