Barry Seal graduated top of his class in flight school; now he is working for TWA. To make extra cash, he smuggles Cuban cigars between flights. After a cigar drop, Barry is approached by CIA agent Monty Schafer with an offer. Monty will give Barry is own plane (the fastest double engine ever made) and a company called IAC. The catch is he has to use the plane to take pictures of the communist groups in South America. But Barry’s risky flights have garnered the attention of the Medellin Cartel. The cartel is poised to become the largest drug rings in the world. However, their cocaine can’t make it to America because of new custom busts and procedures. They want Barry to use is skills to flight the drugs into Miami. However, when Barry examines the Cartel’s plan he sees a few problems. First, Barry warns that that Miami is the worst place to smuggle drugs. He convinces them to drop the drugs in Louisiana. In Louisiana, he can trick air traffic control into believing he was an oil rig helicopter and clean the plane before inspection. Second, the Cartel’s runway is too short and surrounded by trees and mountains. However, the Cartel won’t budge. Barry must make this runway work. Finally, is a number of drugs they want to smuggle. The cartel doesn’t understand that the plane can only hold so much weight. Even with the promise of $2,000 per kilo, Barry warns them he can only fly 300 pounds at a time. With a few adjustments, Barry makes the trip and drops of the drugs. In a few years, Barry has ties to the Cartel, CIA, Contras, and the US Government. Soon, Barry can’t launder the money faster than he can make it. Even after Barry funds his town, traffic guns, and become everyone’s enemy.

American Made will leave you entertained and disgusted. While Barry falls into traps, he is never portrayed as a victim. He was already committing illegal acts before the government was involved. The government just gave him a bigger platform for his crimes. It’s hard to believe this is a true story, its the documentary style confessionals help drive that point. Also, the real clips of President’s speeches and congressional meetings remind you that this was all government funded and approved. Costume and set design did a magnificent job of placing the time period and financial changes in each scene. In one scene is set in the late 70s, the Seals have a late 70s modest TV. With a few years, they have an early 80s expensive TV. At some point, the film becomes comical as Barry gets out of criminal situations by committing more crimes for both sides. While this is a good film at full price, once is enough. And you will get a conclusion for each major character. Although some conclusion may not be satisfying, they are honest.

South of the border, north of the equator. Let’s just say an enemy of the state – Monty Schafer

I do tend to leap before I look. Maybe, I should have asked a few questions – Barry Seal

Well that sound f’ing made up Barry – Lucy

Til Death Do Us Part – Review

Madison and Michael are living a dream life. Madison, at the request of her husband, quits her job and becomes a full-time wife. While she loves her husband and home, she wants a baby. However, no matter how hard she tries she can’t get pregnant. She later discovers that her husband is taking shots. These shots make him impotent which infuriates Madison. When she claims he is just like his father, he hits her. He explains that she needs to be grateful and respect him home. Since he makes the money, he makes the rules. The abuse continues even when she becomes pregnant. But one night, Madison has had enough. As she attempts to leave, they fight and she rushes into her car. She speeds down the street and gets into an accident. Michael and Chelsea, Madison’s best friend since high school, are informed that she and the baby died. Both Michael and Chelsea are heartbroken. Michael even considers suicide. But one phone call will turn Michael from suicidal to murderous.

Give credit where credit is due. The movie is compelling and gives a realistic story. There isn’t any fancy hacking or millionaire family to aid the storyline, just everyday life events, and knowledge. It’s easy to see Michael’s controlling ways in the beginning. The great part of this movie is that it displays how control can be misinterpreted as love and/or concern. Madison hopes for change, but the baby seals her fate. Although this movie explains the gradual decline into abuse, you are not given a reason for Michael’s controlling ways until the end. Knowing this would help the viewer understand why Michael snaps at being compared to his father and partially why he is controlling. Also, things happen in the movie that makes you wonder if it really happens, if it’s a dream, or if it’s paranoia. So, you are often left confused. The realistic events take it from an overpriced Lifetime movie to being worthy of the big screen at matinee price. And don’t be surprised if the song Living for the Love of You feels creepy for a while (FTC Affiliate Disclaimer).

You are the only good thing that has happened in my entire life. I don’t know how I would live without you – Michael

Watch out for the good ones – Chelsea

After speaking with a patient whose heart stopped, Courtney (medical student and sole car crash survivor) becomes obsessed with the afterlife. She decides to create an experiment. But she will need help. First, she asks Sophia. Sophia tells her that she can’t help because she needs to study. Sophia’s mother put all her money into Sophia’s education. So Sophia is determined to focus and become a doctor. Next, Courtney asks Jamie to help. The playboy can’t help but to believe she is asking for sex, so he agrees. All three end up in the basement of the hospital. In the basement is a fully functioning hospital in case of a natural disaster. Courtney finally tells the two what she really wants to do. She wants to die for a minute and map her brain activity like they do during a seizure. Then after the minute is over, Sophia and Jamie will bring her back to life. Sophia quickly says no but Jamie agrees to do it. As Courtney lies dead, Sophia and Jamie have a hard time bringing Courtney back. Sophia panics and calls Ray. Ray has the most experience of any student in the hospital and runs to help. Marlo, who is constantly competing with Ray, sees him running and follows. After a few seconds, Courtney is back. And she has perfect recall of everything she has ever learned and sees life with a new respect. Marlo, Sophia, and Jamie are in awe of Courtney’s new abilities, and Jamie decides to go next. However, he wants to go in for 2 minutes. Soon it will be Marlo and Sophia’s turn but Courtney and Jamie have been keeping a secret. Besides enhanced abilities, they are experiencing a bad side effect. Their guilt is hunting them down one by one. Now, they have to face their past in order to have a future.

A remake of the 1990 film Flatliners, this movie has the same premise but a different ending and different reasons of guilt (FTC Affiliate Disclaimer). While they die, the audience is given a different view of the afterlife. Also, as the beautiful imagery turns dark, it gives clues to what each person feels guilty for doing in their past. There are a few moments that will make you jump. However, they are all predictable. While some things have been changed to create a new movie, 1990s fans will be satisfied with the changes. While this is a remake, it’s more engaging than the original. So the overall content makes up for the lack of fear. This should be qualified as a thriller, not a horror. So see it with your friends at the matinee price and determine what is a good day to die.

I’m gonna be the Anderson Cooper of medicine – Jamie

Was it all fun? – Courtney

Well I don’t care how dangerous it is – Sophia

You were ok – Ray

It won’t bring him back – Marlo

Is there something you aren’t telling me – Dr. Barry 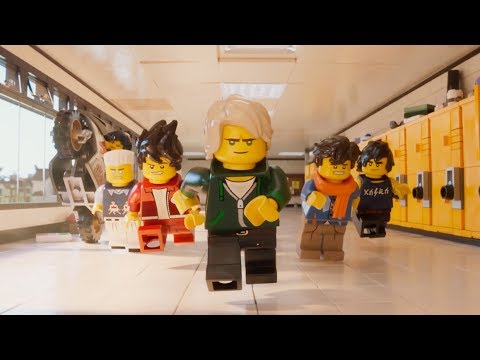 Lloyd is living a double life as an enemy and a hero. Lloyd is the son of Garmadon. The most dangerous villain of Ninjago City. Often, he attempts to take over the city and destroys everything in his path.  Since this villain is his father, the town turn on Lloyd. They write songs about him, tweets about him, and avoids him at every chance they get. But what the town doesn’t know is that Lloyd is the leader of the Secret Ninja Force. The Secret Ninja Force is made of the following:

As a team, they defeat Garmadon’s plans but continue to let him walk away. Ninjago citizens are confused but the team knows that Lloyd just can’t destroy his father. He is constantly hoping his father will love him and acknowledge all his wrongdoing. But after one intense battle, Lloyd has had enough and decides to use the Ultimate Weapon to destroy Garmadon. With one mistake, a monster is released on the town and Garmadon gets the weapon. Soon, Garmadon has taken over and everything is lost. But Master Wu tells Lloyd they still have a chance to save Ninjago. All they need to do is get the Ultimate, Ultimate Weapon. So the team follows Wu to crossing the Forest of Dangers, into the Canyon of Death, and up the Temple of Fragile Foundations to find the weapon. With Garmadon on their heels, the team will fight and find inner peace to save Ninjago.

Well, it’s cute. This movie has a strong start, weak middle, and sweet ending. With the third installment, the graphics are not enough to excite the viewer. A viewer knows they have the technology to make legos come to life, so more focus needs to go to the story. When children and adults fall asleep, more needs to be done. While the movie does get slow, it drives a great story of family and forgiveness. It has plenty of laughs for adults and children, Master Wu is the gem of the story. His knowledgeable antidotes and near death experience could only be accomplished by a true master. But, 3D is not necessary and see it at the matinee price if you have children. Otherwise, wait for Redbox.

Have you been to high school? It’s judgy extremely judge – Lloyd

If you can see me, why don’t you shoot me – Garmadon

No, he didn’t join forces with his father. Like your husband’s a saint – Koko