The Mole (1 week): As the men are driven out of Dunkirk, France they are forced to the beach. Tommy sees Gibson burying a fellow soldier. No words are exchanged before German bombers are shooting from the air. After the shots die down, Tommy and Gibson find a wounded comrade and carry him to the nearest ship for evacuation. The British ship is only accepting British soldiers, so Tommy and Gibson feel safe. Until the captain tells them the ship is full, they will only except the wounded. The two hand over the wounded soldier but hide below the dock. They learn that the British believe that of the over 400,000 men, they will only be able to save 40,000. Tommy and Gibson’s hopes of survival nearly defeated. With home 26 miles away, can both men make it?

The Sea (1 day): Mr. Dawson has heard the call from the British navy. The need to commandeer their vessels to save the men on Dunkirk. He and his son Peter remove anything not needed and load their boat with life vests and head to Dunkirk. Just as they are about the ship off, George jumps on to help. He believes he will be of service to the two. Within hours they find a soldier that is shipwrecked and shell-shocked. When the soldier learns they are going back to Dunkirk, he panics and violently bumps into George. George hits his head and is bleeding badly. Mr. Dawson must decide to save one or save several.

The Air (1 hour): Spitfire pilots Farrier, Collins, and their leader trying to keep the enemy bombers at bay so the land soldiers can have the means and time to evacuate. In the first few minutes, their leader is taken down and Farrier takes command. He realized that he and Collins are low on fuel and have to conserve their resources while maintaining enough fuel to go back. But after Collins is forced to make a water landing, enemy bombers are en route to Dunkirk. Farrier must stop the bombers and get back with only reserve tanks at his disposal.

Please see this movie in 70 mm if you can. This wide high-resolution film gauge gives you the best perspective while making it feel like a documentary. Remember you are watching 3 different stories which all have their own duration of time. The mole, which is the story of the land battle, is told over the course of a week. The sea’s timeline is told over the course of a day. The air is told over the course of an hour. So if you see night time, the movie has switched to the land story. Then, it will drastically change back to daytime to tell the air or sea story. Of course, all 3 will come together at the end, but all three stories are expressed vividly. You will feel yourself become nervous each time you hear a plane’s engine above. You will feel happy when the men are saved and dread when they are attacked. It is an emotional film that will draw you in with stunning cinematography and painstaking attention to details. There is no character build up in Dunkirk, it immediately starts with war. This is one to watch, but be warned the war scenes are realistic, honest, and brutal. This is a must-see.

Men my age dictate these wars. Why should we only allow our sons to fight – Mr. Dawson

Come on private. I know we are officers. But it’s either us or the enemy – Commander Bolton

Then be careful with him – Peter

Valerian and the City of a Thousand Planets – Review 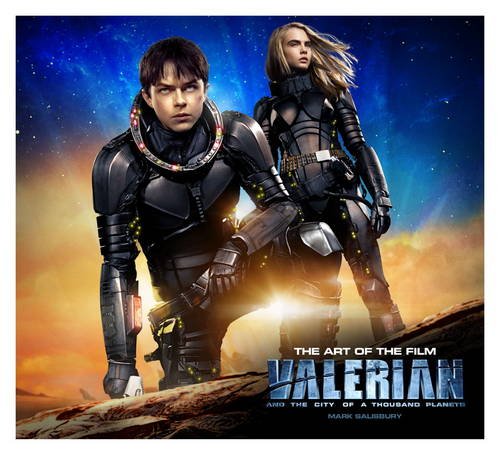 While relaxing on the beach, Valerian is awakened by what feels like a dream, but much stronger.  He is joined by Laureline who reminds the eidetic that he has forgotten something.  Her birthday.  The two flirt back and forth until they get a mission.  They must go to the Big Market to retrieve a Converter.  The Converter is an animal that is the last of its kind.  When Valerian gets the converter, he also steals a pearl that he saw in his dream.  Once he and Laureline complete their mission, they go back to their home base, Alpha.  After returning, Laureline has become fond of the Converter and doesn’t want to give him back to Commander Filitt.  It’s still sick and she wants to wait until the Converter is better.   Commander Filitt gives Valerian and Laureline their next mission: To protect him.  He holds a government meeting to inform the United Human Federation that there is an infection on Alpha and it’s spreading.  They need to remove it or it will take down the entire ship.  As a plan is being put in place, everyone in the meeting is incapacitated and Filitt is kidnapped.  Valerian goes to save him but he goes into the infected area of Alpha, crashes, and loses all contact.  Now Laureline has to find Valerian, save the Commander, and stop the infection.

Based on Valerian and Laureline by Pierre Christin and Jean-Claude Mézières, this movie is a feast for the eyes (FTC Affiliate Disclaimer).  With all the different types of aliens, habitats, and ships, it’s a lot to take in.  While this the story is not terrible, it’s predictable.  Especially in this genre.  And while that story is fun, it’s slow.  Even with all the graphics, your mind will wander.  The chemistry between Valerian and Laureline was spot on and funny.  Laureline knows Valerian is a player but he wants to make a commitment to her.  So their back and forth banter is easy going and good natured.  However, 30 minutes could have been taken out of this movie and it would still have the same impact.  So if this is your genre, see the matinee and no 3D.  Otherwise, wait for Redbox.

Except when you remove their little buddy – Bobby

Is that a yes – Valerian