A Rose for Christmas – Review

A Rose for Christmas – Hallmark – 2 hours and 0 minutes

The Bulldozer, Cliff, has been given a mission: oversee the float decorations for his company’s Pasadena Tournament of Roses Parade entry. If Cliff gets the float done on time and under budget, he is a shoo-in for the Executive position at the upcoming Shanghai office. Andy, art teacher, has taken on the task of running her father’s company, Sunshine Floats, while he is begrudgingly away on doctor’s orders. Even with Big Al’s, her father, support Andy still worries about getting the float done with little time and even less volunteers. If the float is not complete, she may lose her father company. With weeks until the parade, Cliff flies down to manage the float. His no nonsense, get-it-done attitude will definitely clash with Andy’s happy chaos. These two must come together to ensure Cliff gets his promotion and Andy keeps her father’s company.

Not the best but still pretty good. You know love is in the air with this Hallmark movie, but is doesn’t pushed the main story into the background. This is the movie’s saving grace. You get to know the townspeople, their connection to each other, and how building the float helps them. The jock, parade queen, trucker, and scaredy cat all help and become inspired by building this float. It’s great to see it all come together in the end. This movie is nice to DVR and save for later, but don’t cancel plans.

You look too old to be a baby sitter – Andy

It’s a float, how difficult could it possibly be – Cliff

Why do I bother? You never listen to me anyway – Big Al

Mommy I Didn’t Do It – Review

It was just 4 years ago when Ellen Plainview was accused of a brutal assault she didn’t commit. After a horrible attorney, Ellen decided to defend herself and won. She later found the real attacker and went to law school. Her harrowing story inspired, her boyfriend, Ben’s book, “The Wrong Woman”. Now, Ellen is finishing law school and her daughter, Julie, is just months shy of graduating high school, when the unthinkable happens … Julie is accused of murdering her teacher. She is quickly taken to jail and with the evidence stacked against her.  The found fingerprints in Mr. Dutton’s car, an eyewitness saw her, and she texted him threatening message.  She is given a $750,000 bond, but Ellen knows she doesn’t have the money to pay.  Again, Ellen must work to prove someone’s innocence … her daughter’s.

This The Wrong Women sequel packs more suspense then the first. It’s recommended that you watch the prequel to get a better understanding of the characters, noteworthy lines, and jokes. This movie is updated by using text messages as evidence and is amped up by a murder instead of an assault. Mommy, I Didn’t Do It has twist and turn at every 5 minutes with a missing knife, partial truths, and a shocking conclusion. Halfway through the movie, you may believe YOU did it. It will be easy to get mad at Julie when she snaps at her mom, but remember she is a teen under a lot of pressure. Also, its a Lifetime movie, so all teens are brats. Sit back with your wine and reveal in a sequel well done.

What’s this about? – Mr. Dutton

I need a ride and you need some exercise – Julie

Gene, do you mind? – Officer Vickie

You know the drill – Officer Hamer

I know guilt when I see it – Mrs. Dutton 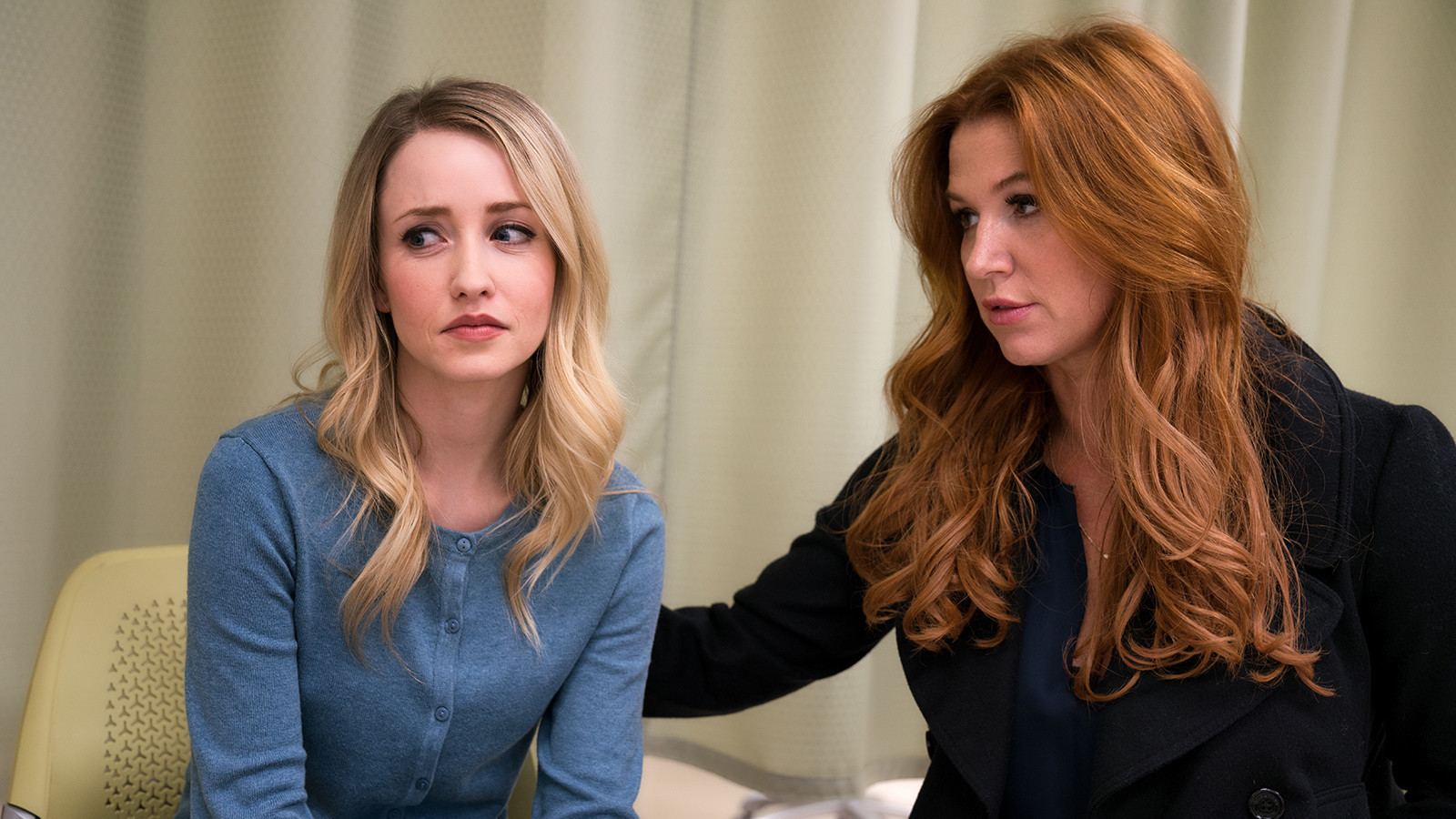 Shelley, out of guilt, told her sister, Angela, a huge secret. She had been lying to their mother, Joan, up to the moment of Joan’s death. Shelley never told Joan she could not get pregnant. Shelley didn’t want to disappoint her mother’s excitement of one day becoming a grandmother. Shelley wants to have a baby but just can’t. So Angela offers to be a surrogate for Shelley and David (Shelley’s husband). During the pregnancy, Shelley starts to worry about her marriage because David is cold and distant. Also, Angela’s ex, Curt is trying to reconnect and start a relationship, but doesn’t know she is pregnant. Likewise, Angela is not to fond over David and makes her feelings known. And, David is keeping a secret from everyone … except is co-worker Nora. With all this drama, the questions that remain are: Who Killed Joan and why?

So when Lifetimers see “…’s Nightmare” in any title you make assumptions. Don’t. This movie is not what you think. It has more misdirects than most Lifetime movies, however the killer is giving within the 1st hour. But that is not where the “Nightmare” ends … it’s just getting started. A Surrogate’s Nightmare has more family secrets than a Tyler Perry movie. You will end this movie saying WTF. This movies only problem is Poppy’s accent going in and out. It’s hard to determine if her character is foreign or not. It became quite distracting. Otherwise, sit back and enjoy a fun trip.

I am optimally cautious – Shelley

You don’t think we rushed into this, do you? – David

It was complicated … our relationship – Angela

I know about my damn record, all right – Curt