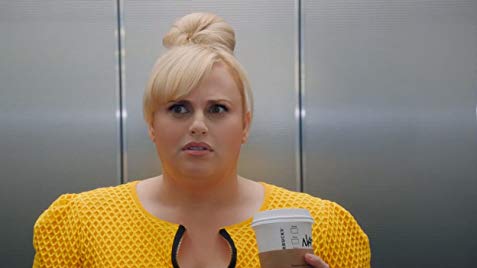 Natalie’s mother told her that Rom-Coms are not meant for women like them.  They were no Julia Roberts.  25 years later, Natalie is a budding architect and the thought of Rom-Coms makes her gag.  She believes they tell lies to single women and fall into the same tired cliches.  Her assistant Whitney loves them and watches them all day long.  Her co-worker Josh likes them too and believes Natalie would is she just open up more.  Whitney points out that Natalie is friend zoning Josh but Natalie sees Josh staring at the model on the billboard outside her office window.  Natalie feels ignored, unappreciated, and overlooked.  Just the way she believes she will always be seen and treated.  After getting off a train, Natalie is mugged. When she attempts to get away, she runs face first into a metal pillar.  She wakes up in a beautiful emergency room with a gorgeous doctor.  Her apartment is twice as big with a full closet.  Her neighbor, Donny, is now her stereotype gay best friend.  Whitney is her sworn enemy.  And Josh catches the eye of the model outside Natalie’s window.  It finally hits Natalie that she is stuck in a Rom-Com and its PG-13.  She must find someone to fall in love with her to get out of her nightmare.

If you hate romantic comedies, this is the movie for you.  If you love romantic comedies, this is the one for you.  It makes fun of every prosaism while Natalie is living it.  And she rolls her eyes the same time you do.  Having a character say exactly what you are thinking will make you gleeful.  It does pay tribute to movies like Pretty Woman, The Wedding Singer, and Love Actually by making fun of them (FTC Affiliate Disclaimer).  Even though it does make fun of the movies, it still ends like one.  So, be prepared.  Make this your date night movie for everyone to enjoy.

Thank you. That’s what all the guys say – Natalie

You said gay Beetlejuice 3 times and I appeared – Donny

Is she choking? – Josh

Ryan wakes up in his van and walks toward his dorm room.  He surprises Tree and Carter when he enters to get new clothes.  They promptly kick him out to keep kissing.  He goes to the lab where he is working on SISSY with his classmates.   SISSY, Ryan’s thesis project, will allow them to pause time.  But after months with no progress, the faculty advisor wants it shut down.  Ryan goes to the back to get the supplies to break it apart when he is stabbed in the chest.  Then he wakes up in his van.  He surprises Tree and Carter but he tells them about the deja vu he experienced.  Tree instantly tells him everything she had to do in the past to survive.  For the quid pro quo, Ryan tells her about SISSY.  She realizes that he didn’t freeze time, he started the loop.  Tree decides to finds Ryan’s killer and stop the loop.  When they do find the killer, they are stunned and are urged to start SISSY to fix it.  The moment they turn SISSY on, the faculty adviser runs and disrupts the machine causing it to explode and knock everyone backward.  Tree wakes up to the same loop again.  But something has changed.  Danielle is nice, Lori likes her, and her mom is alive.  She, Ryan, and Carter realize she is in the same loop but a different dimension.   She must decide what dimension she wants to be in, who is trying to kill her now, and if she can spare someone’s life.

If you are a fan of Happy Death Day, don’t see this movie.  All of Tree’s hard work to become a better person is thrown out of the window for a sci-fi ploy.  It is ridiculous and unnecessary.  This movie strays so far from the original it is unrecognizable.  If this movie was the first to come out, a second would have not been made.  While it does retain its sense of humor, it loses everything else.  Wait for Redbox.

So sorry. No speak of the English – Ryan

I’ve gotta get out of these disgusting clothes – Tree

My head’s the middle one – Danielle

My mouthguard. I grind my teeth – Carter